‘Leaving No One Behind’: The Challenge of Reaching Migrant Populations
Previous Article in Special Issue

Planetary health, formally defined as the interdependent vitality of all natural and anthropogenic ecosystems—social, political, and otherwise—is a vast concept that has now entered the scientific lexicon. The problems associated with planetary ill-health—biodiversity losses, climate change, environmental degradation, and other problems of so-called “anthropocene syndrome”—are considered so enormous that they can immobilize us; we may feel environmental guilt, but that alone cannot save us or the planet. What is missing is environmental empathy, the nurturance of our capacity to recognize the planet and its many life forms as more than elusive entities to be objectified. Although experts in planetary health have called for a more sophisticated understanding of the psychological connections between humans and the natural world, these appeals are almost exclusively cordoned off from the taboos of science; applying concepts of “self” to non-human animals, and especially non-mammals, are generally proscribed. Here, I will personalize the planetary health concept by describing my research-based endeavors on the Great Barrier Reef—experiences that would change my scientific career and personal life forever. The small damselfish, Pomacentrus amboinensis, became the teacher; the student-in-me departed the reef with an education in environmental empathy, and a greater understanding of the urgency with which we must alter our teaching in ecology and other branches of science. Planetary health as a unifying, multidisciplinary effort generally lacks a narrative perspective in academia; I am hopeful that others will share their narrative perspectives and, in doing so, foster the growth of environmental empathy. View Full-Text
Keywords: planetary health; ecosystems; climate change; coral reef bleaching; Anthropocene; Environmental Guilt; Environmental Empathy planetary health; ecosystems; climate change; coral reef bleaching; Anthropocene; Environmental Guilt; Environmental Empathy
►▼ Show Figures 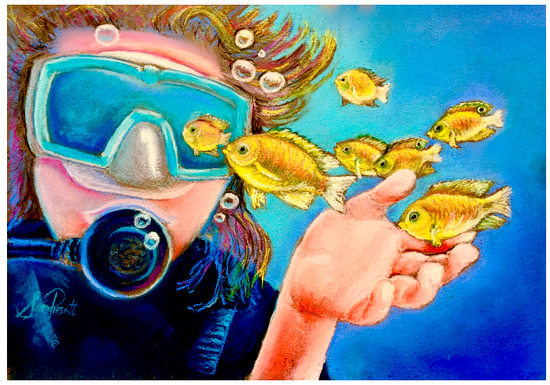