The technique of adsorption of polonium onto metal surfaces by spontaneous deposition has found applications in the analysis of environmental samples such as marine sediments, foodstuff, water, and tobacco since the 1960s. Silver foil has been preferred by many scientists but can become quite expensive for routine analysis. Deposition onto copper was first proposed in the 1970s, but has remained poorly studied. In the present study, the cost-effective and rapid optimum conditions necessary for the optimal recovery of Po from aqueous solutions during spontaneous deposition onto copper foils was evaluated while minimizing the deposition of Bi and Pb, which may interfere with subsequent analyses. A series of experiments was performed to determine adsorption yields for Po, Bi, and Pb to copper foils for a range of pH values from 1.0 to 5.5, with and without stable Bi and Pb carriers. Different methods for cleaning the copper foils were also compared. After initial measurements, Po, Bi, and Pb were desorbed from the disc in plating solutions without added activity. At higher pH values (3.0 and 5.5), less Bi was adsorbed to the copper foils, and subsequent desorption removed up to 99.1% of the plated Bi. The polonium yield remained fairly constant at all pH values and was unaffected by the desorption process. There was also no measureable increase in the polonium activity after 33 days, suggesting that Bi and Pb were not significantly co-deposited. All three cleaning methods performed well, whereas uncleaned foils in the same solution showed limited uptake. The use of copper foil under the optimum conditions described here could provide a valuable alternative to the use of silver in 210Po analyses. View Full-Text
Keywords: polonium analysis; copper foils; 210Pb; sediment polonium analysis; copper foils; 210Pb; sediment
►▼ Show Figures 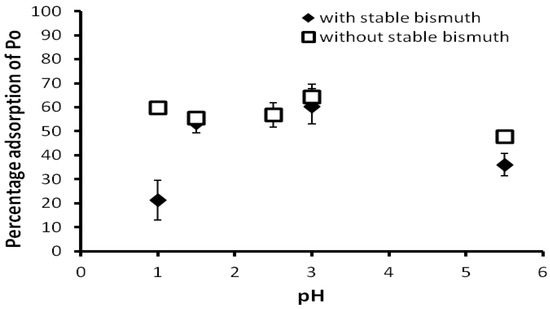