Bees in the D: A Message of Conservation from an Urban Environment

Throughout history bees have been a symbol of prosperity, success, rebirth, and resurrection that the non-profit beekeeping organization, “Bees in the D” [1], believes beautifully mirrors the spirit of Detroit, Michigan, USA. For example, images of bees can be seen in much of the iconic architecture throughout the city, such as the Fisher building, the Guardian building, and the Masonic Temple. The city of Detroit, dubbed the Motor City as part of what has been termed the Rust Belt in the USA due to its dependence on industrial manufacturing which has been in decline and has negatively impacted the region and its people, is currently undergoing a second renaissance that is elevating its arts, technology, and even urban farming. Beyond being architectural embellishments, honey bees and urban environments, such as Detroit, have a mutualistic symbiotic relationship.
Not long ago, beekeeping across America was showing a great decline due to complications and misunderstandings. Beekeepers, especially in the more urban areas, were hiding in the shadows and “out of sight, out of mind” became the common theme. However, as more and more media outlets reported the decline of honey bee populations and Colony Collapse Disorder [2], the phenomenon that occurs when the majority of worker bees in a colony disappear and leave behind their queen, plenty of food and a few nurse bees to care for the remaining immature bees and their queen, the general public started to show more interest and concern. Beekeeping started to emerge from the shadows, people wanted to learn more, and there has been an increase in interest in becoming hobbyist beekeepers.
Bees in the D sees amazing potential with the abundance of rooftops and vacant lots throughout Detroit that are mostly underutilized. Studies have shown honey bees travel an average of 2–3 miles from their hive to gather pollen and nectar. Bees in the D have introduced over 6,000,000 new honey bees to the area which are positively affecting produce and flower pollination at urban farms, orchards, and community gardens. Much of the produce is harvested and provided to other local charities, soup kitchens, food pantries, homeless shelters, and local community members for free. These bees will pollinate an area of 117 square miles, about 640 acres. During these foraging expeditions, the bees in turn pollinate the countless green spaces and urban farms throughout the city, illustrating the vital role honey bees serve as residents of Detroit.
This initiative is about much more than just finding homes for honey bees—our goal is conservation. The primary mission of Bees in the D is to create a cooperative effort between residents, schools, organizations, and businesses in the city of Detroit and southeast Michigan to contribute to both the health of honey bee colonies and the education of their importance to our urban environment. To accomplish this, Bees in the D organizes and hosts community events such as honey harvests, educational classes on the basics of how to become a beekeeper, interactive children’s educational events, and speaking engagements about honey bees, pollinators, and gardening.
Just like businesses across the United States, businesses in Detroit are also understanding the importance of making more “green” and sustainable decisions [3,4]. Green roofs, urban gardens, and yes, even apiaries (i.e., collection of beehives) are popping up throughout the city and surrounding areas. In two short years, Bees in the D has grown urban beekeeping exponentially (Figure 1). Starting with only six hives in 2016, Bees in the D managed a total of 102 hives at the end of 2018. Some places you may spot their honey bee hives include, on the Cobo Convention Center’s green roof on the Detroit River, the newly renovated Detroit Foundation Hotel located in a former fire station, Bedrock Detroit’s iconic Free Press Building, and at the State of Michigan’s Department of Natural Resource’s Outdoor Adventure Center. They can also be found in urban gardens at Detroit Abloom, Michigan Urban Farming Initiative, and historic Palmer Park. Bees in the D has built partnerships with each of the “Big 3” auto companies (i.e., General Motors, Ford, Fiat-Chrysler) as well as many other large corporations.
The Detroit community has further welcomed the benefits of urban beekeeping. The honey collected from the Bees in the D beehives have been featured in both food and beverages in the local Detroit hospitality industry (Figure 2). Jars of our honey have also been donated to local charities and small businesses for fundraisers and giveaways to benefit Detroit communities.

Bees flew into and became an integral part of my life almost a full decade ago. I work full-time as a fifth-grade teacher in Rochester Community Schools. In 2009, the Women’s Garden Club of Rochester approached the Rochester school district with the offer to send a teacher to the Central Michigan University Biological Station on Beaver Island to take a beekeeping course through Oakland University. This is when I caught the “bug” and began beekeeping at my home in Lake Orion, while also helping to manage the apiary located at Oakland University.
These bees came into my life at a point where I was struggling and had uncertainty. The bees gave me a new purpose and I found that managing the hives had a calming nature, even referring to beekeeping as “my yoga”. In 2013 I met my husband, also named Brian, and we decided to be a part of the revival of Detroit and moved to the city. While in Detroit, I noticed the lack of bees on the flowers in the city parks and wondered why that was. After doing some research, I soon discovered the sad realization that honey bee populations were in decline worldwide, and not only bees, but all pollinators were in trouble. Remembering that the bees were there for me when I was going through personal challenges, I felt compelled to create a non-profit organization that would focus on the education and conservation of honey bees and other pollinators.
Surprisingly, the process of forming a non-profit was not as difficult as my husband and I anticipated. Detroit is frequently nicknamed or referred to as “the D”. My husband Brian and I were referred to as “the Bs” by our friends and when they would go visit us in Detroit, our friends would say, “We are going to go see the Bs in the D”. This saying led to the perfect name for the organization, Bees in the D. Once Bees in the D received its 501(c)3 status (a legal designation for a non-profit organization in the US), we wanted to become a community resource. The community has been receptive not only to the mission of Bees in the D, but also their creative and collaborative way of sharing it.

My husband and I originally thought bringing the passion of beekeeping and conservation into a large city would be a challenge. To our delight, the reception has been mainly positive and supportive. One of the greatest challenges we have discovered is simply the lack of education and ongoing misconceptions. Most people do not know that there are many different groups of insects that have similar physical characteristics such as, bees, wasps, and hornets; however, these insects have significantly different ecological roles. For example, dispelling the bad reputation wasp species, like the abundant yellow jacket, give honey bees can be a challenge. However, with education, honey bees are usually seen in a new, and completely separate, light.
An additional challenge Bees in the D occasionally encounters concerns program funding and overhead. Still being a small, up-and-coming, non-profit organization that consists of a board of ten members, and operates 100% through volunteers, it is sometimes difficult to drum up the participation of donors, especially during the honey bee off-season. To address this challenge, we use social media to spread information about or group, its mission and our activities.

4. Ongoing Success and Future Goals—Partnerships Are the Key

Bees in the D has always seen the need to help with education and the efforts of conservation. Throughout our three-year presence, Bees in the D has raised over $200,000 USD to help with the declining bee populations and have educated thousands of individuals on the importance of pollinators. We have even collaborated with engineers at General Motors to build a prototype beehive out of the housing of a Chevy Volt battery. Phase II of this project will be to develop a STEAM: An educational approach to learning that uses Science, Technology, Engineering, the Arts and Mathematics for students to develop a better beehive based on this prototype and reuse automobile components that otherwise were destined for the landfill.
We are also excited for the upcoming bee season in 2019, to offer access to a select number of our Detroit bee hives to Dr. Gregor Reid and Dr. Brendan Daisley from Western University and Lawson Health Research Institute in neighboring Canada in order to study the microbiome of honey bees and explore possible solutions to help with the many pathogens and diseases that plague their populations [5,6]. Indeed, emerging research indicates that honey may have a prebiotic effect, encouraging the growth of beneficial microbes in the gastrointestinal tract [7,8].
Moving into the future, Bees in the D hopes that these collaborations will continue to grow, and new collaborations will emerge, not just in the city of Detroit, but throughout the world. Bees in the D will continue to build the Motor City’s Bee Highway. This Bee Highway will become an interactive collaboration of residents, businesses and municipalities helping to provide the essentials of food, water, and shelter to pollinators. This can be as simple as putting out a bowl of water with rocks that can serve as a landing pad and source of water for the bees. It could include putting pollinator friendly plants in your yard, garden, or even a pot on your patio to provide nectar and pollen rich food sources for pollinators. Others may even be interested in providing shelter by making native bee “condos” or even learning the amazing art of beekeeping. Bees in the D is excited to educate more groups and individuals about the important ways that they can get involved and teach them the importance of honey bees and native pollinators. To that end, Bees in the D is fundraising to repurpose a blighted lot and build an educational center that will be open to the public so that the group’s mission will continue to be fulfilled while contributing to the vibrant revival of the city of Detroit.
“Sustainability starts with you” is on the homepage of the Bees in the D website [1]. This is a motto deeply ingrained in this organization. Moving forward Bees in the D will stay committed to our mission: We are here to educate on the importance of pollinators and the conservation of the honey bee while building a network of urban honey bee hives throughout Detroit, southeast Michigan, and internationally in Canada.
Most important of all, we hope that this will be of inspiration to others to take steps towards ecological solutions, in any and every form, within their own communities.

This author received no external funding for this work. 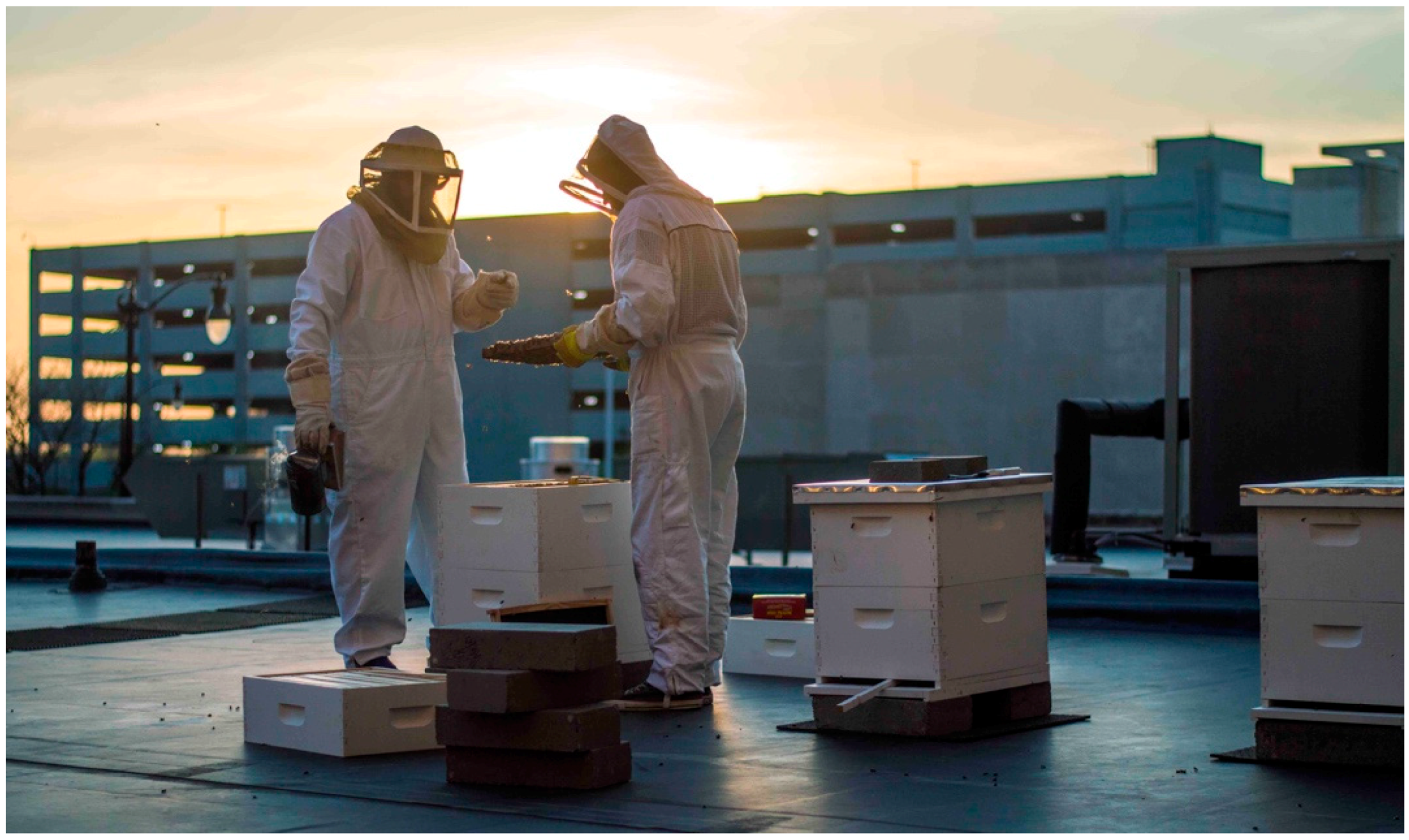 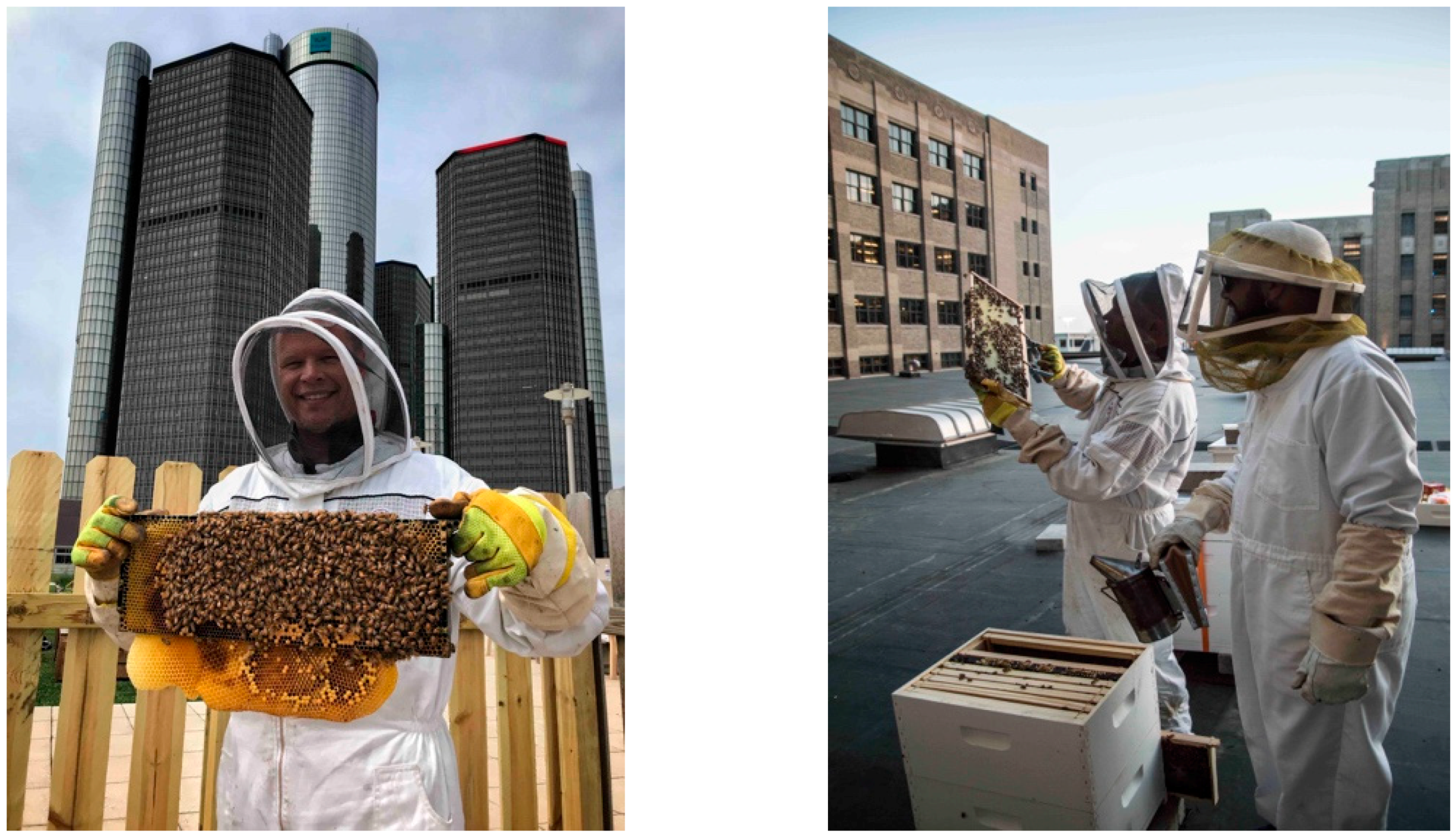