Framing Islam/Creating Fear: An Analysis of U.S. Media Coverage of Terrorism from 2011–2016
Previous Article in Journal

Fighting Rage with Fear: The “Faces of Muhammad” and the Limits of Secular Rationality

Scholars have identified Muslims’ religiosity and faith practices, often believed to be more intense than those of other religious groups, as a point of friction in liberal democracies. We use computer-assisted methods of lexical sentiment analysis and collocation analysis to assess more than 800,000 articles between 1996 and 2016 in a range of British, American, Canadian, and Australian newspapers. We couple this approach with human coding of 100 randomly selected articles to investigate the tone of devotion-related themes when linked to Islam and Muslims. We show that articles touching on devotion are not as negative as articles about other aspects of Islam—and indeed that they are not negative at all, on average, when focused on a key subset of devotion-related articles. We thus offer a new perspective on the perception of Islamic religiosity in Western societies. Our findings also suggest that if newspapers strive to provide a more balanced portrayal of Muslims and Islam within their pages, they may seek opportunities to include more frequent mentions of Muslim devotion. View Full-Text
Keywords: Muslims; Islam; newspapers; media; Britain; United States; Canada; Australia; devotion; religion Muslims; Islam; newspapers; media; Britain; United States; Canada; Australia; devotion; religion
►▼ Show Figures 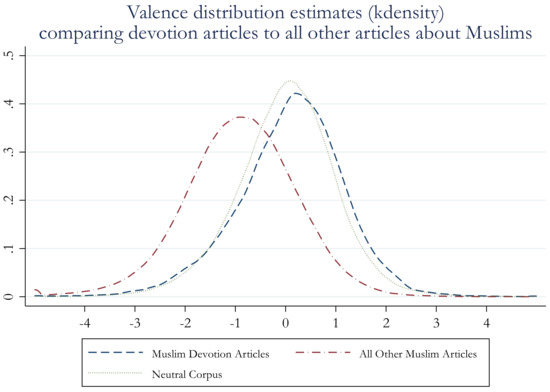