NGOization of Islamic Education: The Post-Coup Turkish State and Sufi Orders in Africa South of the Sahara
Previous Article in Journal

Effect of a One-Week Spiritual Retreat on Brain Functional Connectivity: A Preliminary Study

Daniel A. Monti
1 and

The Thomas Jefferson University Institutional Review Board for human subjects and Radiation Safety reviewed and approved the study protocol and consent form. The subjects were recruited by advertising with local churches and pastoral care departments from the local community. For eligibility, the subjects were permitted to have participated in prior spiritual retreats, but could not have participated previously in an Ignatian-based retreat for one week or longer. All subjects underwent an extensive screening that consisted of their medical and psychiatric history, to ensure that there were no contraindications or risks from the MRI; none of the study subjects had a current disorder, such as stroke, tumor, active cardiac disease, or an Axis I psychiatric disorder that might affect cerebral physiology.
All subjects who participated in this study met the following inclusion criteria: (1) cognitively able to provide informed consent and willingness to complete this study; (2) agreement to attend the one-week spiritual retreat; (3) willing to undergo the full imaging procedures with no metal in their body; and (4) women of childbearing potential with a negative blood or serum pregnancy test.
Subjects were excluded from this study if they had: (1) any neurological or psychiatric disorders, including drug or alcohol abuse, that could interfere with cerebral physiology; (2) any active medical conditions that could interfere with cerebral physiology; (3) currently taking medication(s) (i.e., antidepressants, antipsychotics, anxiolytics, benzodiazepines, sedatives, anti-seizure medications) that could affect cerebral physiology; (4) unable or unwilling to lie still in the scanner; and (5) history of previous brain surgery or intracranial abnormalities that could complicate the interpretation of the brain scans.
Within one month of entering into the one-week spiritual retreat, all subjects completed an initial, evaluation with resting BOLD fMRI along with a completion of a battery of validated psychological and spiritual questionnaires. Afterward, within one week of completing the retreat, the subjects returned for their post retreat evaluation which repeated the resting BOLD fMRI and questionnaires. It should be noted that two subjects received their post retreat scans at 12 and 14 days due to logistical issues with scheduling the scans.
After inclusion and exclusion criteria were met, a total of 14 subjects (8 males and 6 females) were enrolled in this study. The subjects were of ages 24–76 years old with a mean age of 54 ± 13 years with a mean education level of 18.5 ± 1.7 years. All 14 subjects were Christian (7 Catholics, 5 Protestants, 1 Orthodox/Anglican, and 1 Quaker). Eight subjects reported previous experience with different types of religious or spiritual retreats. However, no subject had undergone an Ignatian retreat. Subjects had a low level of depression as a group, with a mean Beck Depression score of 4.4 ± 6.0 (scores below 13 are considered within normal limits) and a moderate amount of anxiety with a mean Spielberger Trait Anxiety score of 29.3 ± 7.2. We did not control for other variables including measures of religiosity at baseline or prior meditation/retreat experience. However, subjects functioned as their own control and thus we planned to evaluate the general change from baseline for the subjects after the retreat program.

The intended purpose of the one-week Ignatian retreat is to create a time for greater understanding of an individual’s spiritual life and how to incorporate this new understanding into their everyday life. One goal is to evoke a substantial change and/or deepening of one’s spiritual and religious beliefs. All subjects participated in the one-week Ignatian retreat at the Jesuit Center in Wernersville, Pennsylvania. The retreat site is located in a rural area on 240 acres of natural land with beautiful grounds and art. The retreat is performed primarily in silence. On the first day, each retreatant met with a designated retreat director (usually a priest or nun) who would engage in dialogue and provide daily guidance and insights regarding retreat exercises, plan, and direction each retreatant pursued during the retreat. The retreat is based on the Ignatian exercises (Mottola 1964) but does not follow them strictly to allow for responsiveness to each person’s retreat experience. The plan for each day consisted of voluntary participation in morning mass with additional time spent extensively in personal reflection, contemplation, and prayer. Each day, a meeting with the spiritual director was planned; meals were eaten in a common dining area with other retreatants that were typically shared in silence.

Previously, we reported the effect of the retreat on various psychological and spiritual measures, and provided additional background regarding that data so that they might be considered in the context of the functional connectivity results. To summarize briefly, at the time of undergoing the fMRI scans, each participant completed a series of psychological inventories and measures of spirituality. These surveys have been validated originally in large populations and have been used in both clinical and research settings extensively. The battery of psychological and spiritual measures included the following: the Spielberger State Trait Anxiety Inventory (STAI-Y) is a 20 item questionnaire with a four item response to assess symptoms of anxiety (Spielberger et al. 1983); the Profile of Moods States (POMS) is a 37 item questionnaire with a five item response to assess a variety of symptoms associated with tension, anger, vigor, fatigue, depression, and confusion (McNair et al. 1971); the Beck Depression Inventory (BDI) is a 21 item questionnaire with four response items to assess symptoms associated with depression (Beck and Beck 1972); the 12-Item Short Form Health Survey (SF-12) which asks questions associated with general health and well-being (Ware et al. 1996); the Cloninger Self-Transcendence Scale which has 26 questions rated on a 5-point Likert scale (Garcia-Romeu 2010); and the Brief Multidimensional Measure of Religiousness/Spirituality which is a 38 item scale evaluating 11 dimensions of religiousness and spirituality (Fetzer Institute 1999).
The MR imaging was performed on a 3T Philips Achieva scanner using a standard 8 channel head coil. Structural MRI brain images were collected using a T1-weighted Magnetization-Prepared Rapid Gradient Echo (MPRAGE) sequence for anatomical localization. The imaging parameters used were: field of view (FOV) = 25.6 cm, voxel size = 1.0 × 1.0 × 1.0 mm3, matrix size = 256 × 240, the repletion time (TR) = 6.44 s, and echo time (TE) = 3.16 s, slice thickness = 1 mm, number of slices = 170, flip angle = 8° and acquisition time = 280 s. After this structural scan, resting-state functional MRI (rs-fMRI) data were collected using an Echo Planar Imaging (EPI) sequence using the following parameters: FOV = 25.6 cm, voxel size = 2 × 2 × 4 mm3, matrix size = 128 × 128, TR = 2.5 s, TE = 35 ms, slice thickness = 4 mm, number of slices = 34, number of volumes = 120 and acquisition time = 300 s. During the rs-fMRI scan, all subjects were instructed to close their eyes, keep their head still, and relax quietly for approximately 5–6 min.

In order to process the resting-state BOLD scans, it is important to separate the target low frequency components from physiological noise. The following processing and analysis was performed for the acquired functional volumes in order to uniquely describe the communication between resting-state networks without the effect of noise contaminants. This analysis pipeline is well-established in our institution and widely used in the fMRI community for evaluating rs-fMRI scan data. All resting-state data were spatially preprocessed using SPM12 (Wellcome Department of Cognitive Neurology, University College London, UK) in the Matlab environment (Mathworks, Inc.). Realignment was initially performed to ensure proper voxel to voxel correspondence within the BOLD time series. BOLD is used to differentiates changes in cerebral blood flow (CBF) in fMRI scans and to assess the signal comparison between different structures. The functional volumes from the BOLD fMRI scans were then slice time corrected to account for timing inconsistencies within the EPI data. In order to facilitate the removal (i.e., co-vary out) of confounding temporal factors prior to modeling, scans are segmented into gray matter, white matter, and CSF. Spatial normalization was then performed for each data set and warped to the Montreal Neurological Institute coordinate space through a subject specific deformation field and smoothed with a three dimensional Gaussian kernel with a full width at half maximum (FWHM) of 4 × 4 × 8 mm3. This spatial processing optimizes the data for additional temporal corrections to emphasize the low-frequency resting-state networks of interest for connectivity analysis. The Conn toolbox was integrated into the Matlab environment for component-based noise correction (CompCor) of physiologic and other noise sources such as heart rate or respiratory rate inherent to BOLD imaging.
The preprocessed functional volumes from the prior step were then imported into the Conn toolbox for the resting-state analysis. Structural volumes were separated into white matter, gray matter, and CSF confounds. White matter and CSF confounds were placed in a three-dimensional space and a band-pass filter of 0.008 to 0.09 was applied to restrict analysis to a limited frequency window. For the primary analysis, seed regions of interest (ROI) were used to evaluate specific structures in the frontal, temporal, and parietal lobes, as well as the cerebellum, limbic areas, and cingulate cortex. Changes in functional connectivity between the pre and post retreat scans were analyzed and regions with significant changes reported, corrected using the False Discovery Rate (FDR) method to mitigate against false positives due to multiple comparisons.

The study was conducted according to the guidelines of the Declaration of Helsinki, and approved by the Institutional Review Board of Thomas Jefferson University (protocol 11G.488 originally approved on 01/05/12).

Data can be made available upon reasonable request. 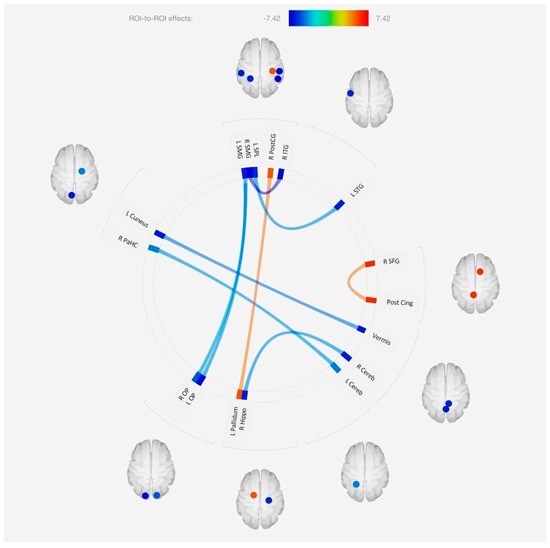 Table 1. Results from rsBOLD analysis.
Table 1. Results from rsBOLD analysis.
© 2020 by the authors. Licensee MDPI, Basel, Switzerland. This article is an open access article distributed under the terms and conditions of the Creative Commons Attribution (CC BY) license (http://creativecommons.org/licenses/by/4.0/).
We use cookies on our website to ensure you get the best experience. Read more about our cookies here.
Accept
We have just recently launched a new version of our website. Help us to further improve by taking part in this short 5 minute survey here. here.
Never show this again