A Case of Geluk Growth: The Career of Scholar and Yogin Shar Kalden Gyatso (1607–1677) and His Role in Propagating the Geluk School in Rebgong, Amdo
Previous Article in Journal

“Militant Piety” in 21st-Century Orthodox Christianity: Return to Classical Traditions or Formation of a New Theology of War?

The article focuses on the reclaiming of militaristic ideas and the emergence of specific “militant piety” and “theology of war” in the Orthodox discourse of post-Soviet Russia. It scrutinizes the increasing prestige of soldiering in the Church and its convergence with the army. This convergence generates particular hybrid forms, in which Church rituals and symbols interact with military ones, leading to a “symbolic reception of war” in Orthodoxy. The authors show that militaristic ideas are getting influence not only in the post-Soviet but also in American Orthodoxy; they consider this parallel as evidence that the process is caused not only by the political context—the revival of neo-imperial ideas in Russia and the increasing role of power structures in public administration—but is conditioned by socio-cultural attitudes inherent in Orthodox tradition, forming a type of militant religiosity called “militant piety”. This piety is not a matter of fundamentalism only; it represents the essential layer of religious consciousness in Orthodoxy reflected in modern Church theology, rhetoric, and aesthetics. The authors analyze war rhetoric while applying approaches of Karen Armstrong, Mark Juergensmeyer, R. Scott Appleby, and other theoreticians of the relationship between religion and violence. View Full-Text
Keywords: Orthodoxy; Russian Orthodox Church; militant piety; theology of war; militarization; ecclesiastical culture; Church militant Orthodoxy; Russian Orthodox Church; militant piety; theology of war; militarization; ecclesiastical culture; Church militant
►▼ Show Figures 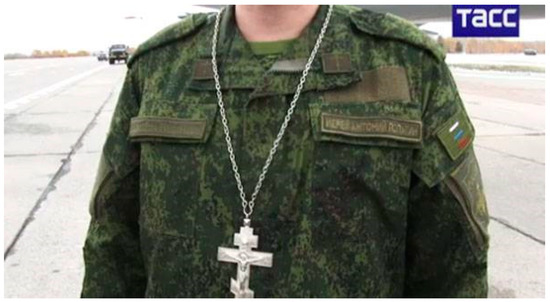 Knorre, B.; Zygmont, A. “Militant Piety” in 21st-Century Orthodox Christianity: Return to Classical Traditions or Formation of a New Theology of War? Religions 2020, 11, 2.


Knorre B, Zygmont A. “Militant Piety” in 21st-Century Orthodox Christianity: Return to Classical Traditions or Formation of a New Theology of War? Religions. 2020; 11(1):2.