Modern Christianity, Part of the Cultural Wars. The Challenge of a Visual Culture
Previous Article in Journal

Strangers in the Sacred Grove: The Changing Meanings of Okinawan Utaki

4. Powerspot Pilgrimage, Tourism, and the Question of Ownership

One of the most noteworthy developments in the field of Japanese religion since the early 2000s has been the popularization of sacred sites by mass media, travel companies, and local authorities as “powerspots” (pawāsupotto). This term goes back to the New Age movement in the 1980s, but it was not used commonly until the early 2000s, when so-called “women’s magazines” (joseishi) started promoting them as places with special spiritual power. After Asahi Shimbun (one of Japan’s leading newspapers) picked up on the topic and declared a “powerspot boom” in 2005, the term spread more widely (Suga 2010). Since then, it has been used in numerous popular guidebooks and magazines on “spiritual travel” and “pilgrimage to sacred places” (seichi junrei), as well as by travel agencies and PR organizations. As Caleb Carter has summarized, “coverage of power spots in the mass media and marketing reached a fervor in the latter half of the first decade of the twenty-first century, peaking in 2010. While media attention has declined since then, interest in power spots among the broader public continues down to the present” (Carter 2018, p. 148; Horie 2017).9 This mediatized “powerspot boom” led to a transformation of popular worship practices at Buddhist temples and especially Shinto shrines, and to the emergence of new practices that were not endorsed by the clergy. For instance, all of a sudden visitors to Ise Jingū could be seen hugging the high cedar trees and holding their hands above sacred stones in the precincts of the main shrines, while visitors to Meiji Jingū ignored the shrine’s worship hall altogether, waiting in line for hours to feel the spiritual energy of an Edo-period well located in the shrine garden (Carter 2018; Rots 2017c, p. 224).
In Okinawa, too, tourist offices and publishing houses have been eager to promote certain sites as “powerspots”. There are a number of popular guidebooks that list Okinawa’s best powerspots, provide information on the sort of benefits (riyaku) that can be obtained there—e.g., good health and love relationships (en-musubi)—and practical details on how to get there, and what sort of spiritual products to purchase. For instance, one of them, the Okinawa pawāsupotto arukikata (“Okinawa powerspot guidebook”), is written by a local “spiritual counsellor”—which, as mentioned, is a term widely used these days by spirit mediums and other spiritual entrepreneurs, who prefer it to the more traditional word yuta with its negative connotations. The guidebook lists a number of famous and less-famous places, such as the Yanbaru Forest in the north (“a sacred forest with powerful healing energy”), the Nakijin Gusuku castle ruins (“a World Heritage Site that connects heaven and earth, where a deep ancient energy remains”), the Bise Fukugi Tree Road (“a place of tranquillity and inspiration”), and the Busena Misaki marine park, where “the energy of the goddess stimulates the chakra” (China 2011). Likewise, several mainland Japanese spiritual counsellors have published “powerspot guidebooks”, in which they enthusiastically proclaim that Okinawan sacred sites have a unique and mysterious healing power. These include the famous spiritual trendsetter Ehara Hiroyuki, who has listed Sēfa Utaki and Kudakajima as important “spiritual sanctuaries” (Ehara 2006; Gaitanidis 2012), and the couple Mano Kyō and Noma Osamu, who have made an Okinawan powerspot guidebook in manga format (Mano to Noma 2011).
Similarly, there is a considerable number of websites on which certain places are advertised as powerspots.10 One popular destination for powerspot tourism is Kudakajima Island: the “Island of the Gods”, home to Kubō Utaki, which has gained fame because it is one of the few places where noro continue to conduct ritual ceremonies on a regular basis (Higa 2000). Others include Hamahiga Island, where the tomb of the ancestral goddess Amamikyo is located; the Valley of Gangala, an old limestone forest that has been turned into a popular tourist destination; Hedo Misaki, the northernmost cape of the island, and nearby Asumori Utaki; Sēfa Utaki, of course; and even Shuri Castle, Okinawa’s most-visited tourist destination, which was completely rebuilt after the war (Loo 2014), and which has some small reconstructed utaki on its grounds.
Framing sites as “mystical” and “powerful” no doubt attracts a certain type of mainland Japanese tourist. This image fits well with popular imaginations of Okinawan culture as characterized by ancient nature spirituality, a subtropical happy-go-lucky mentality, delicious and healthy cuisine, and exotic performing arts (ēsā dancing, sanshin music, et cetera). Okinawan cultural expressions have gained increasing popularity in mainland Japan in recent years, to the point that media have declared an “Okinawa boom”. There is a certain irony to this appropriation, of course, not least in the light of recent events: while I am writing these sentences, the Japanese government is beginning its landfill work in Henoko Bay, destroying a unique marine environment so that the US military can construct yet another large military base on Okinawa, despite the fact that the vast majority of the Okinawan people are opposed to this (Ryukyu Shimpo 2017). James Fisher has phrased it well:

This appropriative turn is the latest phase in mainland Japan’s problematic relationship with Okinawan culture. The Japanese media has long presented the archipelagic prefecture as a paradisal retreat for mainlanders wearied by their quotidian modern existence: a “lost world” to be rediscovered by sharing its inhabitants’ quaint contentedness, joie de vivre, and coexistence with nature. (…) [This impression] is particularly troubling in light of the material reality in Okinawa, which has long suffered from Japanese exploitation, repression, and neglect. Indeed, Okinawa seems far more like a colony than a prefecture equal with those of the Japanese home islands.
(Fisher 2017)

5. Utaki, Ecology, and the Fight against Invaders

The study of utaki poses researchers with significant methodological challenges. Shinto shrines and Buddhist temples are religious institutions with organizational structures; they are run by priests, have ritual calendars, are frequented by members of the parish (ujiko or danka), and often have their own institutional archives. Utaki have none of these. Thus, one can conduct biological surveys or archaeological excavations, but if one wants to learn more about the cultural or historical significance of the site, there are several difficulties: the lack of reliable historical source materials, the lack of a priestly organization and an official institutional narrative, and, in many cases, the lack of consensus among worshippers concerning a site’s meanings and proper use. But then, arguably, it is precisely this diversity, and the absence of a single organization that “owns” the site, that make utaki fascinating.
As utaki lose their former role as the ritual worship site where village priestesses conduct their traditional ceremonies, they can come to signify a number of different things, depending on who you ask: the abode of the village goddess; a remnant of “ancient Shinto” (ko-shintō), which can supposedly teach us about Japanese religion’s “original shape”; a site of Ryukyuan ancestral rituals, and a place of worship (uganju; ogamu basho) where ritual offerings are made in order to preserve continuity with this ancestral tradition; a “powerspot”, where visitors can feel the energy of the universe, and perhaps experience healing; a UNESCO World Heritage Site of “universal value”, the collective property of all of humanity; a disappointing tourist destination, as “there is nothing to be seen”; a biodiversity hotspot, threatened by invasive species and pollution, possibly subject to protective measures; a dangerous, sacred site, where men should not set foot; a place to gather firewood; or a combination of several of these.
In several respects, Okinawa is the prefecture with the most serious problems in all of Japan. Environmental degradation threatens human and non-human livelihoods. The US military base issue is a cause of continuous anger and anxiety, and the construction of the new base at Henoko only strengthens such feelings. Tourism is a mixed blessing: it provides economic benefits and jobs, but it also leads to environmental problems, the transformation of cultural practices (e.g., ēsā dancing) into commodified tourist spectacle, and, in some cases, the appropriation of Okinawan worship sites by outside visitors. Studying sacred sites may help us understand some of the changes and challenges affecting Okinawan society today, including environmental problems and questions of cultural identity.
Small though it is, Okinawa is home to remarkable cultural, religious, and ecological diversity, and my observations do not necessarily apply to all utaki equally. I have not attempted to present a comprehensive overview of the current situation of all these groves; this would require more research in different parts of the island, and it would be beyond the scope of a single article to do so. Rather, the purpose of this article was to identify three main issues for the study of utaki in contemporary Okinawa: the question of their origins and historical trajectories, and the related problem of lingering social-evolutionist narratives; the popularization of mainland Japanese “powerspot tourism”, and the mixed responses to this trend on the part of Okinawan actors; and the potential status of utaki as “Sacred Natural Sites” with high biodiversity, as well as the challenge of invader species. Ultimately, these all boil down to the question of ownership: who owns the utaki, who gets to tell its story, and who decides on its boundaries? These are pressing issues, which are directly connected to ongoing struggles for political and economic control, nature and heritage conservation, and the formulation of social identities. Sacred sites are contested sites, not least in Okinawa. Arguably, then, more in-depth research on utaki and other Okinawan sacred sites is important for acquiring a better understanding of their ecological value, historical changes, and present-day significance. Such research will also shed light on broader changes in Okinawan society, religion, and the natural environment. 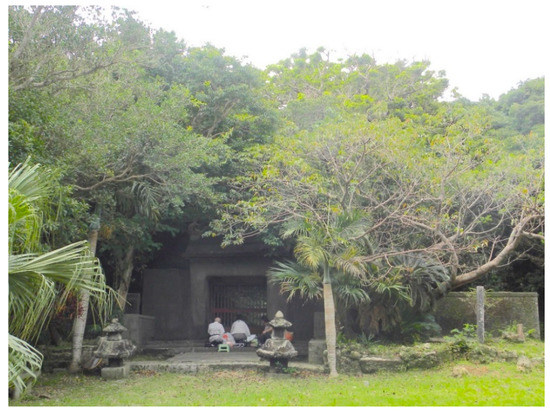 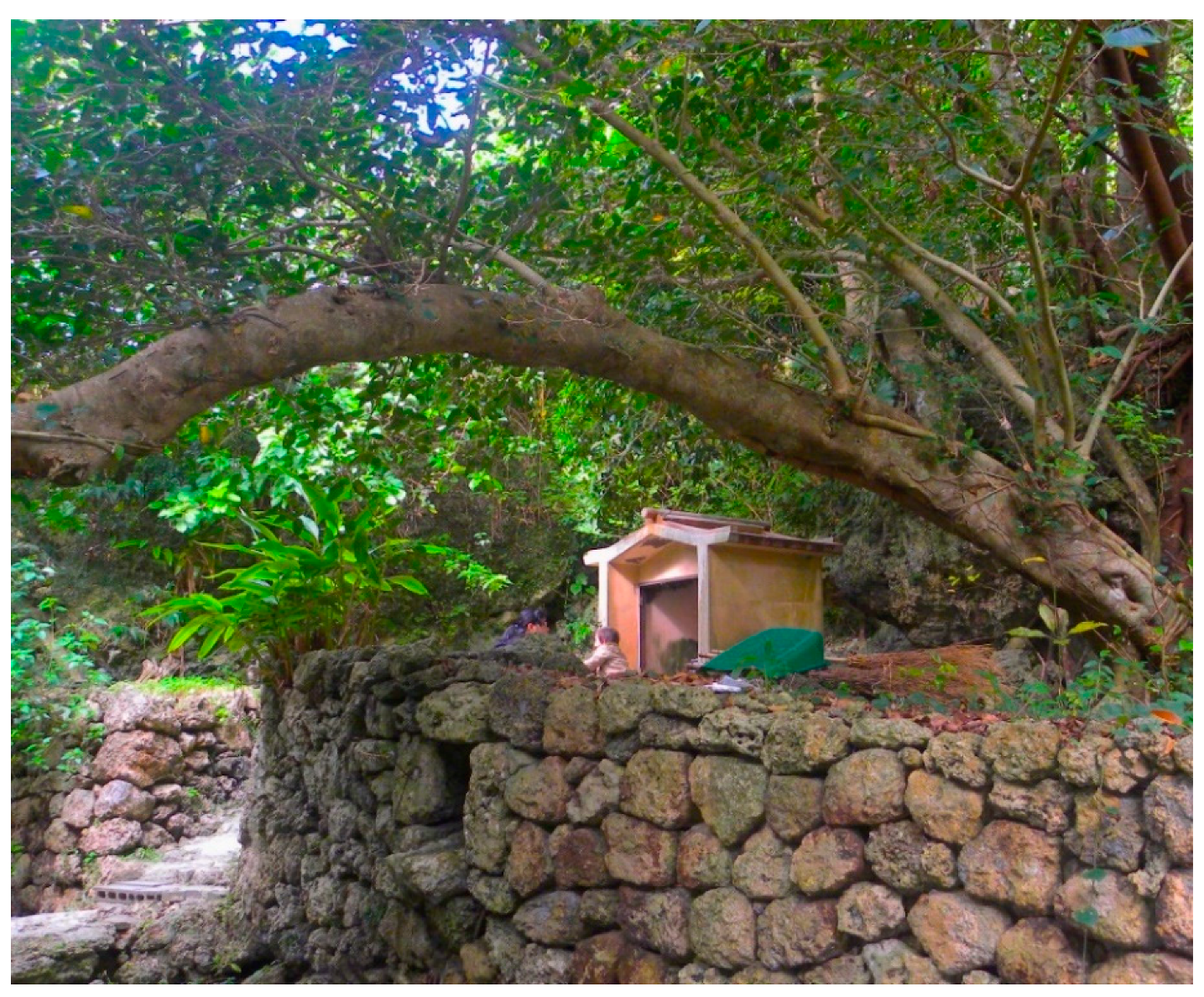 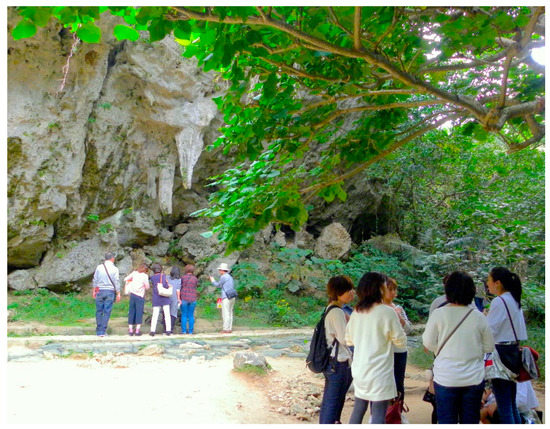