An Understanding of Religious Doing: A Photovoice Study
Next Article in Special Issue

Strangers in the Sacred Grove: The Changing Meanings of Okinawan Utaki
Previous Article in Journal

We Have Come Back Home: The Spanish-Moroccan Community, Collective Memory, and Sacred Spaces in Contemporary Spain

Consistent with the pan-Himalayan tendency to see the landscape as lively and animated, protector deities and local spirits are perceived to inhabit various features of the landscape in Bhutan, causing these places to be treated with reverence and respect. Local spiritual beliefs are prized as central to the cultural identity of the Kingdom, making their way into government planning documents, town planning negotiations, and the 2008 Constitution. This elevation of local spiritual belief has been central to the maintenance and preservation of Bhutanese culture in its encounter with globally hegemonic social, economic, and political norms. Spirits and deities are believed to be the original owners of the land predating the introduction of Buddhism from Tibet. According to terma texts—spiritual treasures hidden by great Buddhist teachers to be discovered later—the initial introduction of Buddhism into Bhutan occurred in the seventh century. At that time, the Tibetan king Songtsen Gampo, the 32nd king of the Yarlung dynasty, built two temples in western and central parts of Bhutan as part of a strategy to pin down a demoness who was ravaging the Himalaya. About a century after the construction of the temples, Padmasambhava, known throughout the Himalayas as Guru Rimpoche, or “Precious Teacher,” arrived in Bhutan, subjugated eight classes of local spirits and made them sworn protectors of the Dharma. In this way, local deities and spirits became incorporated into Bhutan’s Vajrayana Buddhism to the extent that images of them are found at Buddhist temples and monasteries. Vajrayana Buddhism and local deities and spirits twine together in Bhutan to shape a cosmology that recognizes a spectrum of sentient beings, only some of whom are visible. The presence of deities and spirits informs local land use. Deity abodes or “citadels” (Dz.: pho brang) are restricted from human use. The presence of a deity citadel is sufficient in some locales to cause the diversion or reconsideration of human construction and resource use. By grounding spiritual beliefs in specific sites of the landscape, the citadels of deities sanctify the landscape, becoming nodes of resistance and resilience that support the Bhutanese in inhabiting their own internally-consistent cosmology, even as the pressures of global integration seek to impose hegemonic Western norms. View Full-Text
Keywords: Bhutan; sacred natural sites; Buddhism; Vajrayana Buddhism; resilience; sacred place; sense of place; bio-cultural resilience; local deities; traditional ecological knowledge Bhutan; sacred natural sites; Buddhism; Vajrayana Buddhism; resilience; sacred place; sense of place; bio-cultural resilience; local deities; traditional ecological knowledge
►▼ Show Figures 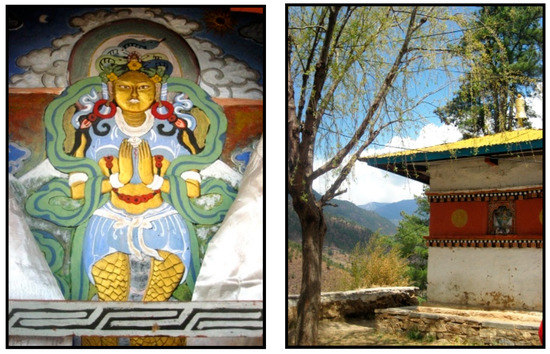