The More You Search, the More You Find: A New Mediterranean Endemism of the Genus Ocenebra Gray, 1847 (Mollusca: Gastropoda: Muricidae) from a Submarine Cave of the Messina Strait Area (Italy)

Mediterranean coasts are affected by multiple mounting pressures. In Cyprus, marine fish farming has grown rapidly in the past decade and is concentrated in the west side of Vasiliko Bay. The east coast of this bay has ports, a power station, a desalination unit, a cement factory, a major new oil terminal, and gas storage facilities. The bay is earmarked to create the largest hydrocarbon processing, storing, and transport facility in the region. Here, we assess the status of Posidonia oceanica habitat in an understudied region at the upper thermal, and eastern limit, of this Mediterranean endemic seagrass. An extensive ancient seagrass meadow was revealed, covering about 200 ha across 10 km of coastline, over soft substrata at ca 10–30 m depth, and over hard substrata at ca 0–6 m depth. Seagrass shoot density and leaf surface area decreased, both with increasing depth and with proximity to industrial developments; part of the meadow had been destroyed by dredging to build a jetty. Close to fish farms the seagrass had higher epiphytic biomass as well as lower leaf number, mass, and surface area, all of which indicate adverse effects of eutrophication and increased turbidity. Despite these multiple stressors, most of the meadow was in good ecological status, with some of the highest shoot densities ever reported. Furthermore, iconic species like sea turtles, monk seals, and dolphins were seen during sampling. Posidonia oceanica meadows off Cyprus are among the most valuable in the Mediterranean due to their tolerance of high seawater temperatures. Managers of future coastal developments in the region will need to adhere to European legislation and international conventions designed to secure the socioeconomic benefits of seagrass beds. View Full-Text
Keywords: Posidonia oceanica; industrialisation; fish farming; dredging; ocean warming; multiple stressors; coastal management Posidonia oceanica; industrialisation; fish farming; dredging; ocean warming; multiple stressors; coastal management
►▼ Show Figures 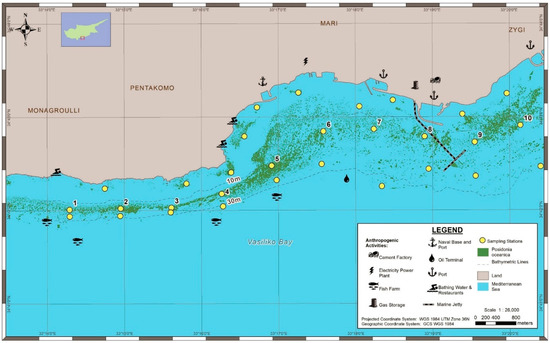