Bivalve aquaculture is an important component of the economy in eastern Canada. Because of current social, environmental, economic, and resource constraints, offshore mussel cultivation seems to be a promising strategy. With the objective of optimizing farming strategies that support the sustainability and development of the mussel industry at a microgeographic scale, we evaluated, after a traditional two year production cycle, the commercial performance of spat from several mussel (Mytilus edulis) stocks originating from sites separated by less than 65 km and cultivated at two different grow-out sites (shallow lagoon and offshore waters). The spatiotemporal variation in spat performance was studied through a multiyear in situ “stock-site” spat transfer design. The spat supply originating from the Bassin du Havre-Aubert lagoon systematically exhibited a larger size at sleeving time when compared to other stocks, and a better productivity level when harvested. Nevertheless, an alternative strategy would be to collect spat from the Havre-aux-Maisons lagoon, mostly because of the important commercial volumes of spat that can be collected there. Commercial performance (net income) was three times higher in the deep offshore grow-out site than in the shallow lagoon site. This better productivity in the open sea confirms the highly valuable strategy of offshore mussel farming in this area, where it was hypothesized that the less stressful environmental conditions positively influence reproduction, survival, and growth trends. View Full-Text
Keywords: Mytilus edulis; spat transfer; stock; site; commercial performance; offshore Mytilus edulis; spat transfer; stock; site; commercial performance; offshore
►▼ Show Figures 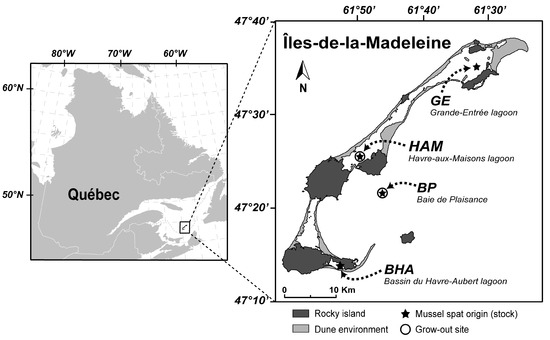