There is an increase in installations of exhaust gas scrubbers on ships following international regulations on sulphur content in marine fuel from 2020. We have conducted emission measurements on a four-stroke marine engine using low sulphur fuel oil (LSFO) and heavy fuel oil (HFO) at different steady state engine loads. For the HFO the exhaust was probed upstream and downstream of an exhaust gas scrubber. While sulphur dioxide was removed with high efficiency in the scrubber, the measurements of particle emissions indicate lower emissions at the use of LSFO than downstream of the scrubber. The scrubber removes between 32% and 43% of the particle mass from the exhaust at the HFO tests upstream and downstream of the scrubber, but levels equivalent to those in LSFO exhaust are not reached. Decreases in the emissions of polycyclic aromatic hydrocarbons (PAH-16) and particulate matter as black carbon, organic carbon and elemental carbon, over the scrubber were observed for a majority of the trials, although emissions at LSFO use were consistently lower at comparable engine power. View Full-Text
Keywords: scrubber; EGCS; emissions; particles; PM; BC; exhaust gases; on board measurements scrubber; EGCS; emissions; particles; PM; BC; exhaust gases; on board measurements
►▼ Show Figures 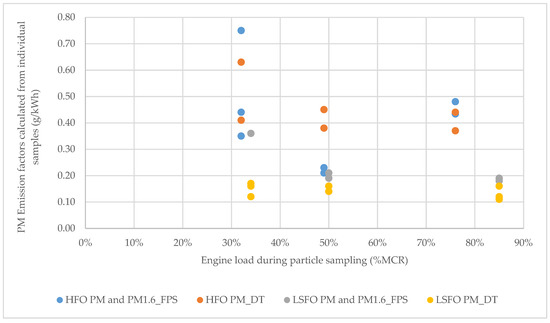