Fish can sense their surrounding environment by their lateral line system (LLS). In order to understand the extent to which information can be derived via LLS and to improve the adaptive ability of autonomous underwater vehicles (AUVs), a novel strategy is presented, which directly uses the information of the flow field to distinguish the object obstacle. The flow fields around different targets are obtained by the numerical method, and the pressure signal on the virtual lateral line is studied based on the chaos theory and fast Fourier transform (FFT). The compounded parametric features, including the chaotic features (CF) and the power spectrum density (PSD), which is named CF-PSD, are used to recognize the kinds of obstacles. During the research of CF, the largest Lyapunov exponent (LLE), saturated correlation dimension (SCD), and Kolmogorov entropy (KE) are taken into account, and PSD features include the number, amplitude, and position of wave crests. A two-step support vector machine (SVM) is built and used to classify the shapes and incidence angles based on the CF-PSD. It is demonstrated that the flow fields around triangular and square targets are chaotic systems, and the new findings indicate that the object obstacle can be recognized directly based on the information of the flow field, and the consideration of a parametric feature extraction method (CF-PSD) results in considerably higher classification success.
Keywords: object obstacle recognition; chaotic theory; flow sensing; underwater robot; SVM object obstacle recognition; chaotic theory; flow sensing; underwater robot; SVM
►▼ Show Figures 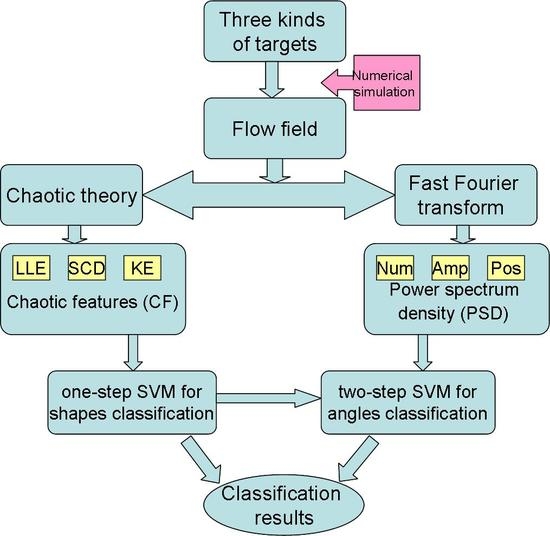