The Wave Energy Converter Design Process: Methods Applied in Industry and Shortcomings of Current Practices
Next Article in Special Issue

Numerical Analysis of the Rudder–Propeller Interaction
Previous Article in Journal

The full scale 1200 TEU container ship, which is designed with an accommodation located at the aft, has been used as the reference model for computation. The principal particulars of the ship are given in Table 1, and Figure 1 shows the designed hull form of the original model.

In this research, all steps for the designed simulation domain, meshing and setting of the boundary conditions have been done as per the user guide published by the International Towing Tank Conference (ITTC) manual for using CFD, [22,23,24,25,26] and our previous publications [12,13,14]. In this study, the computational domain has been designed with 6.5 L, 2.2 L and 0.75 L instead of 1200 m length, 450 m breadth and 150 m height. Mesh of the computed domain has been used as unstructured mesh with a triple prism layer and y+ has been taken to be less than 5. The popular turbulent viscous model k-ε for unsteady flow has been used. The velocity inlet is given at the inlet as the wind velocity, the pressure outlet is given at the outlet of the computed domain. The bottom, top and sides are given at the walls. To meet realistic case pressure, the outlet makes the open air condition possible, the limited dimension of the computed domain must be designed to be large enough. However, the dimensions of the computed domain has an effect on the mesh number and also an effect on running time. If the top and side of the domain is far enough, the effects on the CFD result become small. Therefore, we must design an appropriate domain and boundary condition. In computation, the time size step is of 0.005 s and 6000 time steps. All cases have been done by an Intel Xeon Gold 6138 2.0 GHz computer, with 3.7 GHz Turbo, 20 C with 64 GB of RAM. Figure 2 shows computed domain and mesh used for simulation.

2.3. Covegence of Mesh Using for Computation

3. Interaction Effect between Hull and Accommodation

4.1. Proposed Accommodation Shape for the Ship

The original container ship has been designed with an accommodation located at the aft of the ship. In this section, three new hull forms with an accommodation located at the frontal part of ship have been proposed. Three models with frontal accommodation, named N1, N2 and N3, have been used for computation to determine the interaction effect on aerodynamic performances of the proposed streamlined hull shapes. The dimensions of the models are the same ones as those of the original ship shown in Table 1. The computation for all ships have also been done under the same conditions as shown in the Section 2. Figure 5 shows the proposed new models N1, N2 and N3.
In the proposed models, the N1 has the same accommodation shape of the original ship but is located at frontal hull, the N2 has a streamlined bow cover, and the N3 has a streamlined accommodation shape and it is located at frontal hull. Computation has been done for all the models under the same conditions to investigate the aerodynamic performances of the ships.

4.3. Interaction Effect between Hull and Accommodation on Wind Drag

In this paper, aerodynamic performances of a container ship in head wind have been simulated by CFD. From the obtained results, the interaction effect between hull and accommodation has been investigated. Furthermore, the obtained results in this paper have shown that the newly proposed frontal accommodation shapes can be used to considerably reduce wind drag acting on the container ships, leading to more economic fuel consumption in marine transportation. The main conclusions are summarized as follows:

This research is funded by Vietnam National Foundation for Science and Technology Development (NAFOSTED) under the grant number 107.03-2019.302. The authors would like to warmly express their thanks for the support. 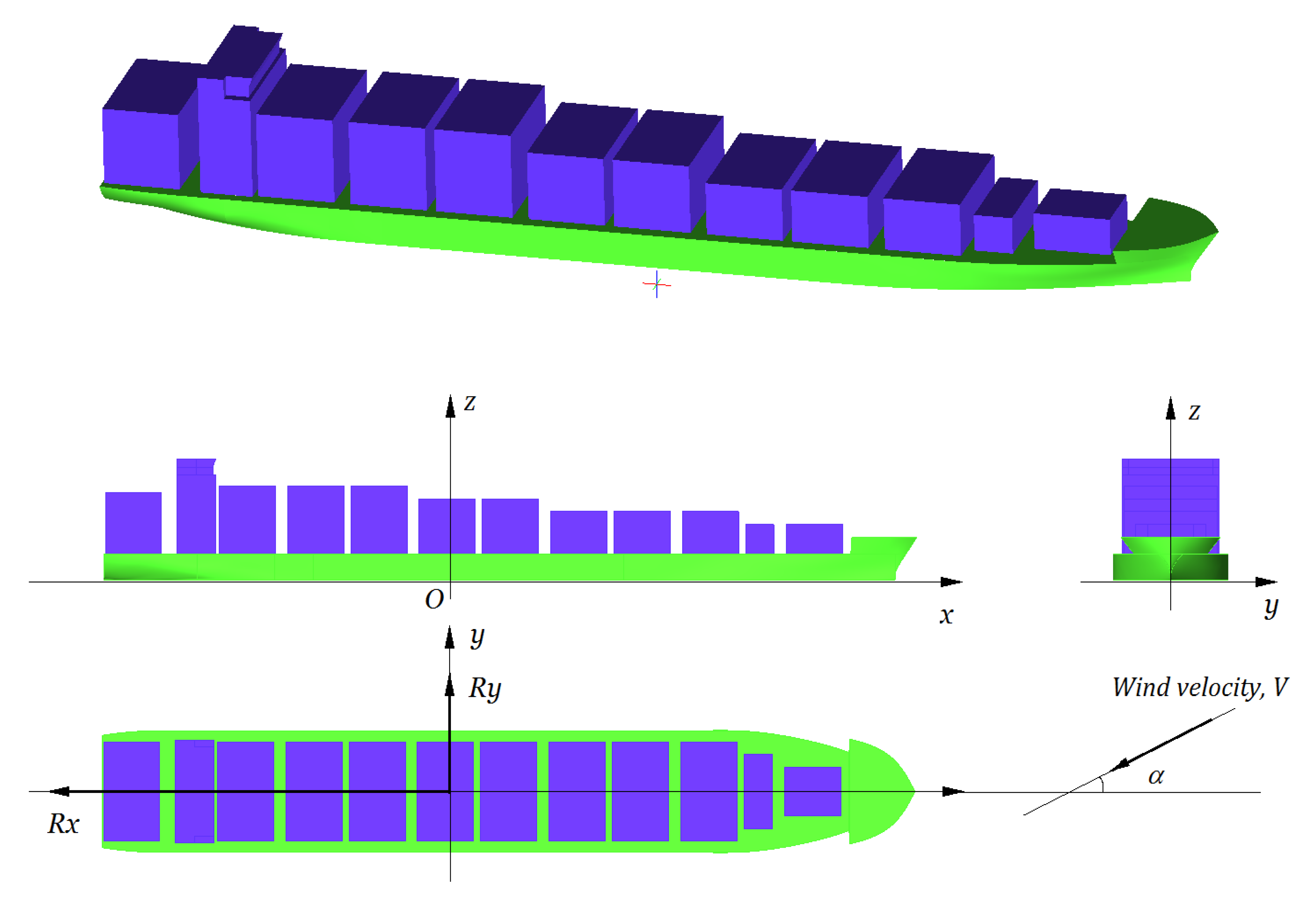 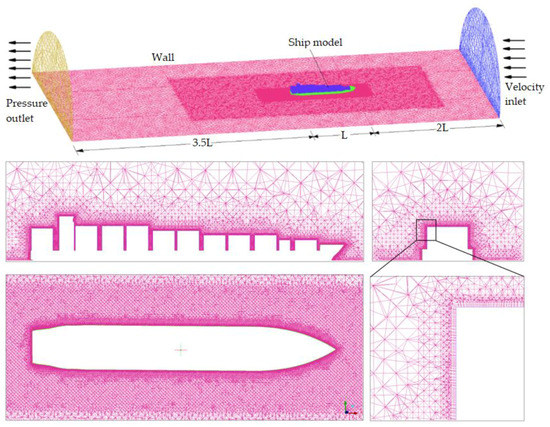 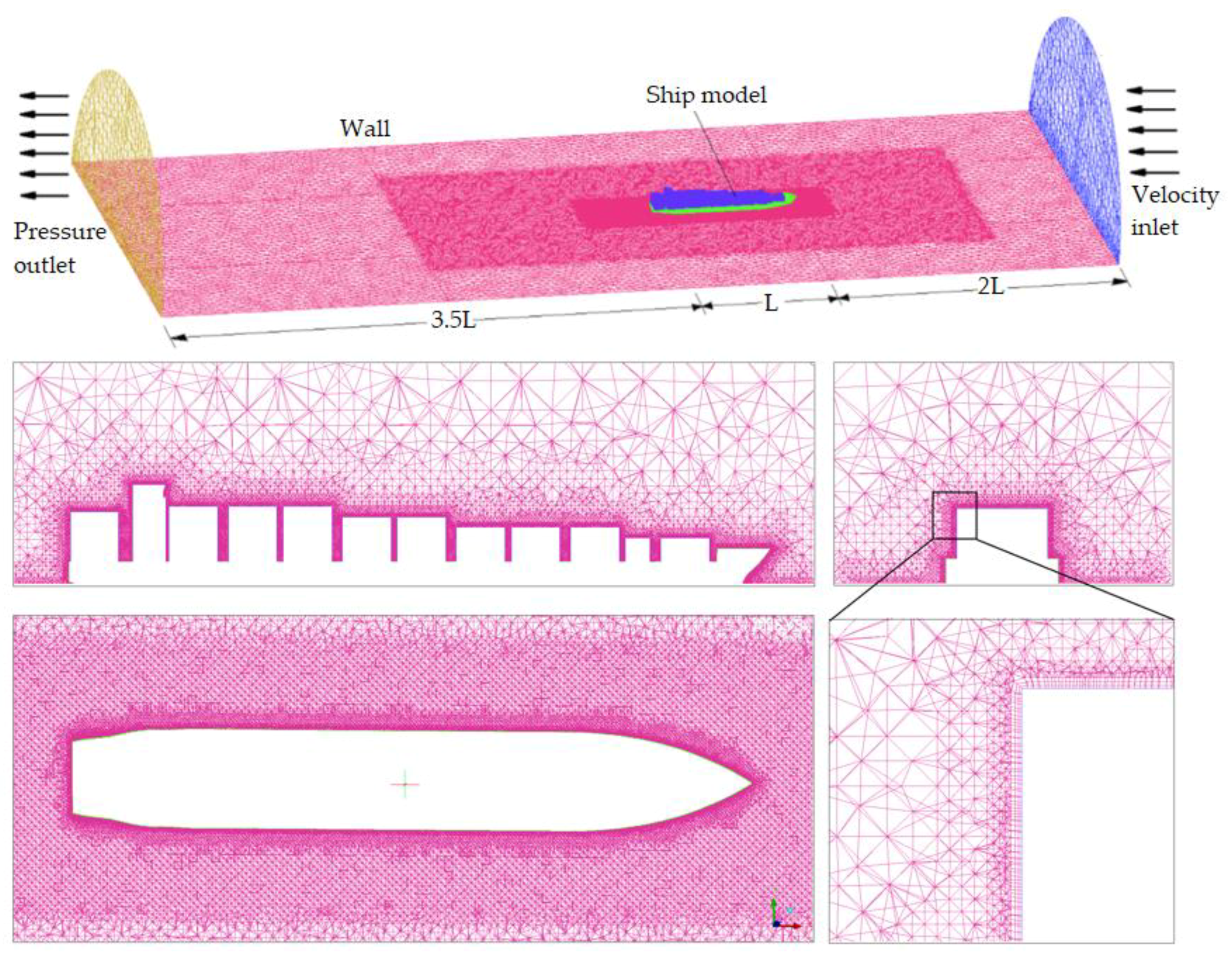 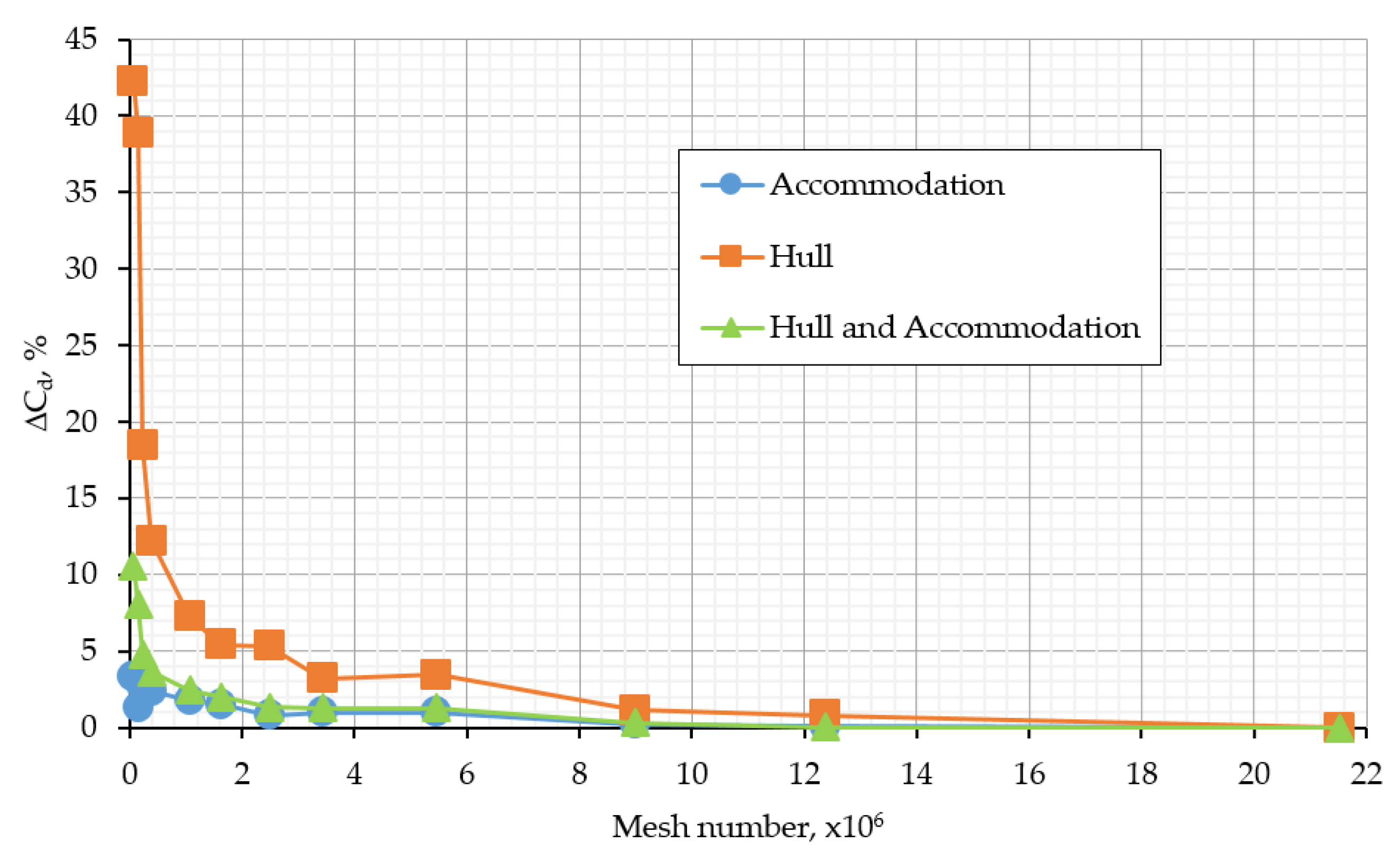 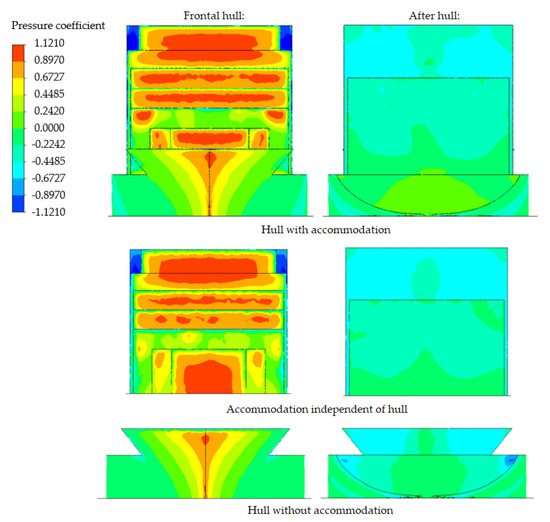 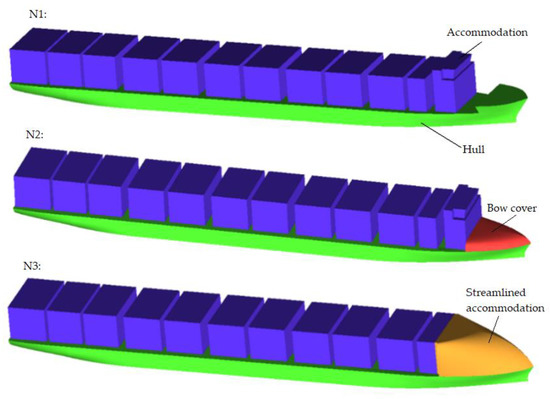 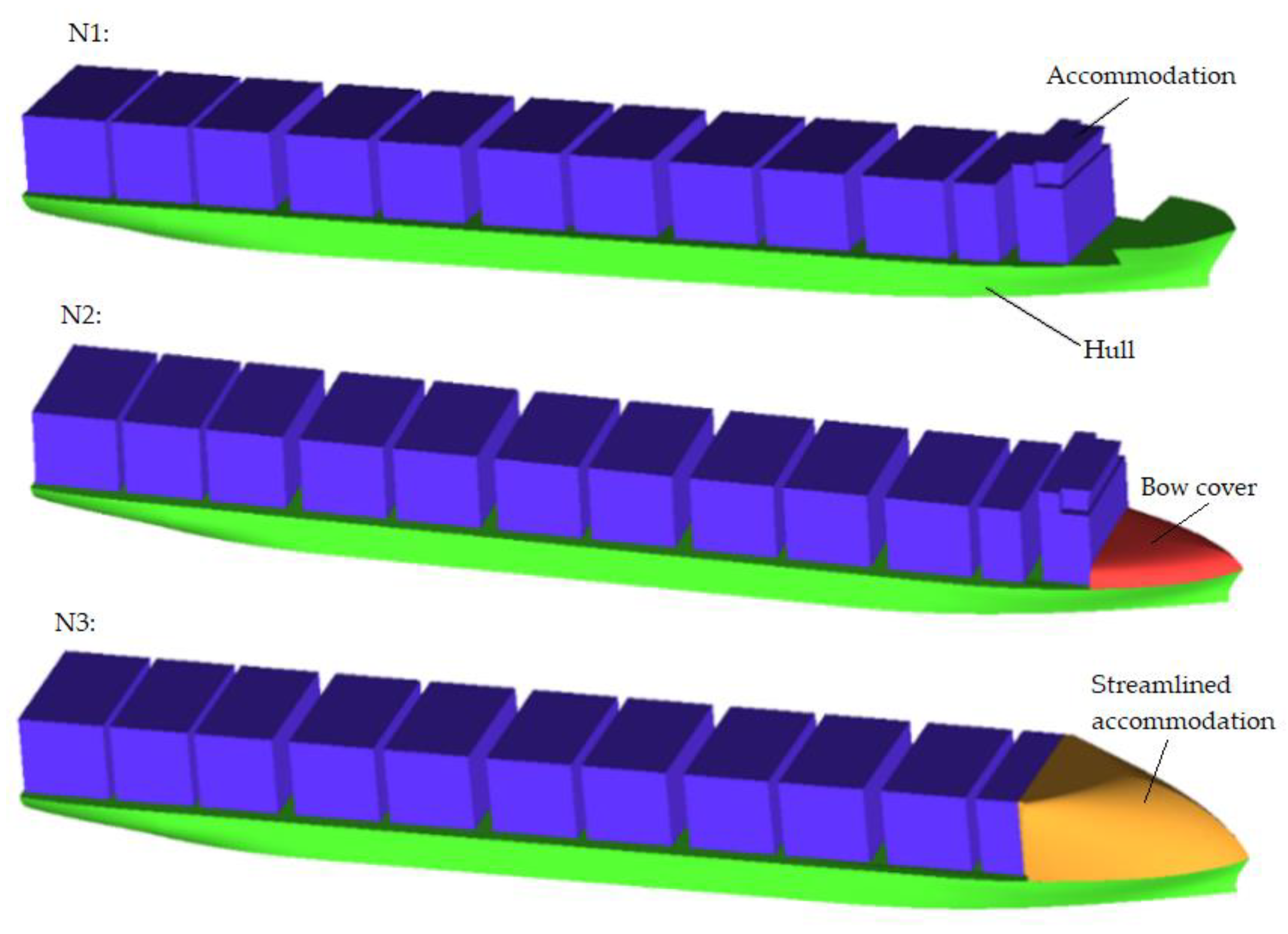 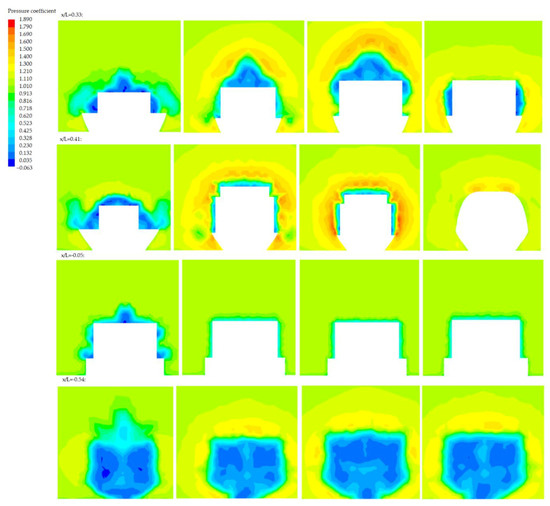 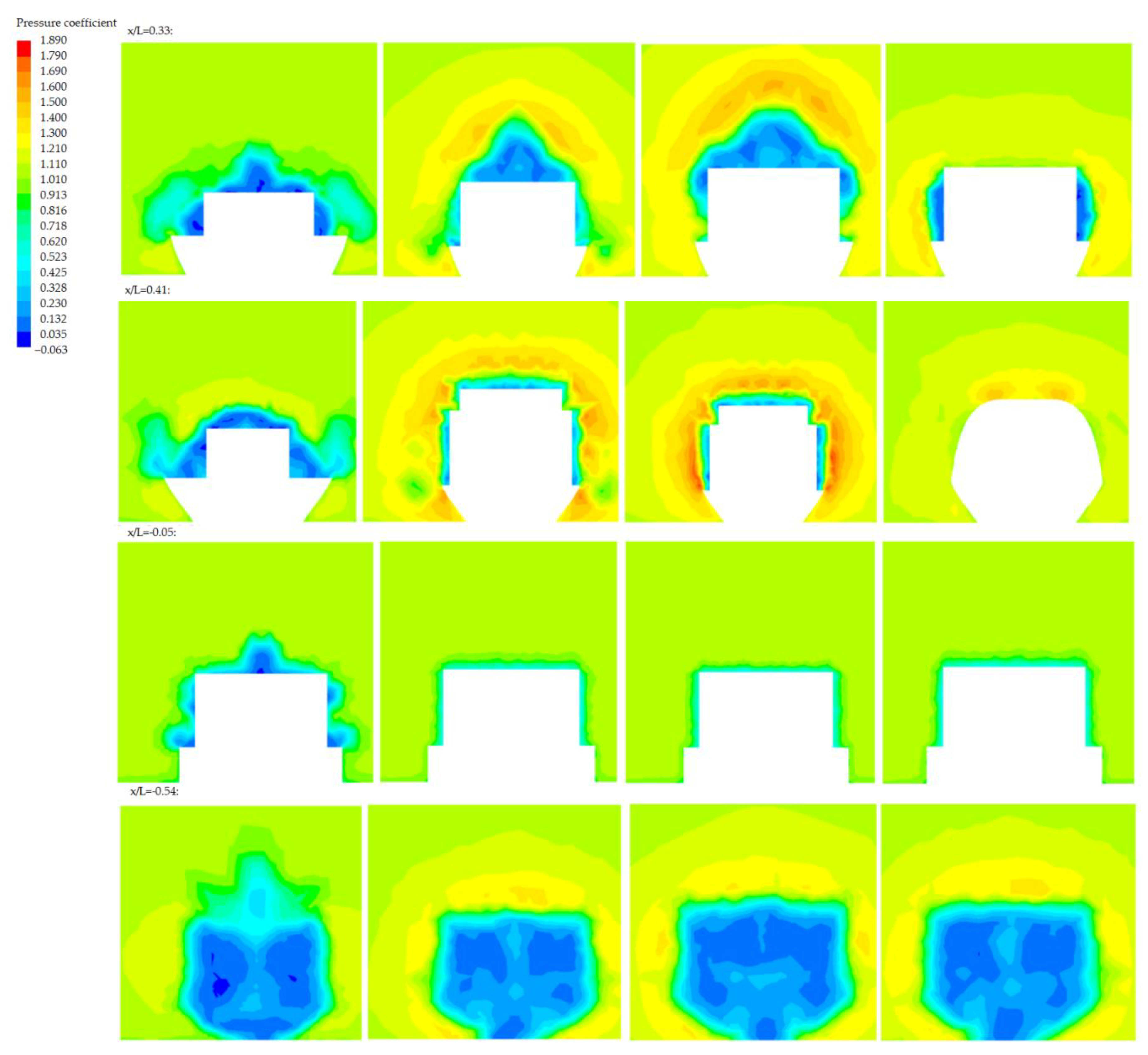 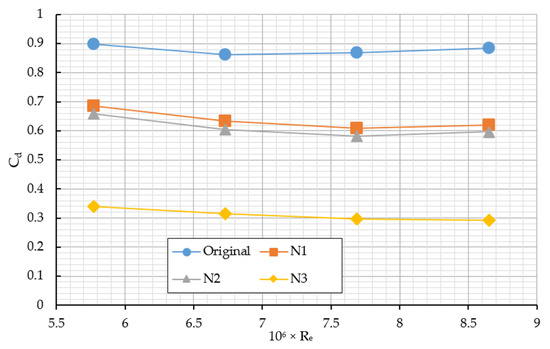 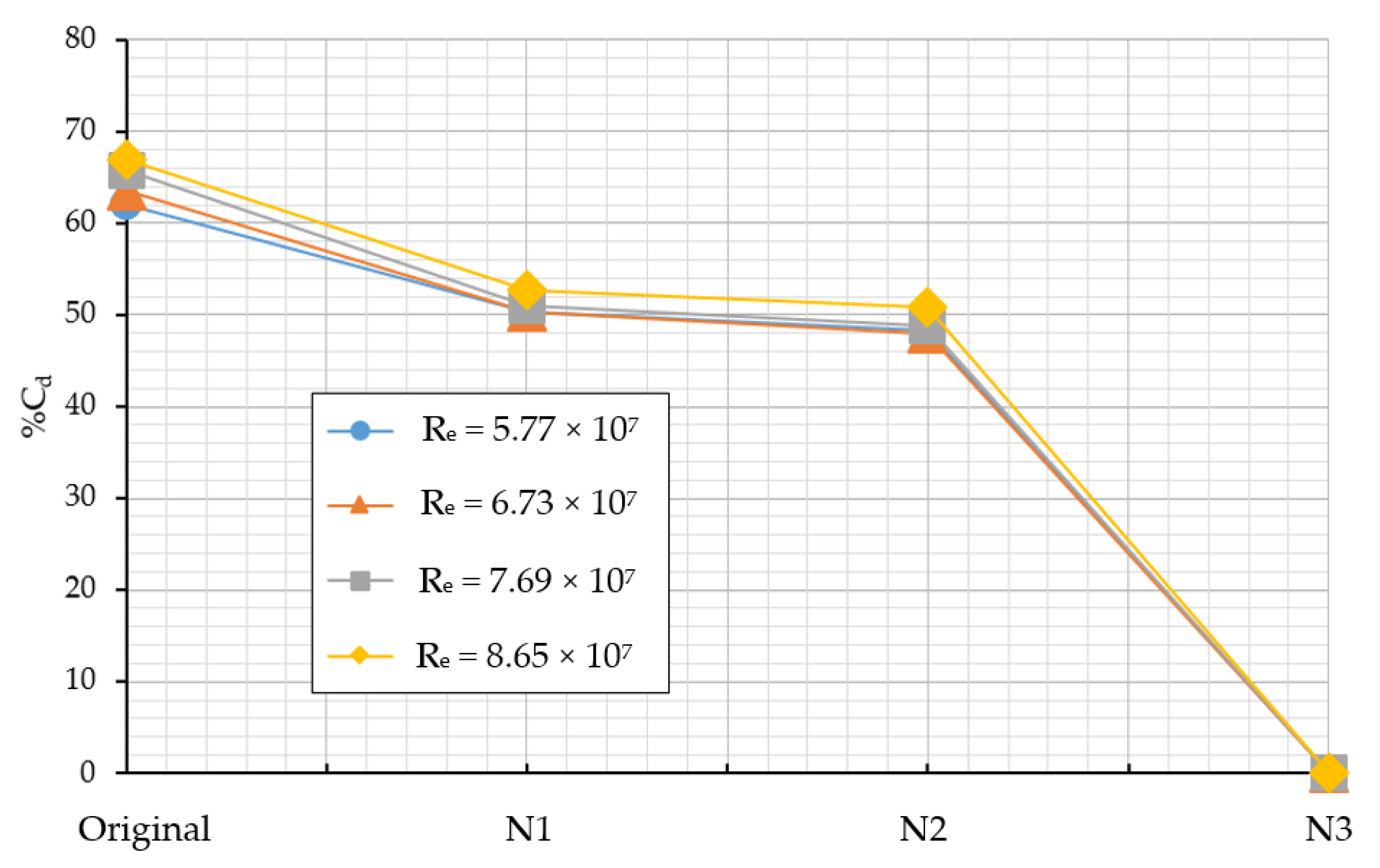 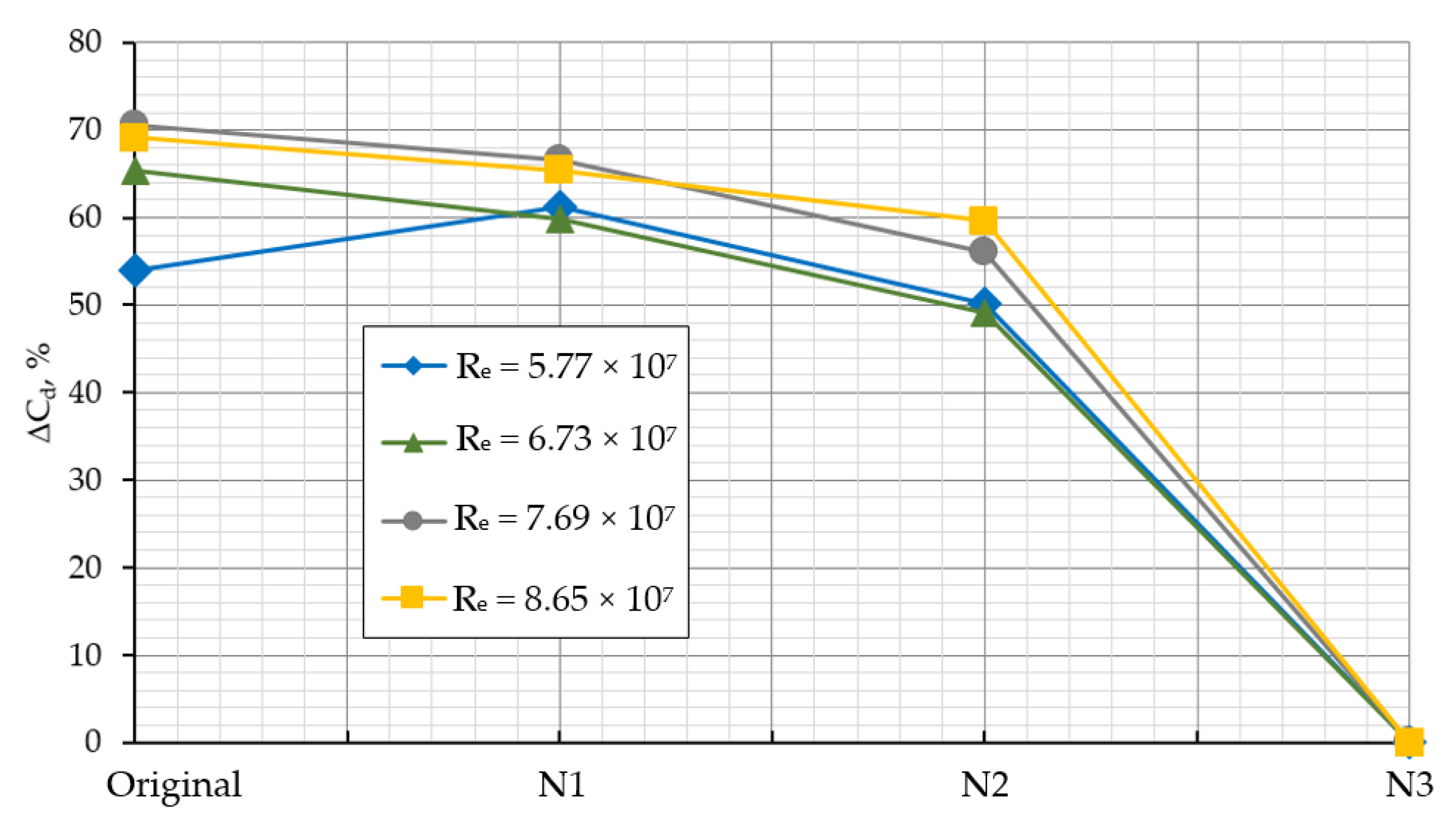