Globally, coral reefs are under threat from climate change and increasingly frequent bleaching events. However, corals in Kāneʻohe Bay, Hawaiʻi have demonstrated the ability to acclimatize and resist increasing temperatures. Benthic cover (i.e., coral, algae, other) was compared over an 18 year period (2000 vs. 2018) to estimate species composition changes. Despite a climate change induced 0.96 °C temperature increase and two major bleaching events within the 18-year period, the fringing reef saw no significant change in total coral cover (%) or relative coral species composition in the two dominant reef-building corals, Porites compressa and Montipora capitata. However, the loss of two coral species (Pocillopora meandrina and Porites lobata) and the addition of one new coral species (Leptastrea purpurea) between surveys indicates that while the fringing reef remains intact, a shift in species composition has occurred. While total non-coral substrate cover (%) increased from 2000 to 2018, two species of algae (Gracilaria salicornia and Kappaphycus alvarezii) present in the original survey were absent in 2018. The previously dominant algae Dictyosphaeria spp. significantly decreased in percent cover between surveys. The survival of the studied fringing reef indicates resilience and suggests these Hawaiian corals are capable of acclimatization to climate change and bleaching events. View Full-Text
Keywords: coral reefs; macroalgae; resilience; species composition coral reefs; macroalgae; resilience; species composition
►▼ Show Figures 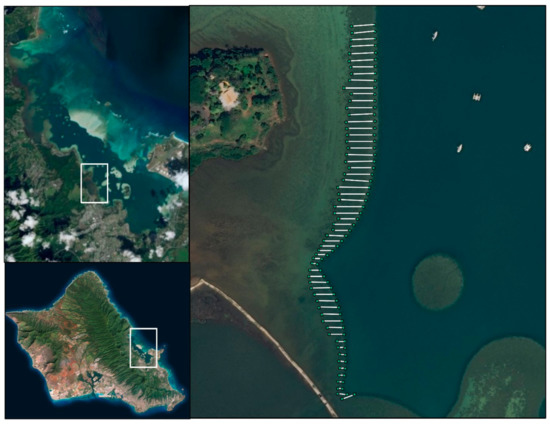