The development of marine wireless optical communications is of great significance in remote submersibles, submarines, analysis of marine resources, and exploration of undersea gas and oil. Therefore, the construction of an underwater high-speed, secure and high-capacity optical communication system is important. Because the use of vortex modes can achieve secure optical communication with high information content [1], research on the propagation of the vortex mode in turbulent media has gotten ferocious attention in the field of wireless optical communication [1,2,3,4]. However, when the vortex wave transits through turbulent seawater, it will suffer attenuation and wavefront distortion due to the various absorbing substance and the fluctuations of refractive index [5]. Considering that the vortex mode is determined by the wavefront structure, the wavefront deformation will generate mode distortion. It is noted that the wavefront deformation also includes phase distortion caused by optical systems [6], and “branch point” [7] contributed by the turbulent channel can also cause mode distortion. It is distortion of vortex mode that causes vortex crosstalk and vortex noise, which will reduce the quality of a wireless optical communication system with vortex modes. For this reason, a large number of studies have been reported about the propagation of vortex mode in turbulence of seawater [8,9,10,11,12,13,14]. For instance, Huang et al. [8] studied the evolution of Gaussian Schell model vortex beam in seawater turbulence. Liu et al. [9] analyzed the propagation of partially coherent flat-topped hollow beam carrying vortex mode in seawater turbulence. Zhao et al. [10] researched the evolution of four-fold vortex mode of green light (520 nm) in underwater channels of 2 m by experiments. Liu et al. [11] investigated the evolution of partially coherent four-petal Gaussian beam with vortex modes in seawater turbulence and found that when either decreasing the coherence length, the relative strength of the temperature and salinity fluctuations or the dissipation rate of kinetic energy per unit mass of fluid, or increasing the dissipation rate of the mean square temperature, the beam will soon be converted into a Gauss-like beam. Xu and Zhao [12] studied the propagation of a stochastic electromagnetic vortex beam in the turbulence of seawater, and found that a smaller topological charge corresponds to a smaller spectral degree of polarization.
Besides, a localized wave is one that has no diffraction for a long distance in the absence of turbulence [15]. For this reason, Ciattoni et al. [16] researched the transiting of vector electromagnetic localized wave in the absence of turbulence, and Ornigotti et al. [17] explored the propagation law of a new class of non-diffracting optical pulses with vortex mode. Recently, we investigated the received probability of vortex mode carried by an X wave in the turbulence of oceans. However, because the effect of frequency distribution is ignored in the calculation of the phase structure function [18], and the received probability function is a multiple integral, it is difficult to use this model to analyze problems such as bit error rate, channel capacity and so on. Therefore, by the Gaussian spectrum of the frequency of pulse, we superimpose the monochromatic Bessel–Gaussian beams to constitute the localized wave of Bessel–Gaussian amplitude envelope (BGLW) carrying vortex modes, and establish a new received probability of vortex modes that can be used to analyze signal bit error rate and the channel capacity of the communication link.
In this paper, for the BGLW with vortex modes in anisotropic seawater turbulence, we present a spectrum average mutual coherence function (SAMCF) by introducing a spectrum average coherence length of spherical wave. Using this SAMCF, we set up a more concise model of received probability of vortex modes carried by the BGLW in anisotropic seawater turbulence. With the help of the probability model, we discuss the influence of beam parameters, turbulence and receiver aperture on the received probability of vortex modes of the BGLW in weak seawater turbulence.

In order to make the conclusions of this study closer to the real seawater environment, we research the propagation of BGLW with vortex modes in anisotropic turbulence. For the anisotropy of turbulent seawater that exists only along the z direction of propagation, we have the power spectrum of the refractive index fluctuations [13] where is the spatial frequency of the refractive index fluctuations, , under the Markov approximation, can be further simplified as , is the turbulence anisotropy index; is the ratio of temperature and salinity contributions to the refractive index spectrum, which can vary in in the seawater with and 0 being heavily temperature and salinity dominating respectively, is the dissipation rate of kinetic energy per unit mass of fluid that ranges from to , is the dissipation rate of the mean-squared temperature and has the range from to ; , is the inner scale, is the “temperature structure” constant and denotes the temperature fluctuation strength of seawater turbulence for given [19], , , , and .
Using the Rytov approximation, we can express the complex amplitude of a Bessel Gaussian (BG) monochromatic vortex wave in turbulent seawater at the receiver plane as [20] where means cylindrical coordinates, is the angular frequency of the beam, represents the phase perturbation of spectrum arising from seawater turbulence, denotes the complex amplitude of the BG monochromatic vortex wave in the absence of turbulence and is expressed as [18,21] where is the beam waist, represents the modified Bessel function of the first kind, is the topological charge number of vortex mode, is the Bessel cone angle, is a constant, is the non-dimensional coordinate. In Equation (3), we have changed the Bessel function of the first kind in [18,21] to modified Bessel function of the first kind, through the following transformation [22] Applying the localized wave theory [17,23] and using the frequency spectrum of the Gaussian pulse, we can express the localized wave of Bessel–Gaussian amplitude envelope (BGLW) transiting in turbulent seawater as where represents the half-modulated pulse width of the input pulse and is center frequency.
Introducing new variables: the sum frequency and the difference frequency , in the case of narrowband, we have the approximate: , where represents average frequency, meanwhile, relates to the location of the center frequency [24]. That is to say
For the Gaussian spectrum of the frequency of pulse, we have

To obtain the received probability distribution of vortex modes for the BGLW, now we structure the spectrum average mutual coherence function (SAMCF) of BGLW in turbulent seawater. The SAMCF of output BGLW can be given by following expression [20,23,25] where is the ensemble average of seawater turbulence, represents the two-frequency mutual coherence function (TFMCF) of BG vortex wave in seawater turbulence and should be written as where is the TFMCF of BG vortex wave without turbulence interference.

By Equation (3), the approximation: , the paraxial approximate and the approximate relationship: , , and by ignoring the turbulence effects, we can express the TFMCF of BG vortex beam as [13,18] where the marrow-band approximate: has been applied.
Combined with Equations (8), (9), (13) and (14), the SAMCF of output BGLW can be written as [13,18] where , denotes parabolic cylinder function, and means taking the double factorial of N.

In order to explore the use of vortex modes to improve the channel capacity of information transmitted by underwater optical communication system, we focus on the transiting of vortex modes carried by the BGLW in turbulent seawater. In this paper, we derive the spectrum average coherence length of spherical wave, the SAMCF of BGLW, and establish the received probability of vortex modes. Our paper indicates that BGLW is a kind of vortex beam which is more promising than other vortex waves to improve transmission of vortex modes. For the given receiver aperture and turbulence parameters, we can utilize larger half-modulated pulse width, smaller Bessel diffraction angle and the maximum effective beam waist to improve the transmission performance of vortex modes. Our paper indicates that we can utilize the BGLW with vortex mode as a communication carrier to increase the amount of communication data transmission in the system of remote submersibles, submarines, analysis of marine resources, and exploration of undersea gas and oil. 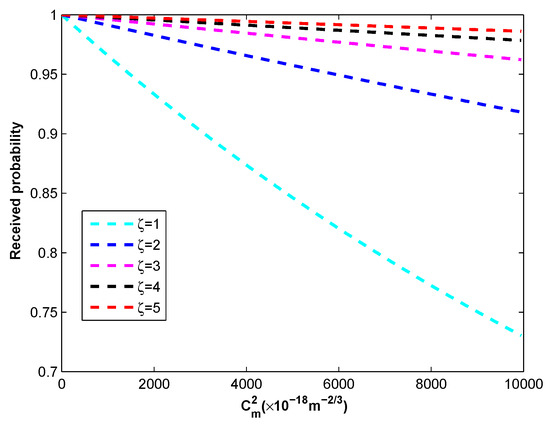 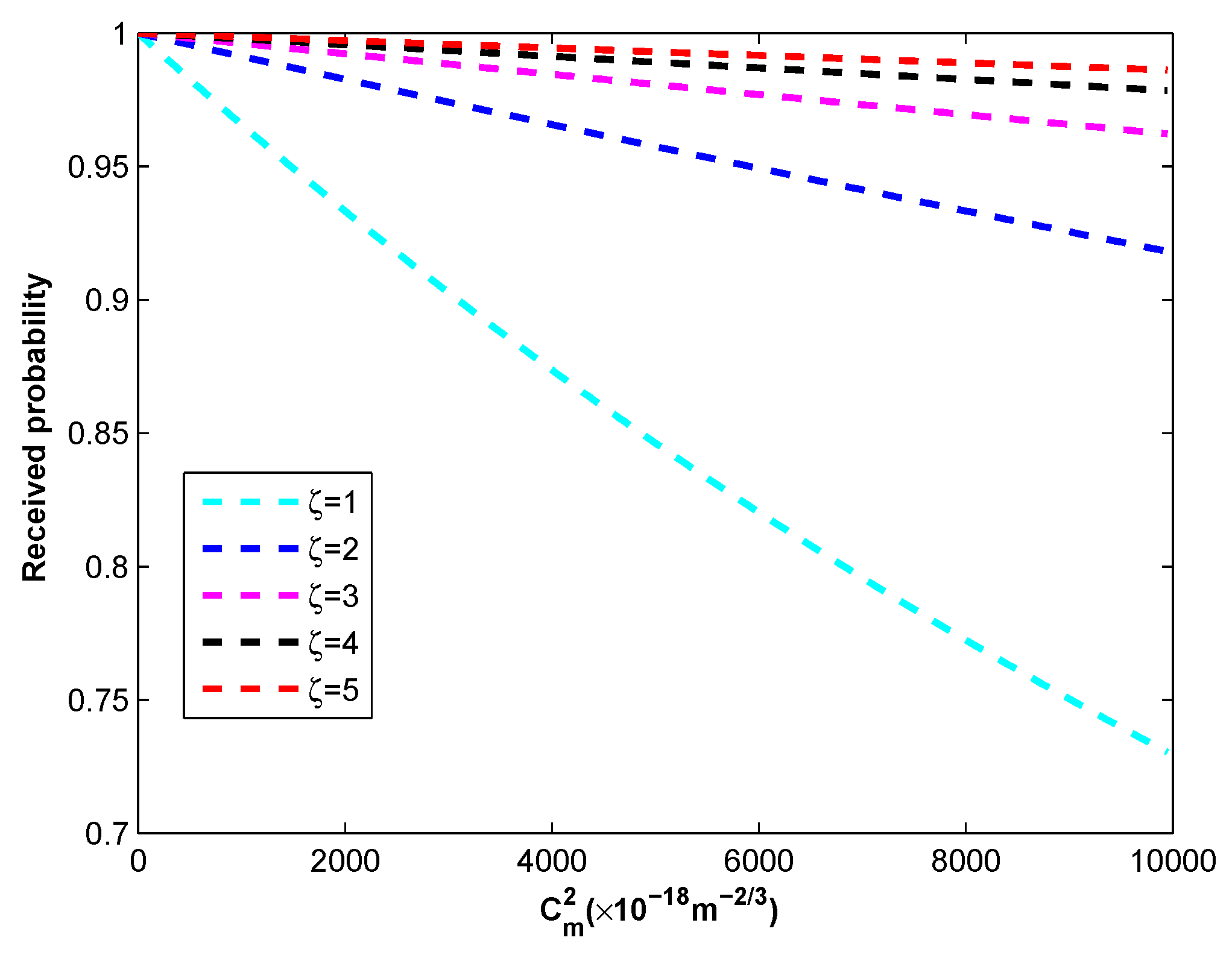 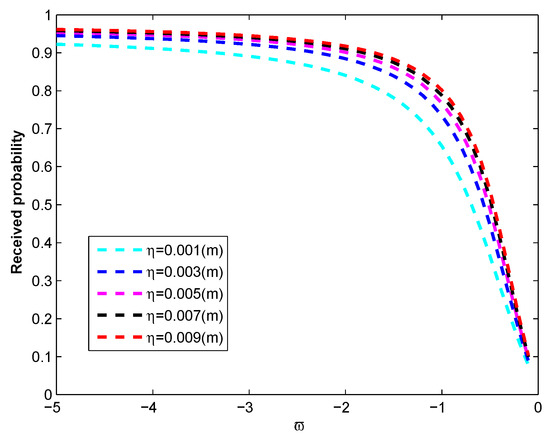 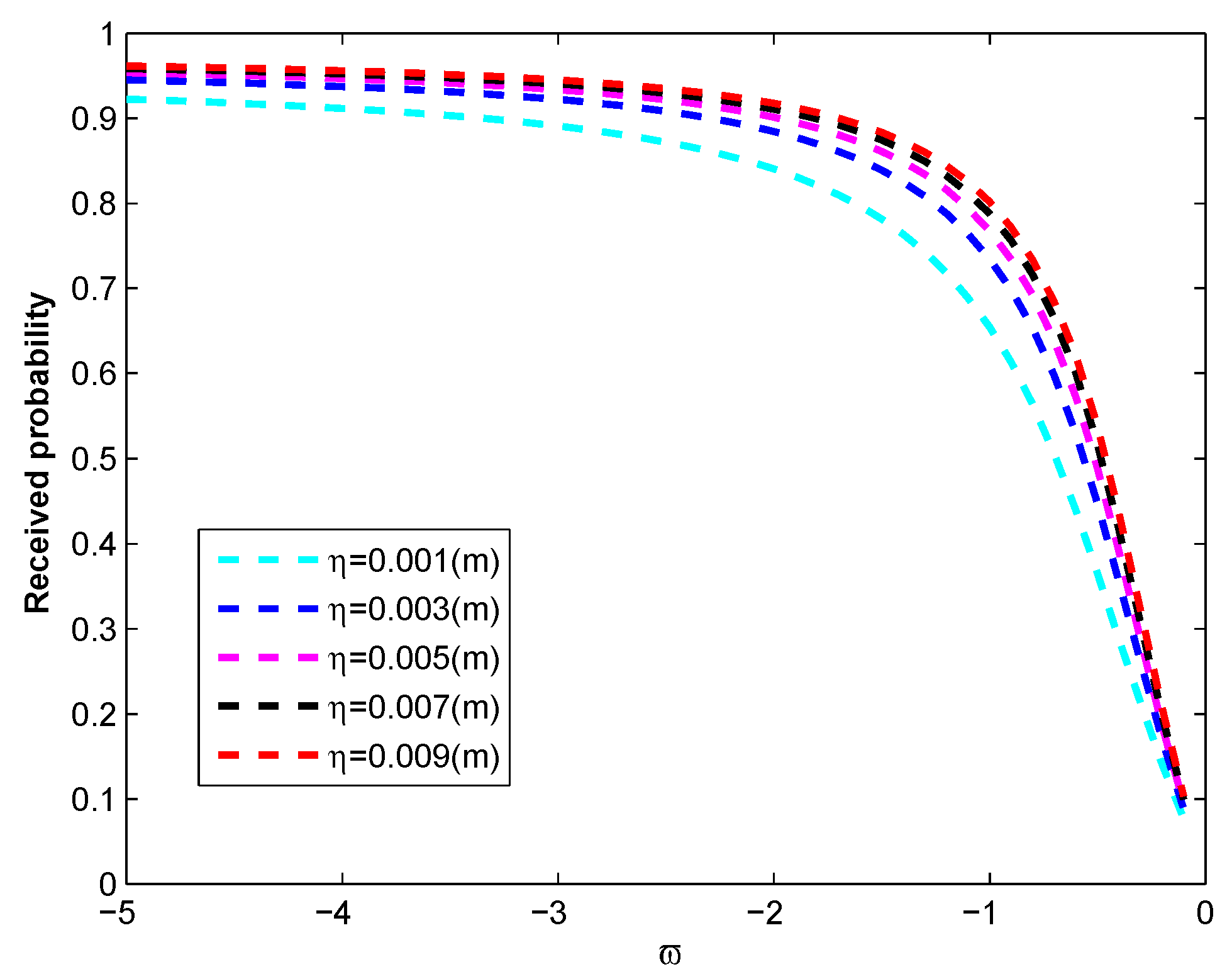 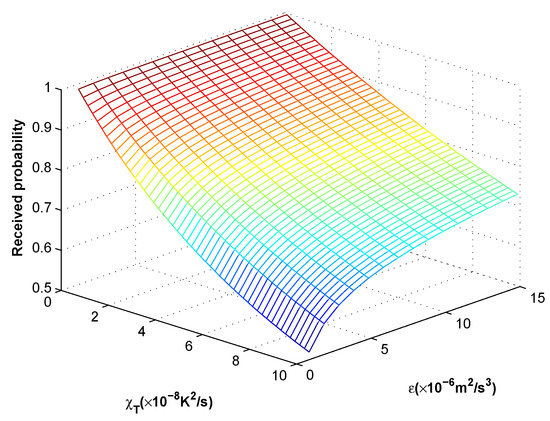 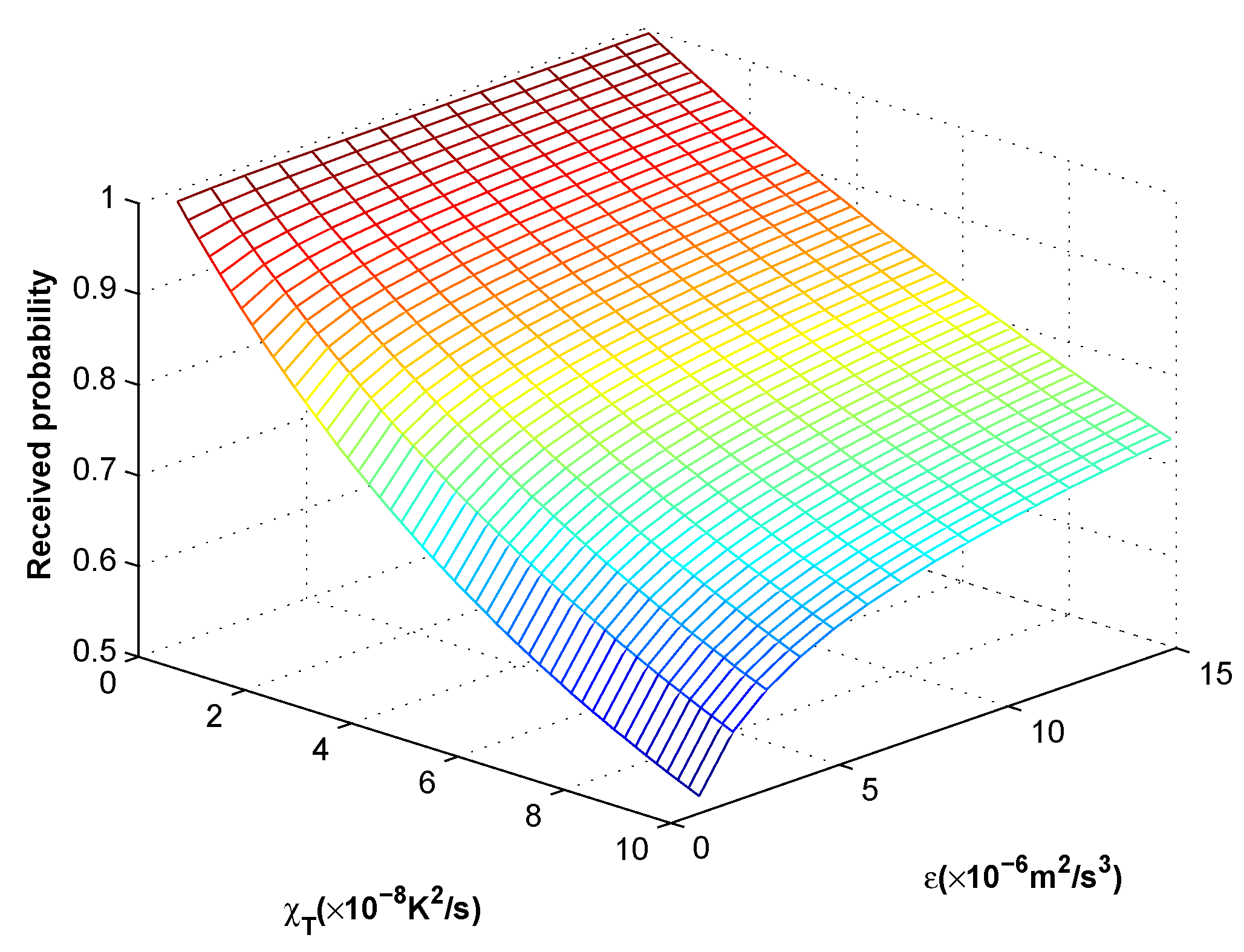 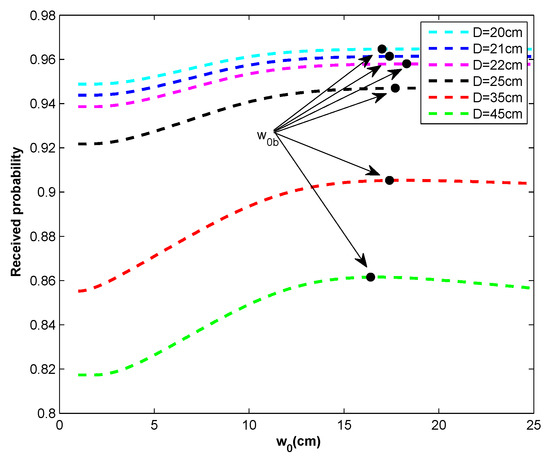 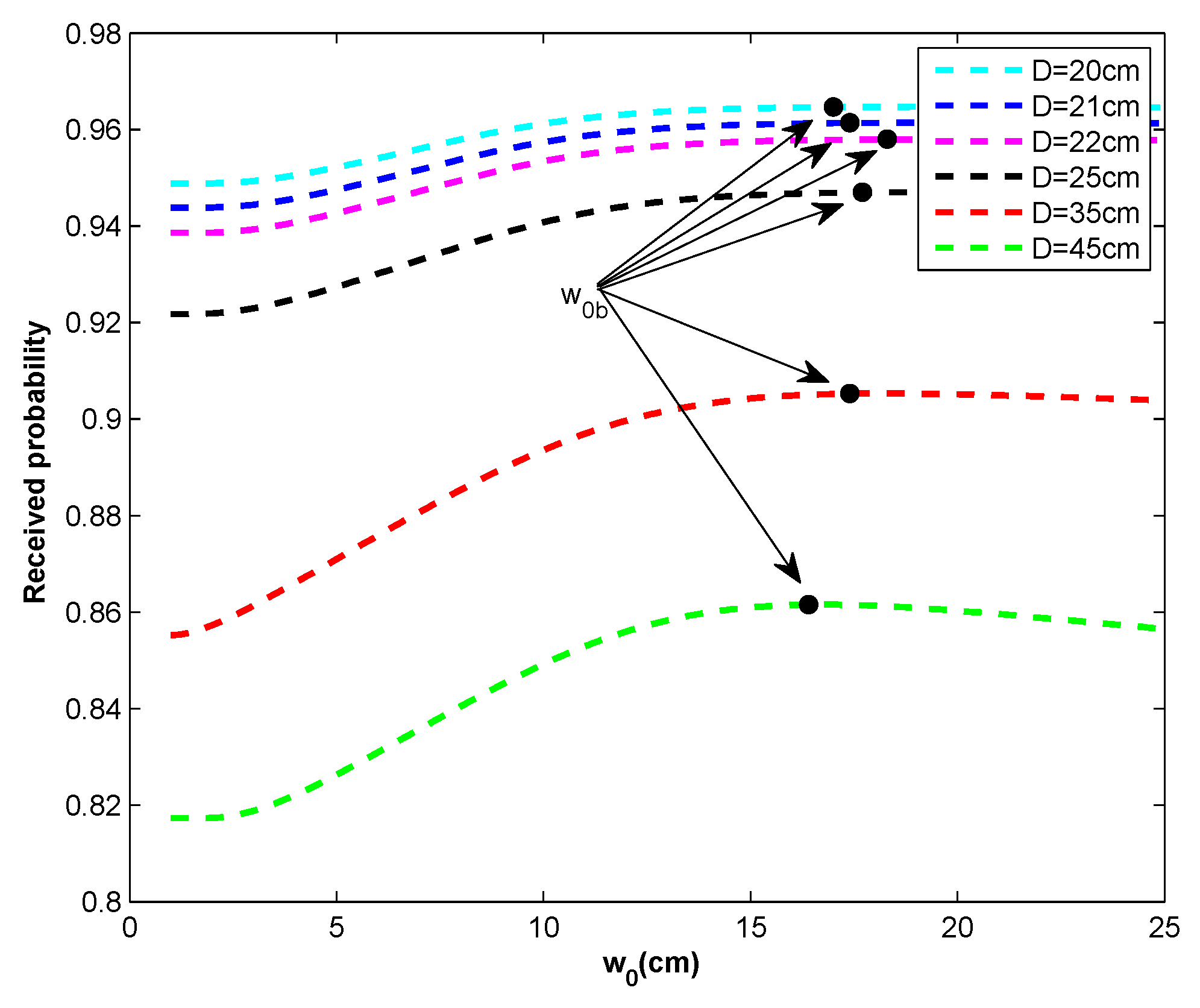 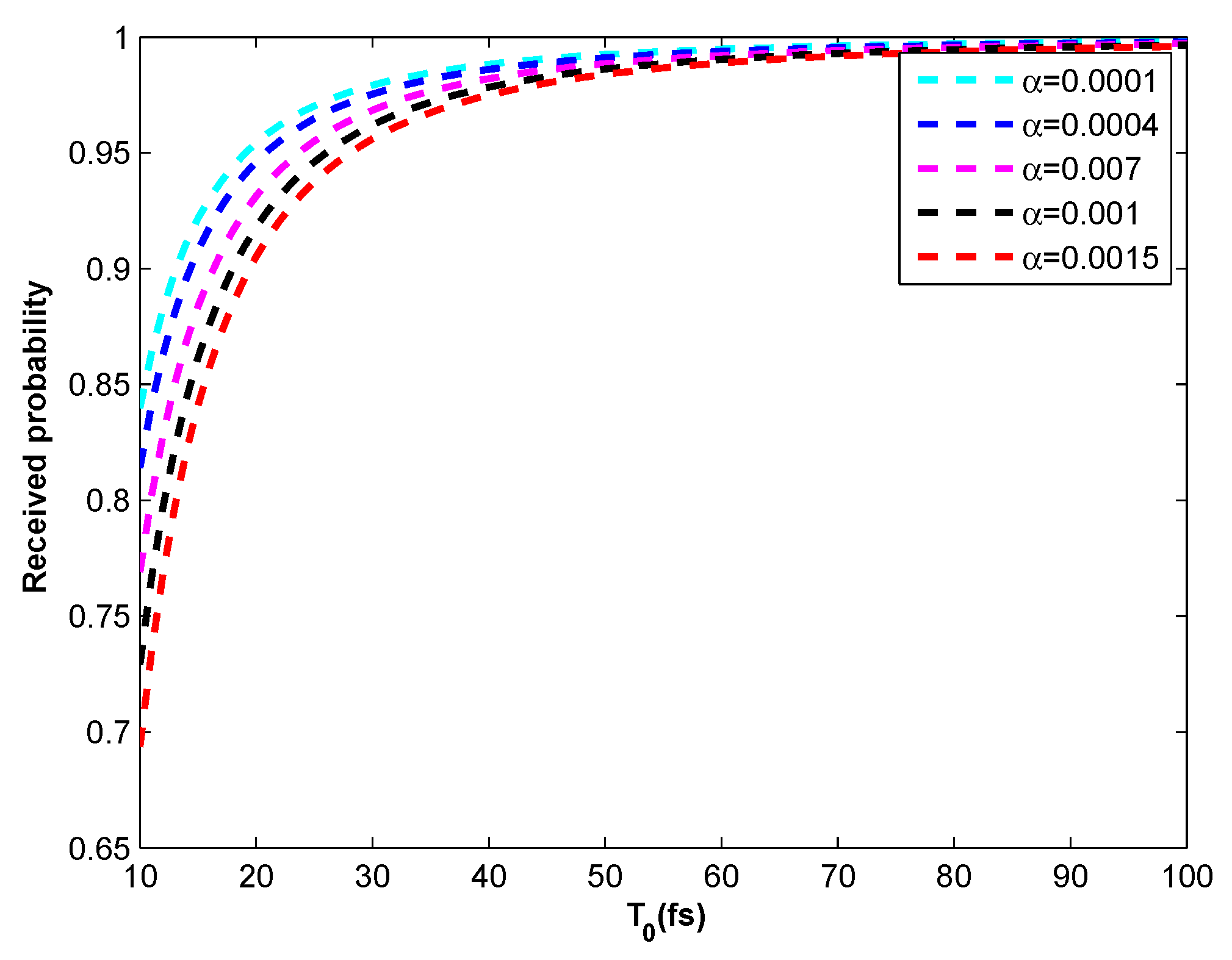