Origin of Pumice in Sediments from the Middle Okinawa Trough: Constraints from Whole-Rock Geochemical Compositions and Sr-Nd-Pb Isotopes

Frequent volcanic activity has occurred in the Okinawa Trough (OT) during the late Quaternary, which attracted much attention to the origin of volcanic rocks. Pumice collected from the seafloor has been extensively investigated, whereas few studies paid attention to the pumice in the sediment. The geochemical compositions of pumice preserved in sediments generally provide insight into past volcanic activity and regional magmatism. Here, we present major and trace element compositions and Sr-Nd-Pb isotope data, together with the established age framework for pumice samples recovered from sediment core S9 in the middle OT (MOT) to investigate their possible formation. Compositionally, the S9 pumice samples are dacite and are characterized by relatively higher Sr (87Sr/86Sr = 0.70480–0.70502) and Pb (206Pb/204Pb = 18.321-18.436, 207Pb/204Pb = 15.622–15.624, and 208Pb/204Pb = 38.52–38.63) and lower Nd (143Nd/144Nd = 0.51272–0.51274) isotope compositions than basalts from the MOT. The geochemical compositions of pumice clasts from different layers of core S9 display no temporal variation trends and vary within narrow ranges. On the basis of the geochemical characteristics of S9 pumice samples, we infer that the parent magma of these samples might generate from hybrid magma through an extensive fractional crystallization process. The Indian Ocean MORB-type mantle was first metasomatized by the subducted Philippine Sea sediments to form the primitive magma; then, followed by assimilation of a small amount of lower crustal component occurred in the lower crust. The long-term magmatism and relatively consistent isotopic compositions indicate that a magma chamber might have existed in the lower crust of the MOT between 11.22 and 12.96 cal. ka BP. View Full-Text
Keywords: pumice in sediments; Sr-Nd-Pb isotope; hybrid magma; fractionation crystallization; origin of pumice; middle Okinawa Trough pumice in sediments; Sr-Nd-Pb isotope; hybrid magma; fractionation crystallization; origin of pumice; middle Okinawa Trough
►▼ Show Figures 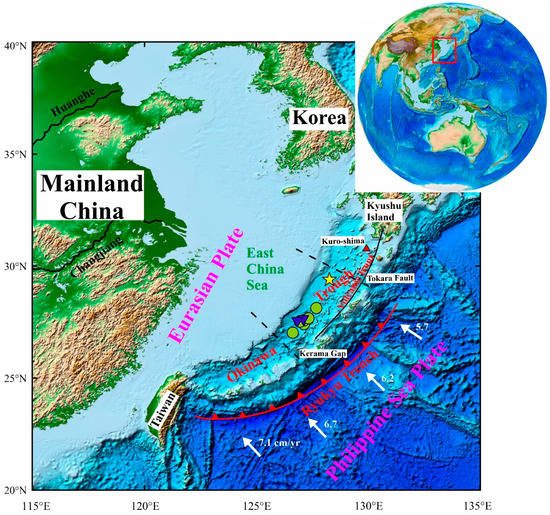