Deployment and Maintenance of Wave Energy Converters at the Lysekil Research Site: A Comparative Study on the Use of Divers and Remotely-Operated Vehicles

This paper describes a novel thruster fault-tolerant control system (FTC) for open-frame remotely operated vehicles (ROVs). The proposed FTC consists of two subsystems: a model-free thruster fault detection and isolation subsystem (FDI) and a fault accommodation subsystem (FA). The FDI subsystem employs fault detection units (FDUs), associated with each thruster, to monitor their state. The robust, reliable and adaptive FDUs use a model-free pattern recognition neural network (PRNN) to detect internal and external faulty states of the thrusters in real time. The FA subsystem combines information provided by the FDI subsystem with predefined, user-configurable actions to accommodate partial and total faults and to perform an appropriate control reallocation. Software-level actions include penalisation of faulty thrusters in solution of control allocation problem and reallocation of control energy among the operable thrusters. Hardware-level actions include power isolation of faulty thrusters (total faults only) such that the entire ROV power system is not compromised. The proposed FTC system is implemented as a LabVIEW virtual instrument (VI) and evaluated in virtual (simulated) and real-world environments. The proposed FTC module can be used for open frame ROVs with up to 12 thrusters: eight horizontal thrusters configured in two horizontal layers of four thrusters each, and four vertical thrusters configured in one vertical layer. Results from both environments show that the ROV control system, enhanced with the FDI and FA subsystems, is capable of maintaining full 6 DOF control of the ROV in the presence of up to 6 simultaneous total faults in the thrusters. With the FDI and FA subsystems in place the control energy distribution of the healthy thrusters is optimised so that the ROV can still operate in difficult conditions under fault scenarios. View Full-Text
Keywords: fault-tolerant control; thruster fault; fault detection and isolation; fault accommodation; ROV; remotely operated vehicle; underwater vehicle fault-tolerant control; thruster fault; fault detection and isolation; fault accommodation; ROV; remotely operated vehicle; underwater vehicle
►▼ Show Figures 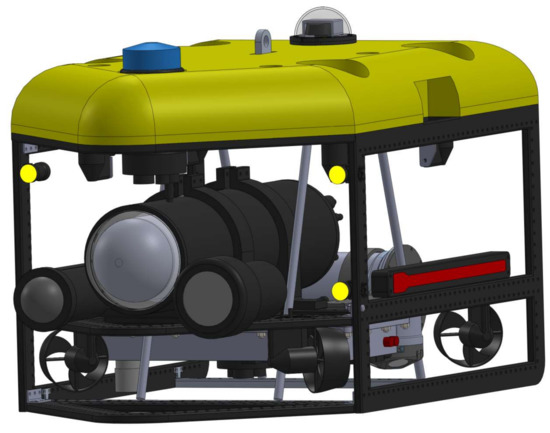