A stormwater runoff model based on the Soil Conservation Service (SCS) method and a finite-volume based water quality model have been developed to investigate the use of Simulink for use in teaching and research. Simulink, a MATLAB extension, is a graphically based model development environment for system modeling and simulation. Widely used for mechanical and electrical systems, Simulink has had less use for modeling of hydrologic systems. The watershed model is being considered for use in teaching graduate-level courses in hydrology and/or stormwater modeling. Simulink’s block (data process) and arrow (data transfer) object model, the copy and paste user interface, the large number of existing blocks, and the absence of computer code allows students to become model developers almost immediately. The visual depiction of systems, their component subsystems, and the flow of data through the systems are ideal attributes for hands-on teaching of hydrologic and mass balance processes to today’s computer-savvy visual learners. Model development with Simulink for research purposes is also investigated. A finite volume, multi-layer pond model using the water quality kinetics present in CE-QUAL-W2 has been developed using Simulink. The model is one of the first uses of Simulink for modeling eutrophication dynamics in stratified natural systems. The model structure and a test case are presented. One use of the model for teaching a graduate-level water quality modeling class is also described. View Full-Text
Keywords: Simulink; water quality; model development; mass balances; hydrology Simulink; water quality; model development; mass balances; hydrology
►▼ Show Figures 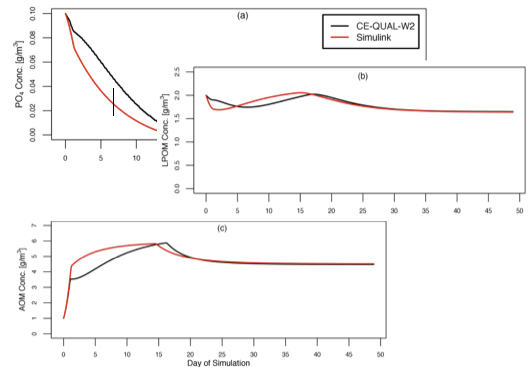