:
Multiple wave energy converter (WEC) buoys can be used to establish a WEC array-powered microgrid collectively forming a Marine Energy Grid (MEG). An oceanic domain with gravity waves will have significant spatial variability in phase, causing the power produced by a WEC array to have high peak-to-average ratios. Minimizing these power fluctuations reduces the demand for large energy storage by WEC array-powered DC microgrids while also reducing losses in the undersea cable to the shore. Designs that reduce energy storage requirements are desirable to reduce deployment and maintenance costs. This work demonstrates that polyphase power in conjunction with an energy storage system can be used to maintain constant power. This work shows that an N WEC array geometry can be designed to reduce the energy storage requirements needed to mitigate the power fluctuations if the WEC array produces constant, polyphase power. Additionally, the conditions that identify the wave frequencies and control the effort needed to produce polyphase power are developed. This paper also shows that increasing the number of WECs in an array reduces aggregate power fluctuations. Finally, WEC array power profiles are investigated using simulation results to verify the mathematical conditions developed for the three and six WEC cases.
Keywords:
marine energy grid; microgrid; energy storage system; polyphase power; marine structures; wave energy converters (WEC); complementary phase

The motivation of this paper is to explore ways to achieve constant power through design and WEC force control, thereby facilitating the grid integration of WEC arrays. The ESS can be supplemented by control action in such a way that the power injections from the WEC array are maximized while at the same time ensuring that the power fluctuations are minimized.
This paper hypothesizes that the power fluctuations in the aggregate power produced by a WEC array can be minimized by placing the individual WECs in the array at locations that receive the incoming wave at staggered phase differences. If the phase offsets amongst individual WECs results in polyphase power, the phases of the powers they produce individually are staggered, but the aggregate sum of these powers is constant.
This paper develops strategies that can help reduce the energy storage requirements of MEGs. This paper recommends that the polyphase condition should be a design parameter for WEC array layout and control. The recommendations made in this paper can be easily integrated with PTO force control strategies. This paper proposes that the WEC array PTO force control should be informed by the advantages of producing polyphase power. This paper demonstrates that a WEC array that produces polyphase power will require a smaller ESS and will require less controller effort when compared with nonpolyphase power.
The rest of this paper is organized as follows; Section 3 develops the mathematical conditions needed to design a WEC array that produces polyphase power. A simulation case study is presented in Section 4. Finally, conclusions are made in Section 5.

While the previous development was motivated by the WEC array application, it did not consider the WEC’s dynamic response. Thus, it was applicable to any set of N generators but ignored the more realistic WEC response to waves. In this section, constant power conditions are explored using WEC array dynamic models. Three and six-WEC arrays were considered for the special case described above, where their inter-WEC spacing, , was constant and their power outputs were identical, . The WEC array simulation included a storage controller that ensured the total power was constant regardless of the wave frequency or spacing. The simulation was executed by sweeping through a range of wave frequencies where the storage power sinusoidal amplitude was used to assess performance. Similar to the analysis above, the six-WEC array was less sensitive to variations in the conditions that yielded constant power than the three-WEC array.
The WEC array model consisted of N cylindrical buoy point absorbers, each with radius and draught. It was assumed that their constant, inter-WEC spacing L was sufficiently large so there was no dynamic coupling. Furthermore, all of the WECs incident waves had the same properties and so their power outputs were identical as mentioned above. The local water depth was .
The ith WEC’s dynamic model was adapted from [26,27] and is shown in Equation (15), where the i subscripts are omitted for brevity.
The added mass at the infinite frequency is denoted by , and the forces on the right are excitation, , control, , radiation, , and hydrostatic . The expressions for each are given in Equation 16. where is the excitation impulse response function, is the wave elevation, is the radiation impulse response function, and is the linear hydrostatic stiffness constant. z and correspond to the vertical WEC displacement and velocity, respectively. The hydrostatic stiffness constant and other hydrodynamic coefficients were generated using the boundary element solver in the hydrodynamic analysis software WAMIT. and were computed using the Fourier-transform of the frequency-dependent excitation force and radiation damping hydrodynamic coefficients, respectively, and are shown in Figure 4. Similarly, the added mass at infinite frequency was found to be kg, and the hydrostatic stiffness was found to be kN/m. The rate feedback control law, , is a subset of the family introduced earlier in Equation (3). The excitation force contains the dynamic Froude–Krylov and diffraction forces. The linear assumptions require that the incoming waves have small amplitude and steepness and that the WEC motions are also small.
The peak RMS power and energy were calculated for the last 100 s of the simulations (total run time being 500 s) to avoid the initial transient behavior. The peak RMS power as shown in Figure 5 was calculated using the storage power sinusoidal amplitude in Equation (10). The energy spent by the ESS was calculated by integrating the storage power over the last 100 s, which in this case would be . Notice, in Figure 5, that the ESS power increases with an increase in wave frequency while the ESS energy is less sensitive to increases in wave frequency because, as the power increases, so does the wave frequency. Therefore, the ESS specifications should be informed by both the power and energy requirements.
The ith WEC’s power output is given by Equation (4), with , and the total WEC power by Equation (5). When the array conditions are such that constant power is achieved, the total power is . This value was used as the reference for the storage controller, which simply added the necessary power to make up the difference between the reference and the instantaneous, total WEC power output.
For both the three-WEC and six-WEC arrays, the simulation was used to assess the storage needed to produce constant power with inter-WEC spacing held at . The incident wave amplitude was , and the wave frequency was incremental for a total of 1000 frequencies between to . At each frequency, the simulation was allowed to run for 500 s. The simulated storage power for both cases are shown in Figure 5. The constant power frequencies are shown as red dots as computed by the set of Equation (14). As expected, these match well with the minima of the simulated storage power.
One of the primary differences between the three- and six-WEC arrays is their sensitivity to variations in wave frequency. If the objective is to reduce the amount of oscillation in the array power, the least desirable situation is when the wave frequency corresponds to a local maximum in the storage plots. Selecting a spacing that avoids the maxima for the expected wave frequency variation is more easily achieved for the six-WEC array. This storage “flatness” increases dramatically with N.

Energy generated by a single wave energy converter needs modulation, but a network of WECs with staggered phases can complement each other to result in constant power that can be integrated to a marine energy grid. Increasing the number of WECs in a WEC array reduces the fluctuations in the aggregate power produced by the WEC array. If the WECs constituting the WEC array produce polyphase power, the fluctuations in the net power produced by the WEC array can be mitigated. This work shows that the phase of the ocean waves can inform the layout of a WEC array to produce polyphase power. The simulation model also demonstrates that the control effort to maintain constant power requirements can be significantly reduced if a WEC array produces polyphase power. Additionally, the constant total power is less susceptible to transmission losses for the undersea transmission lines. Finally, polyphase power generation capabilities can significantly reduce the size of the ESS needed for the power management of a MEG.
The work presented here can be expanded to planar irregular waves by designing the WEC array for the significant wave period and then by devising a control strategy to counter the power variation for the waves with smaller significant wave heights. The sinusoidal equations used here to develop the polyphase conditions assumes two dimensional waves. Similar approach based on the summation of sinusoidal series can be used for three-dimensional seas where the argument of the wave elevations has both the x and y coordinates. 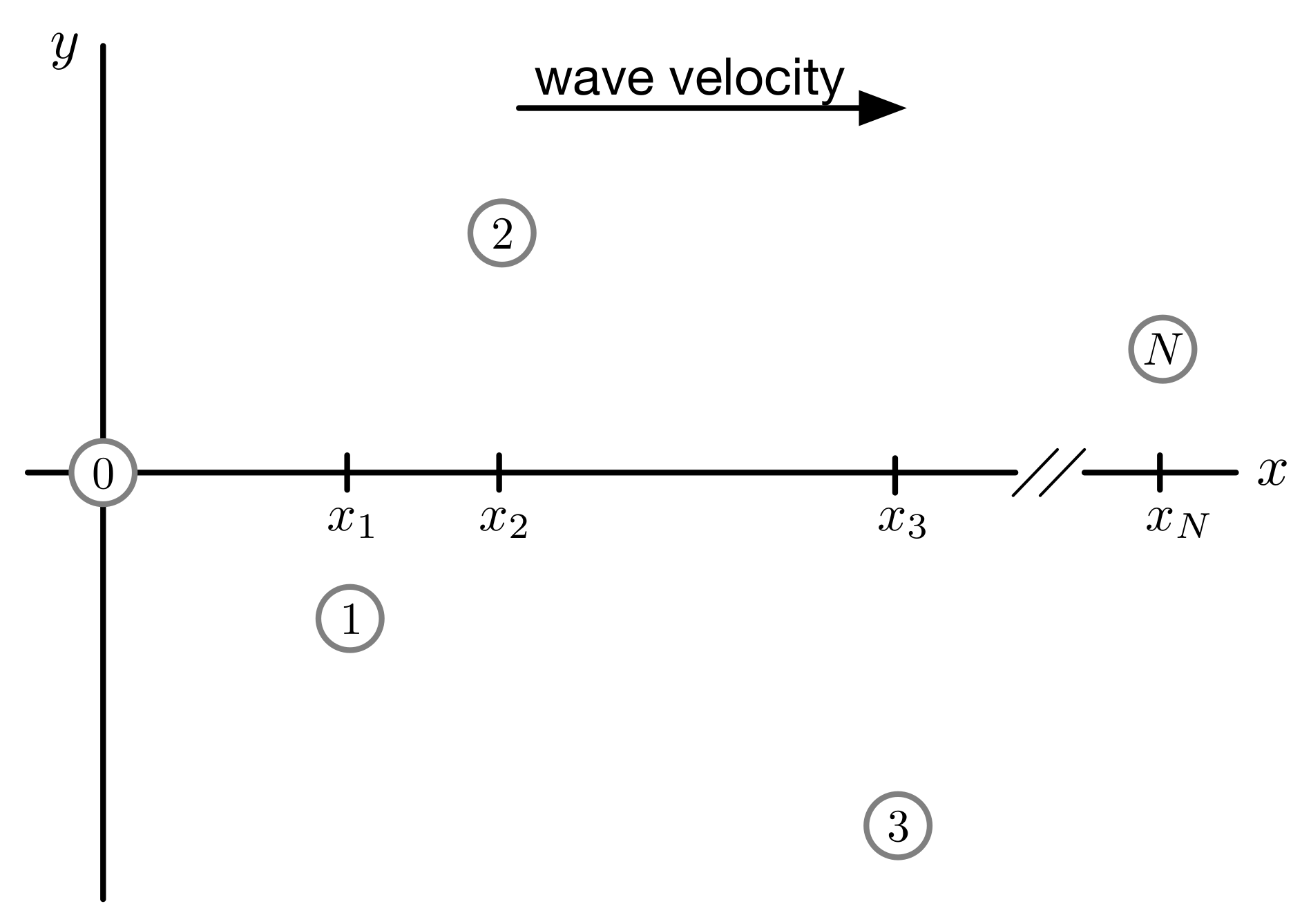 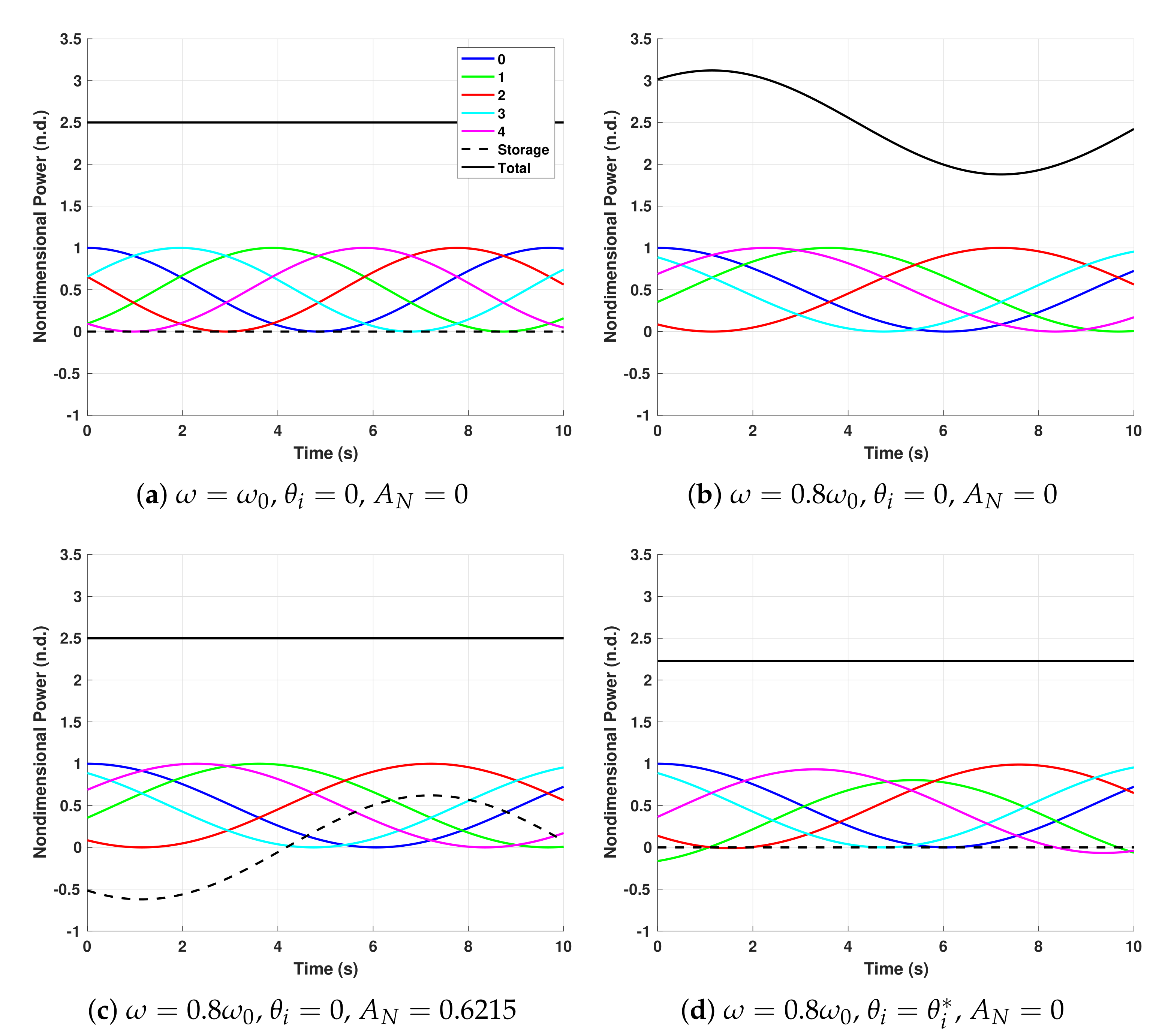 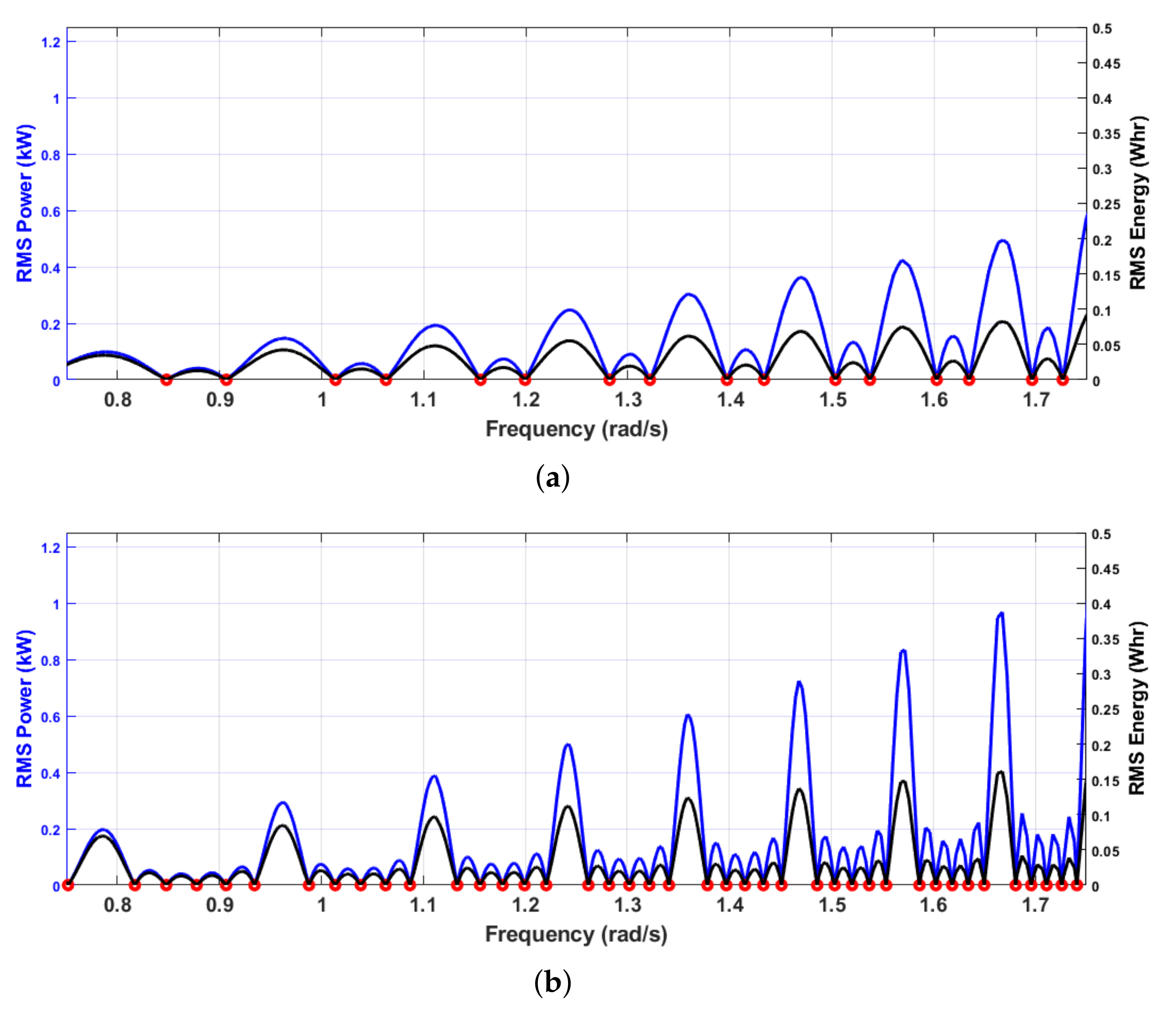