Intercropping is a common cultivation system in sustainable agriculture, allowing crop diversity and better soil surface exploitation. Simulation of intercropped plants with integrated soil–plant–atmosphere models is a challenging procedure due to the requirement of a second spatial dimension for calculating the soil water lateral flux. Evaluations of more straightforward approaches for intercrop modeling are, therefore, mandatory. An adaptation of the 1D model Soil, Water, Atmosphere and Plant coupled to the World Food Studies (SWAP/WOFOST) to simulate intercropping (SWAP 2×1D) based on solar radiation and water partitioning between plant strips was developed and the outcomes are presented. An application of SWAP 2×1D to maize–soybean (MS) strip intercropping was evaluated against the monocropping maize (M) and soybean (S) simulated with the 1D model SWAP/WOFOST, and a sensitivity analysis of SWAP 2×1D was carried out for the intercropping MS. SWAP 2×1D was able to simulate the radiation interception by both crops in the intercropping MS and also to determine the effect of the radiation attenuation by maize on soybean plants. Intercropped plants presented higher transpiration and resulted in lower soil evaporation when compared to their equivalent monocropping cultivation. A numerical issue involving model instability caused by the simulated lateral water flux in the soil from one strip to the other was solved. The most sensitive plant parameters were those related to the taller plant strips in the intercropping, and soil retention curve parameters were overall all significantly sensitive for the water balance simulation. This implementation of the SWAP model presents an opportunity to simulate strip intercropping with a limited number of parameters, including the partitioning of radiation by a well-validated radiation sharing model and of soil water by simulating the lateral soil water fluxes between strips in the 2×1D environment. View Full-Text
Keywords: intercropping modeling; radiation sharing; lateral water flux; SWAP intercropping modeling; radiation sharing; lateral water flux; SWAP
►▼ Show Figures 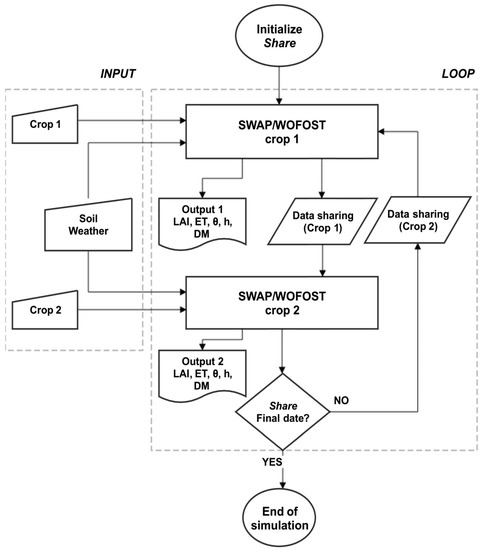