Weed hoeing can be successfully performed in wide row crops, such as sugar beet, maize, soybean and wide spaced cereals. However, little experience is available for hoeing in narrow cereal row spaces below 200 mm. Yet, mechanical weed control can pose an alternative to herbicide applications by reducing the herbicide resistant populations present in the field. In this experiment, it was investigated whether hoeing is feasible in cereals with 150 and 125 mm row spacings. The trial was set up at two locations (Ihinger Hof and Kleinhohenheim) in southwest Germany. Three different conventional hoeing sweeps, a goosefoot sweep, a no-till sweep and a down-cut side knife were adjusted to the small row widths, and hoeing was performed once with a tractor and a standard hoeing frame which was guided by a second human operator. The average grain yield, crop and weed biomass, and weed control efficacy of each treatment were recorded. The goosefoot and no-till sweep were tested at driving speeds of 4 and 6 km·h−1. The down-cut side knife was applied at 4 km·h−1. The results indicate that hoeing caused no yield decrease in comparison to a conventional herbicide application or manual weeding. The highest yield with a mechanical treatment was recorded for the no-till sweeps at both trial locations. Hoeing was performed successfully in narrowly spaced cereals of 150 and 125 mm, and the weed control efficacy of the mechanical treatments ranged from 50.9% at Kleinhohenheim to 89.1% at Ihinger Hof. Future experiments are going to focus on more distinct driving speeds ranging from 2 to 10 km·h−1 and performing more than one pass with the hoe. Additionally, combining the mechanical weeding tools with a camera-steered hoeing frame could increase accuracy, allow for higher working speeds and substitute the second human operator guiding the hoe. View Full-Text
Keywords: mechanical; hoeing; control; weeds; cereals; narrow; yield mechanical; hoeing; control; weeds; cereals; narrow; yield
►▼ Show Figures 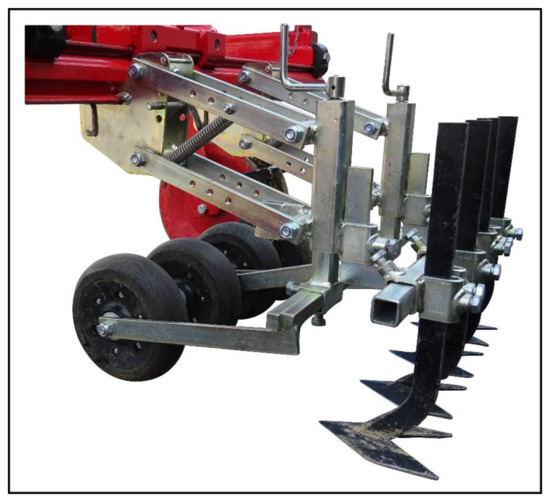