It is well-documented that the conversion of native vegetation for agricultural land use leads to losses of 25–50% of soil organic carbon (SOC) [1]. Losses of SOC and the associated nitrogen (N) and phosphorus (P) (collectively referred to here as soil organic matter or SOM) from agricultural soils threatens future food security due to decreases in crop productivity, increased soil erosion, and is a net source of atmospheric greenhouse gases [2,3,4]. Microbial metabolism converts input organic matter to form stable, long-term metabolites adsorbed to soil particles, which could be a means to restore SOM in agricultural systems [5,6,7]. This SOM can be further metabolised (and therefore not retained) to meet cellular requirements in N-poor systems. This process is referred to as N mining, which is characterised by a net increase in decomposition as microorganisms degrade recalcitrant organic matter (OM) to acquire N [8,9,10]. Consequently, the carbon-to-nitrogen (C:N) ratio of input organic matter can affect the retention of SOM [8,11,12].
Bacterial taxa within the phylum Actinobacteria are often observed to be relatively more abundant in agricultural soils compared to other phyla [13,14,15]. Members of the order Actinomycetales, in particular, are ubiquitous within soil, water, and plant litter environments, and have long been considered to play an important role in carbon (C) cycling [16]. Streptomyces coelicolor A3(2) has been studied extensively by the scientific community [17] and the 8.67 Mbp linear genome of S. coelicolor A3(2) has been sequenced and annotated [18]. The majority of this microorganism’s genome is devoted to the regulation, transportation, and degradation of extracellular nutrients, and it is well adapted to the spatially heterogeneous and temporally variable soil environment [18]. Metabolic analyses have observed sensitivity to nutrient availability, with switches from the Embden–Meyerhof–Parnas pathway to the pentose phosphate pathway when transitioning from exponential to stationary growth [19], in addition to significant changes in the regulation of N and P metabolism during this transition [20]. Both genomic and metabolic analyses support the utilisation of a variety of C sources by S. coelicolor A3(2), such as glucose, cellulose, cellobiose, xylose, glycerol, galactose, fructose, arabinose, chitin, and N-acetyl glucosamine [18,19]. The metabolic diversity and strict metabolic regulation of this soil microorganism make it an ideal candidate to better study N mining responses in a model system.
The objective of this study was to study differential gene expression (DGE) in S. coelicolor A3(2) during the decomposition of plant material with varying N concentrations. These were: (a) wheat (Triticum aestivum L.) (C:N ratio 35.7); and (b) mung bean (Vigna radiata L.) (C:N ratio 17.3). Differential gene expression was compared over time (at 1, 7, and 14 days of incubation). We hypothesised that S. coelicolor A3(2) would undergo significant transcriptional changes in response to plant material with varying C:N ratios, targeted at greater acquisition and catabolism of N sourced from native SOM in response to wheat, relative to mung bean.

A subsample of soil was treated with gamma-irradiation to a total gamma-ray dosage of 35 kGy [23,24]. A total of 2 g of gamma-irradiated soil and 200 mg of either ground wheat or mung bean material (10% weight/weight) were added to a sterilised gas-tight Hungate tube (Bellco, Vineland, NJ, USA). Once S. coelicolor A3(2) had reached the beginning of the exponential growth phase, cells were washed twice with 5 mL sterile 10 mM potassium phosphate buffer (PPB) (pH 6.8) by centrifugation at 3000 × g for 10 min and resuspended in 1 mL 10 mM PPB. To bring the soil to field capacity moisture, 720 microlitres of S. coelicolor A3(2) cells resuspended in 10 mM PPB were added to the treatments. Negative controls were prepared by adding 720 µL 10 mM PPB to duplicate gamma-irradiated soil samples. All incubations were performed in triplicate. Final sample weights were noted to readjust moisture levels with 10 mM PPB over time. Incubations were performed statically at 28 °C.

Incubated soils were resuspended in 4 mL of 10 mM PPB, aliquoted separately in 1 mL volumes, and preserved by snap-freezing on liquid nitrogen. Total RNA was extracted from 1 mL soil resuspensions at time points 1, 7, and 14 days with MoBio RNA Powersoil Total RNA Isolation kits (MoBio Laboratories, Carlsbad, CA, USA), in accordance with the manufacturer’s instructions. Extracted RNA was treated with RNase-free DNase I (New England Biolabs, Ipswich, MA, USA). Messenger RNA library preparation and transcriptomic sequencing on the Illumina HiSeq High Throughput platform with 150 bp single read chemistry was performed by the Australian Genome Research Facility (AGRF, Melbourne, Australia). All statistical analyses were performed in R version 3.4.1 [25]. For DGE analyses, sequencing data was first run through Trimmomatic [26] and FastQC (www.bioinformatics.babraham.ac.uk/projects/fastqc/) for quality control purposes. Bowtie2 [27] was used to align reads to the S. coelicolor A3(2) genome with local alignment and zero mismatches to improve the stringency of read mapping. SAMtools [28] was used to convert the output of Bowtie2 to the BAM format. In R, DESeq2 was used as described in Reference [29]. Sequence counts below 20 were filtered out. From the results of the S. coelicolor A3(2) DGE analyses, pairwise comparisons of C and N metabolism were conducted via Student’s t-tests, using the plant substrate as a categorical variable. A negative binomial general linear model was used to compare the effects of the C and N metabolism genes with time and plant substrate [30]. Finally, the sequence data was archived with the European Nucleotide Archive with the Project ID: PRJEB23455.

Here we demonstrate a suite of transcribed genes that are supportive of the N mining hypothesis. In short, under relatively N-limiting conditions, S. coelicolor A3(2) increased the transcription of genes involved in C and both organic and mineral N acquisition after 24 h. Despite this, S. coelicolor A3(2) assimilated less cellular N through GDH and transcribed less transporters for glutamate uptake relative to non N-limiting conditions. After 14 days, N mining had increased in the low C:N ratio treatment as a delayed response to N requirements. This emphasises the importance of regulating the C:N stoichiometry of the soil system in order to improve the management of SOM.

The authors wish to thank the Australian Commonwealth Department of Agriculture Farming and Futures Filling the Research Gap for funding.

The authors wish to acknowledge the helpful contributions of two anonymous reviewers, whose comments helped to improve the research. 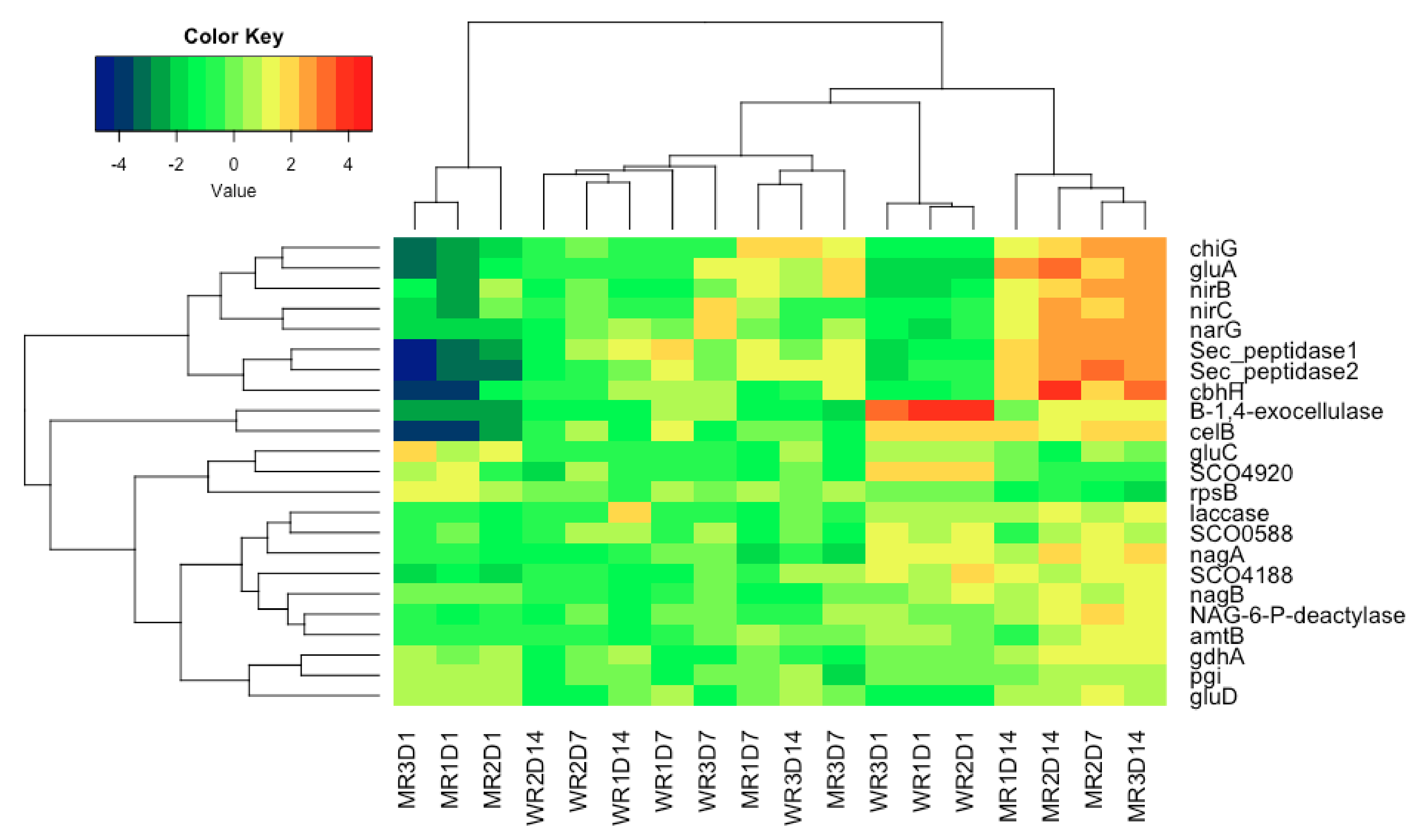 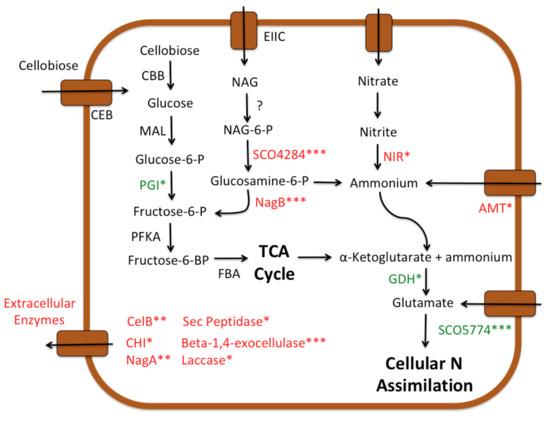