Poor quality in turfgrass mowing is highlighted by the shredded leaf tips with necrotic tissues that give an unsightly brownish colour to the turf and may also lead to turf disease. Mowing quality is also typically assessed by visual rating, thus the score depends on the person doing the assessment. To make the evaluation of mowing quality not subjective, an innovative method was developed. The aim of the trial was to examine the effects of different mowing systems and two different nitrogen rates (100 and 200 kg ha−1) on two turfgrass species in order to test the new mowing quality calculation. Three different mowing systems were used: a battery-powered rotary mower set at 3000 rpm and 5000 rpm respectively and a gasoline-powered rotary mower set at full throttle. The battery-powered mower at low blade rpm produced a poorer mowing quality and turf quality than the gasoline-powered mower and battery-powered mower at high rpm, which produced a similar mowing quality and turf quality. Leaf tip damage level values showed a significant correlation with the results of the visual mowing quality assessment. Lower leaf tip damage level values (slightly above 1) corresponded to higher visual mowing quality scores (around 8).
Keywords: rotary mowing; dull blades; leaf shredding rotary mowing; dull blades; leaf shredding

Mowing plays a key role in turfgrass management [1,2] and is one of the most frequent and intensive stresses for a turfgrass since it removes part of the photosynthetic leaf area [2]. The specific features of each turfgrass species should be considered when mowing the turf [1].
To produce the same amount of dry matter, warm-season species require less water, thus are more suitable for Mediterranean climates [3,4,5]. Warm-season species also have superior recovery and wear resistance compared to cool-season species [6,7]. Some warm-season species are hard-to-mow such as zoysiagrass (Zoysia spp.) and bermudagrass (Cynodon spp.) [3]. Mowers working on hard-to-mow sports turf species need to have their blades sharpened more frequently [8]. Hard-to-mow turf species have a high content of plant fibre hemi-cellulose that improves wear resistance [3,9]. Bermudagrass and its hybrid types are the most widespread warm-season species for golf course fairways and tees in the USA [10]. Bermudagrass and its hybrids are also commonly used for various sports turf applications [11].
For sports turfs, mowing is an important operation [12]. To have the best turf quality, the blades need to be sharpened so as to perform a clean cut with no shredding [2,13]. The quality of the mowing is reflected in the evenness of cut of the turfgrass leaves [3]. The mowing quality should always be as high as possible, especially for high quality sports turfs [1,2]. Dull mower blades can lead to shredded leaf tips [1,2,13]. After a few hours, the shredded leaf tips dry out, giving the turf a brownish and unsightly appearance [2,13]. Dull mower blades are also believed to increase the risk of turf disease [14]. However, Ellram et al. [15] found that Sclerotinia homoeocarpa (Dollar Spot) fungal disease incidence was not affected by mower blade sharpness.
Leaf shredding can also change how much water the turfgrass consumes. It is commonly believed that leaf shredding due to dull mower blades will increase water consumption, however Steinegger et al. [16] found that mowing a turf with dull blades reduced water consumption because a shredded turfgrass has a slower recovery and a lower shoot density. The fewer and slower growing plants will absorb less water.
Turfgrass mowers are generally divided into three groups: rotary mowers, reel mowers and flail mowers. Trenholm et al. [1] claim that flail mowers do not equal the mowing quality of rotary or reel mowers, thus their use should be limited to low-maintenance sites that are cut infrequently. Conversely, Parish and Fry [17] found that a properly sharpened flail mower can yield the same turf quality and mowing quality as a rotary mower.
Rotary mowers are the most widespread and versatile machines for home lawn maintenance in Italy [18]. Gasoline rotary mowers are usually chosen for larger home lawns, while electric rotary mowers are usually chosen for smaller home lawns. Electric rotary mowers are supplied with electricity using a cord or a battery. In the past, electric rotary mowers working on private lawns in Italy were supplied only with a cord. In fact, battery powered rotary mowers are still not in widespread use since their cost is higher compared to cord-supplied models and the surface they can cover usually ranges from 500 to 1000 m2 [18].
Both gasoline-powered and electric-powered rotary mowers share the same cutting principles and can both be equipped for mulching. Originally, the rpm adjustment of gasoline-powered rotary mowers could not be set precisely. The trend was thus to use gasoline-powered rotary mowers at full throttle. Technologically advanced machines such as battery-powered rotary mowers offer the possibility of precisely setting the revolutions per minute (rpm) value of the cutting blades. Unfortunately, it is still unknown whether battery-powered and gasoline-powered rotary mowers yield a different mowing quality.
Mowing quality is mainly evaluated by a visual assessment [19] and depends on the skills of the person observing the tips of the leaves after mowing, thus data collected by different people may vary. Howieson and Christians [2] studied the effects of four different mower settings (using a reel mower) and of trinexapac-ethyl on the turf quality and mowing quality of creeping bentgrass (Agrostis stolonifera L.). The mowing quality was assessed using three different methods: visual assessment, leaf tissue chlorophyll content and ethylene production, measuring the perimeter of the necrotic area 24 h after mowing. The four settings of the reel mower were related to the reel/bedknife contact. The four reel mower settings were: (A) slight contact, sharp blade; (B) no contact, sharp blade; (C) slight contact, dull blade; (D) no contact, dull blade. Mower setting (A) produced the lowest mowing injury and the highest turf quality and chlorophyll content. Mower setting (D) produced the lowest turf quality, chlorophyll content and the highest mowing injury, with the highest number of ragged leaf tips and necrotic tissues. Mower settings (B) and (C) produced an intermediate turf quality, chlorophyll content and mowing injury, however in some cases mower setting (C) produced similar results to mower setting (A). Howieson and Christians [20] also tested the blade sharpness and mowing injury of a reel mower which had been sharpened in different ways. To assess mowing injury, the authors [20] did not use a visual assessment but measured the length of the necrotic area due to leaf tip shredding. Carbide milling led to the lowest mowing injury and the greatest chlorophyll content, while cylindrical grinding led to the highest mowing injury and lowest chlorophyll content.
However, a trial to evaluate mower sharpness has not been carried out using rotary mowers. The aim of this study was to compare the effects of three different turfgrass mowing systems and two different nitrogen rates in order to test a new method developed at the University of Pisa to assess objective turfgrass mowing quality.

The experimental trial was carried out in S. Piero a Grado, Pisa (43°39′ N 10°21′ E, 5 m a.s.l.) in 2017 from May to November on a 14-month-old bermudagrass hybrid (Cynodon dactylon [L.] Pers. x Cynodon. transvaalensis Burtt-Davy) cv Patriot stand and on a two-year-old tall fescue (Festuca arundinacea Schreb.) cv Grande stand. The stands were established on a soil with the following properties: 91% sand, 5% silt, 4% clay, pH 6.5, 1.3 g kg−1 of organic matter; EC 0.46 dS m−1, water availability 3.45% w/w.
On 22 May, a two-way randomized blocks experimental design (A × B) with three replications was carried out. Factor (A) consisted in two nitrogen rates (100 and 200 kg ha−1) applied on 22 May and on 30 August with a rotary spreader using ammonium sulphate (21-0-0). Factor (B) consisted in three different walk-behind mowing systems: (1) gasoline rotary mower with a blade revolving speed of 2800 rpm (GM); (2) battery powered electric mower revving at 3000 rpm (BMS); (3) battery powered electric mower revving at 5000 rpm (BMF). The experimental area of each turf species was 216 m2, subdivided into three blocks, each of 72 m2 (6 × 12 m). The single plot was 12 m2 (3 × 4 m). Working speed was 3 km h−1. All mowers were equipped for clipping removal. The blades of all mowers were sharpened before every assessment with an angle grinder.
The gasoline-powered mower used in this trial was a Honda mod. HRD 536 HX (Honda France Manufacturing, Ormes, France). The mower was a self-propelled walk-behind rotary mower that can be equipped with mulching blades. The drive is hydrostatic, allowing a speed variation from 0 to 4.7 km h−1. The working width was 53 cm. Cutting height was adjustable from 1.4 to 7.6 cm. The power generator was a four-stroke gasoline engine with an output of 2.7 kW, with an overhead camshaft and a displacement of 160 cm3.
The battery-powered mower used was a Pellenc mod. Rasion Smart (Pellenc, Pertuis, France), which was a battery-powered self-propelled walk-behind rotary mower. This machine had two counter-revolving cutting blades, for a total working width of 60 cm. The machine was powered by three brushless electric motors, one for the cutting blades and two for the rear driving wheels. Each rear driving wheel was powered by a single electric motor, allowing each driving wheel to move independently from the others. The cutting height could be adjusted from 2.5 to 7.5 cm in increments of 1.0 cm with an electronic device. The speed of the electric drive could be electronically adjusted from 1 to 5 km h−1 in increments of 1 km h−1. The revolving speed of the cutting blades could also be electronically adjusted, ranging from 3000 to 5000 rpm. The battery capacity was 1100 Ah.
Plots were mowed once per week. Mowing height was 3.5 cm. Irrigation was applied as necessary to avoid wilt.
Every three weeks, starting on 17 May for the tall fescue stand and on 7 June for the bermudagrass stand, the following parameters were assessed and determined:
To determine the level of leaf tip damage, 12 fully expanded leaves per plot were collected 24 h after being cut with freshly sharpened blades (first mowing since sharpening). Leaves were attached to an A4 sheet. Digital imagery was acquired using a scanner (Epson mod. Stylus Photo RX585) at 4800 dpi resolution. Using Sketchup® software, the pictures of the leaves were enlarged 50 times for measuring (Figure 1 and Figure 2). The leaf tip damage level was calculated as the ratio between the length (mm) of the actual cut “LE” (with possible shredded tips) and length of the ideal cut “LI” (with no shredding at all) tangential to the edge of the leaf after the cut:
Leaf tip damage level = LE/LI [mm/mm]
When the leaf tip damage level is 1, the mowing quality is excellent (no shredding at all, perfect cut). As leaf tip damage level values increase mowing quality decreases.
Statistical analysis of biometric data was carried out with COSTAT 6.400 (CoHort Software, Monterey, CA, USA). All data were analysed by two-way analysis of variance (ANOVA) and an all pairwise Fisher’s least significant difference test (LSD) at the probability level of 0.05.
Leaf tip damage level data and subjective mowing quality data were analysed with a linear correlation and the Pearson correlation coefficient was determined.

We would sincerely like to thank Pellenc Italia S.r.l. (Colle di Val d’Elsa, Siena, Italy) for providing the battery-powered mower, technical assistance and supporting this research. 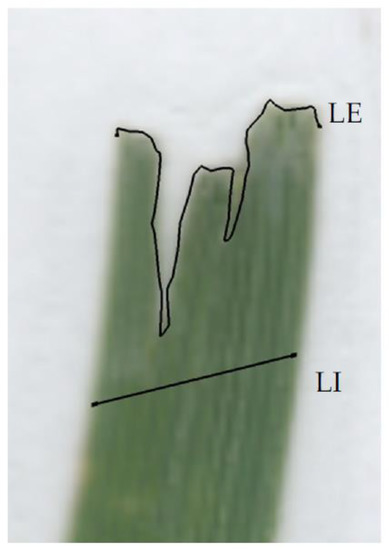 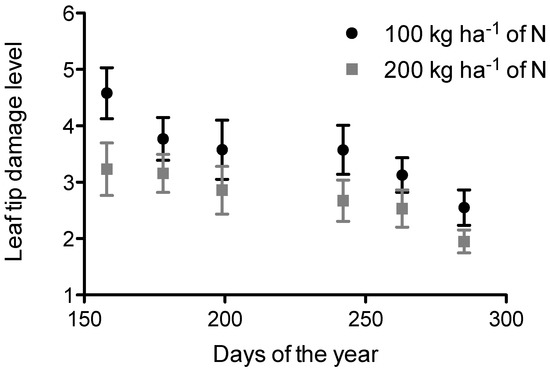 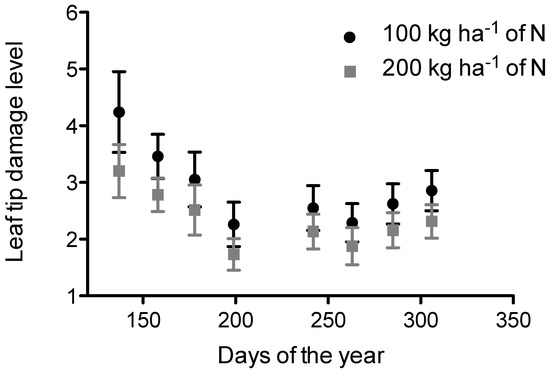 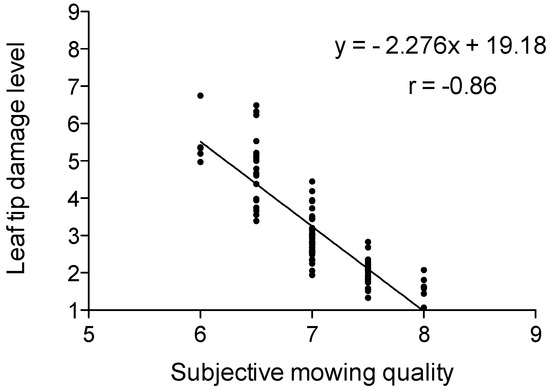 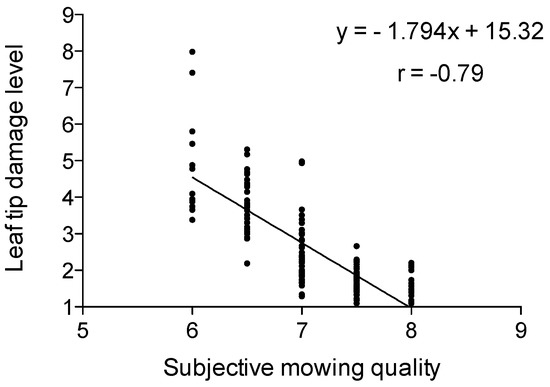 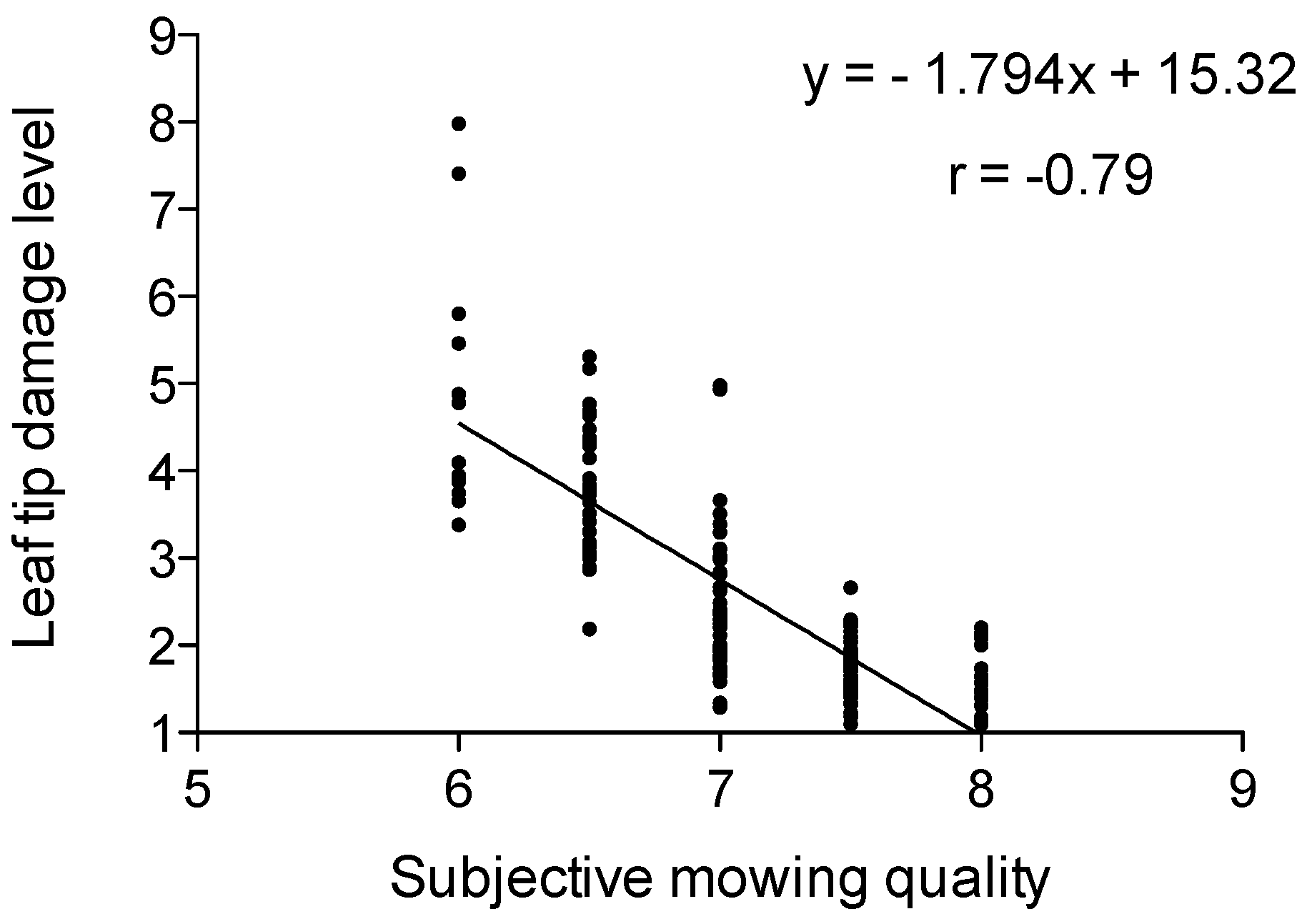