Despite their unrivalled value in livestock systems, certain temperate, pasture, legume species and varieties may contain phytoestrogens which can lower flock/herd fertility. Such compounds, whose chemical structure and biological activity resembles that of estradiol-17α, include the isoflavones that have caused devastating effects (some of them permanent) on the fertility of many Australian sheep flocks. While the persistence of old ‘oestrogenic’ ecotypes of subterranean clover (Trifolium subterraneum) in pasture remains a risk, genetic improvement has been most effective in lowering isoflavone production in Trifolium species; infertility due to ‘clover disease’ has been greatly reduced. Coumestans, which can be produced in Medicago species responding to stress, remain a potential risk in cultivars susceptible to, for example, foliar diseases. In the field, coumestrol is often not detected in healthy vegetative Medicago species. Wide variation in its concentration is influenced by environmental factors and stage of growth. Biotic stress is the most studied environmental factor and, in lucerne/alfalfa (Medicago sativa), it is the major determinant of oestrogenicity. Concentrations up to 90 mg coumestrol/kg (all concentrations expressed as DM) have been recorded for lucerne damaged by aphids and up to 600 mg/kg for lucerne stressed by foliar disease(s). Other significant coumestans, e.g., 4’-methoxy-coumestrol, are usually present at the same time. Concentrations exceeding 2000 mg coumestrol/kg have been recorded in diseased, annual species of Medicago. Oestrogenicity of some Medicago species is also influenced by maturity and senescence. Studies in Israel, North America, Europe, New Zealand and Australia have confirmed that coumestans in lucerne, represent an acute or sub-acute loss of reproductive efficiency in herbivores, e.g., sheep, cattle, and possibly horses. When sufficiently exposed peri-conception, coumestrol, sometimes present in lucerne, be it as pasture, hay, silage, pellets, meal, and sprouts, is associated with what can be an insidious, asymptomatic, infertility syndrome. Most livestock research with oestrogenic lucerne has been conducted with sheep. Ewes may be at risk when the coumestrol concentration in their diet exceeds 25 mg/kg. In studies where lambing was compared for lucerne and a phytoestrogen-free treatment, the mean decrease in lambs born/ewe was 13%; ewes on lucerne, exhibited a lower frequency of multiple births. View Full-Text
Keywords: alfalfa; annual medics; clover disease; coumestans; coumestrol; fertility; isoflavones; lucerne alfalfa; annual medics; clover disease; coumestans; coumestrol; fertility; isoflavones; lucerne
►▼ Show Figures 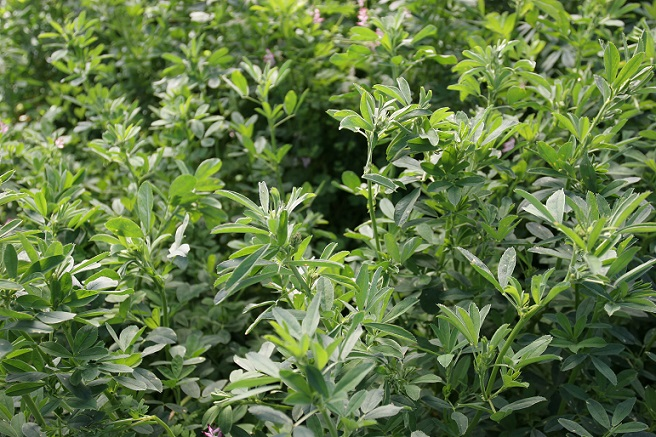