With increasing economic and environmental costs associated with fertilizer use, the need for low-input agroecological systems is on the rise. It is well documented that intercropping legumes can increase the supply of nutrients, through N2-fixation and P mobilization. Concurrently, the integration of trees in the agricultural landscape shows increasing evidence of nutrient inputs through efficient biogeochemical cycles. However, little is known about the effects shade has on legume-crop performance. This research aims to determine whether intercropping of the legumes soybean (Glycine max L. Merr.) and alfalfa (Medicago sativa) with wheat (Triticum turgidum durum) is beneficial for performance, particularly under shady conditions associated with tree-based intercropping. Test species were cultivated in hydroponics with a broad nutrient solution and steady state addition of N for 3 weeks. Individual plants were transferred to rhizoboxes with a 2 mm zone of soil for 16 days under (i) full sun or (ii) shade to mimic light levels at the tree-crop interface. Under monocropping, shading was found to significantly decrease wheat biomass. Intercropping wheat with alfalfa under full sun had no negative effect on growth but did increase wheat P uptake as compared to monocropped wheat. In contrast, intercropping wheat with soybean under full sun decreased wheat biomass, suggesting competition. However, under shade, this competitive effect was mitigated, as wheat exhibited similar biomass and higher N and P shoot concentration when associated with soybean as compared to monocropped wheat under lower light levels. This effect may be attributed to reduced biomass of soybean combined with higher soybean N2-fixation under shade. Legume-based intercrops may increase nutrient supply and growth but these beneficial effects will be dependent on matching species selection to light levels under tree-based intercropping. View Full-Text
Keywords: intercropping; 15N natural abundance; N2-fixation; Ontario; rhizobox; shade effects intercropping; 15N natural abundance; N2-fixation; Ontario; rhizobox; shade effects
►▼ Show Figures 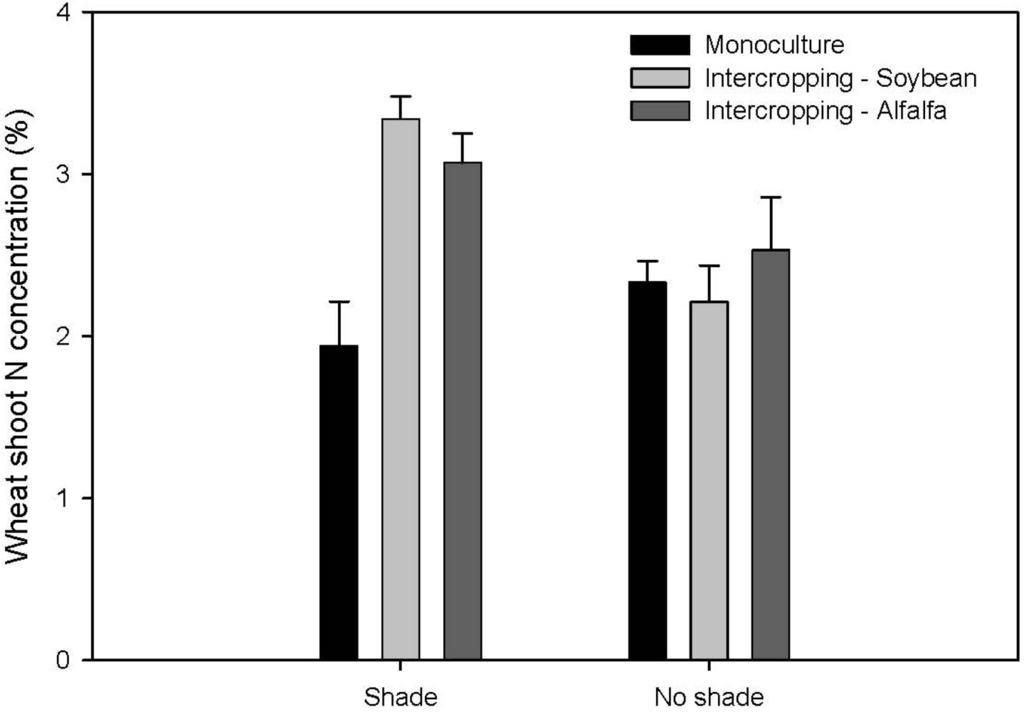