Zinc (Zn) is a key micronutrient affecting bio-functions of crops. Impacts of foliar application of three forms of Zn-containing agrichemicals on the physiology of rice seedlings and their uptake of heavy metal(loid)s and micronutrients from fully flooded paddy soils were investigated in a greenhouse study. Rice seedlings 45 days after germination were randomly exposed to an equivalent amount of 100 mg L−1 of zinc oxide nanoparticles (ZnONPs), zinc oxide bulk particles (ZnOBPs), and zinc salts (Zn2+) through foliar exposure. At termination, rice seedlings were divided into roots and shoots and the concerned metal contents in plant tissues were determined with an inductively coupled plasma mass spectrometry (ICP-MS). Our results demonstrated that all Zn agrichemicals displayed a similar effect on plant growth, but ZnONPs led to the greatest root exudate excretion and greatest inhibition in arsenic (As) uptake. Foliar application of ZnONPs resulted in 28% less As in rice shoots while Zn2+ only caused a 15% decrease in As accumulation in the same tissues. ZnOBPs had minimal impact on As concentration in rice shoots. ZnONPs also promoted iron (Fe) and copper (Cu) uptake in rice shoots, both of which are essential micronutrients for humans. The results suggest that foliar application of ZnONPs resulted in more favorable outcomes for plant growth and food safety than other two types of Zn. Overall, our results showed that application of nanoagrichemicals have important food safety and nutrition implications in addition to their agronomical roles and ZnONPs could be potentially used to alleviate As uptake and fortify Zn and other essential micronutrients in rice grains. View Full-Text
Keywords: Zinc oxide nanoparticles; rice; foliar application; arsenic; cadmium; micronutrients Zinc oxide nanoparticles; rice; foliar application; arsenic; cadmium; micronutrients
►▼ Show Figures 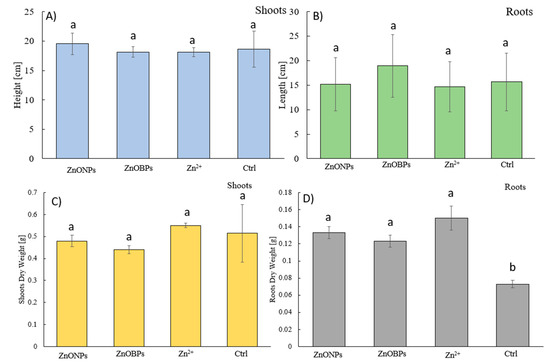