Soybean Yield Estimation and Its Components: A Linear Regression Approach

Soybean yield estimation is either based on yield monitors or agro-meteorological and satellite imagery data, but they present several limiting factors regarding on-farm decision level. Aware that machine learning approaches have been largely applied to estimate soybean yield and the availability of data regarding soybean yield and its components (number of grains (NG) and thousand grains weight (TGW)), there is an opportunity to study their relationships. The objective was to explore the relationships between soybean yield and its components, generate equations to estimate yield and evaluate its prediction accuracy. The training dataset was composed of soybean yield and its components’ data from 2010 to 2019. Linear regression models based on NG, TGW and yield were fitted on the training dataset and applied to a validation dataset composed of 58 on-field collected samples. It was found that globally TGW and NG presented weak (r = 0.50) and strong (r = 0.92) linear relationships with yield, respectively. In addition to that, applying the fitted models to the validation dataset, model based on NG presented the highest accuracy, coefficient of determination (R2) of 0.70, mean absolute error (MAE) of 639.99 kg ha−1 and root mean squared error (RMSE) of 726.67 kg ha−1.
Keywords: hundred grains weight; machine learning; number of grains; precision agriculture; thousand grains weight hundred grains weight; machine learning; number of grains; precision agriculture; thousand grains weight

Yield is a quantitative measurement of the crop and it is an important feature that can benefit decision makers by supporting and improving their crop management [1]. The common approach to estimate grain yield with higher spatial resolution providing farm level data is using harvesters coupled to yield monitors [2]. Yield is computed through the convergence of yield monitor flow, global navigation satellite system (GNSS) receiver and moisture sensor data [3]. Grain yield monitor estimation accuracy is affected by many factors such as: (i) mass flow sensor, (ii) cleanness of the system, (iii) wiring harnesses and (iv) moisture sensor. Hence, constant inspection of the sensor system and calibration is required before the start of harvesting to achieve higher accuracy rates and obtain reliable data of estimated yield [3].
Other approaches have also been developed to estimate grain yield, but they have a lower spatial resolution, limiting its application on a farm level. Among these approaches, the most common is the application of remote sensing techniques based on agro-meteorological [4] and satellite imagery data [5,6]. Regarding this kind of data, efforts have also been made applying advanced algorithms to estimate yield [7].
Worldwide, researchers are making efforts to apply machine learning (ML) techniques in different databases to estimate crop yield. Most of these databases are composed of spectral band/vegetation indices from crop canopies [8,9], chlorophyll index [9], fusion of chemical and physical soil properties, historical weather conditions and historical crop yield [10]. For example, Syngenta Crop Challenge [11] supplied a database with 2267 experimental corn hybrids planted in different locations across Canada and the United States between 2008 and 2016. Using that database to feed a deep learning neural network, the corn hybrid yield of 2017 was successfully predicted with a 12% root mean squared error compared to the average yield [12].
However, to support on-farm decision making, it is necessary to apply methods to gather higher spatial resolution data and the application of new sensor technologies and remote sensing techniques relying on the concepts of high-throughput phenotyping research could be suitable for this situation [3]. In this sense, some researchers have already applied ML techniques to analyze yield and its components. For example, Romero et al. [13] predicted durum wheat yield based on its plant height, peduncle length, spikelet number per ear, grain number per ear and grain weight per ear applying different ML decision trees. Aggelopoulou et al. [14] predicted apple tree yield based on its yield components, in their case, full bloom. The prediction was made by applying an image processing-based algorithm which learned texture patterns and correlated them to its yield.
Soybean yield components can be affected by several factors such: shading and temperature [15], genotype and environmental conditions [16], seed vigor [17] and seeding date, environment and cultivar [18]. Despite that, yield prediction through its components is becoming more popular in crops whose yield component is the product to be marketed, for example, mango [19] and rice [20], highlighting the possibility of applying it to soybean crops since the final product is grain.
Therefore, due to the ability to predict crop yield through its components (cotton [21] and rice [20]), large application of ML techniques in agriculture and soybean yield and its components’ data availability, there is an opportunity to investigate the possibility to forecast soybean yield based on its components in a global scale, unlike the common approach which relies on vegetation indices. In this sense, this paper aimed to (i) explore soybean yield and yield components’ relations from data published around the world, (ii) generate a global equation to estimate soybean yield and (iii) evaluate linear regressions prediction accuracy.

The training dataset was composed of published data from 2010 to 2019 that contained soybean yield and thousand grains weight (TGW) or hundred grains weight (HGW). In cases where HGW data was available instead of TGW, HGW values were multiplied by 10 to convert them to TGW. It was decided to use the training dataset relying on available data because it allowed the analysis of soybean yield and its components’ relations on a global perspective since the dataset came from different locations of study, treatments, soybean varieties and year of study.
Based on literature reviews [22,23], Equation (1) was used to estimate the number of soybean grains (grains m−2) because normally this data is not available and it is known that soybean yield (kg ha−1) is a function of the number of grains in a certain area (grains m−2) and the average weight per grain [22], in this case, it was adapted to thousand grains weight (g 1000 grains−1). where, NG is the number of grains (grains m−2) and TGW is the weight of a thousand grains (g 1000 grains−1).
A descriptive analysis (number of observations, minimum, median, mean and maximum values, standard deviation, sample variance and coefficient of variation) and scatterplot (yield versus country, yield versus TGW and yield versus NG) were applied to the training dataset to provide better data visualization and inference. In addition to the scatterplots, Pearson’s correlation (r) between soybean yield and its components was also calculated.
Linear regression models were used to predict yield because the number of observations was larger than the number of variables [24]. All yield observations, TGW and NG from the training dataset were used to fit three linear regression models: (A) Yield as function of TGW and NG, (B) yield as function of NG and (C) yield as function of TGW.
As linear regression allows formulation of the equation to predict the desired parameter, in our case, yield, it was also gathered from each model using the equation. Linear regression models generated from the training dataset were further applied to the validation dataset to predict soybean yield.
The validation dataset was composed of 58 randomly selected on-field samples of 1 m2 from a soybean field (cultivar TMG 7062) collected at Piracicaba, Brazil (22.7356° S, 47.6479° W) in March of 2019. Number of grains (grains m−2) was carefully and manually counted grain by grain, thousand grains weight (g 1000 grains−1) and yield (kg ha−1) were obtained from these samples after the drying process (105 °C for 72 h in a forced circulation air oven).
Overall performance of the fitted equations was evaluated by comparing their root mean squared error (RMSE), mean absolute error (MAE) and coefficient of determination (R2) for both the training and validation datasets. All the statistical analysis was performed in R environment [25].

In this work, considering the dataset used, it can be concluded that globally soybean yield presents a strong linear relationship with number of grains even for different varieties, countries and treatments and presents a weak linear relationship with thousand grains weight. It was possible to estimate soybean yield based on two equations, one dependent on thousand grains weight and number of grains (model A) and another dependent only on the number of grains (model B). Model B, yield as function of number of grains, applied to the validation dataset presented the best prediction accuracy compared to models A and C, highest R2 (0.70), lowest MAE (639.99 kg ha−1) and RMSE (726.67 kg ha−1).
Despite the suitability of fit of model B to predict soybean yield, it is worth noting that, currently, it is difficult and time-consuming to access NG data to use the proposed model. However, as the implementation of technology in agriculture advances, the proposed method corroborates towards the use and development of computer vision application to estimate crop yield, in this case, soybean yield.

The authors are grateful to CAPES and CNPq (process number: 130968/2019-6) for the scholarship support to M.W. (Masters student, University of Sao Paulo) and to Fundação de Estudos Agrários Luiz de Queiroz (FEALQ) for supporting the publication fee.

We thank Horst Bremer Neto that allowed us to collect the soybean samples on-field and Ricardo Chan for proofreading the English manuscript. 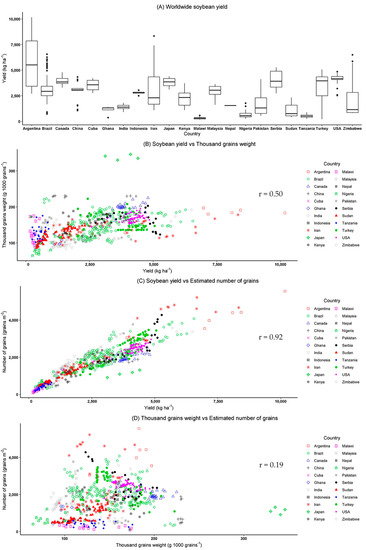