This article analyzes an olive oil mill formed of four conical stones used in the milling of the olive. To this end, a study of computer-aided engineering (CAE) was carried out using the parametric software Autodesk Inventor Professional, consisting of a static analysis using the finite-element method (FEM) of the three-dimensional (3D) model of the mill under real operating conditions. The results obtained revealed that the conical stones mill was a very robust machine. When studying the assembly in the most unfavorable situation (blockage of one of its millstones), we observed that the element with the highest von Mises stress was the bearing nut, reaching a value of 263.9 MPa, which was far from the elastic limit of cast iron (758 MPa). On the other hand, the machine hardly presented any equivalent deformations or displacements that could jeopardize the operation as a whole. The maximum displacement obtained was 2494 mm in the inertia flywheel, and the equivalent deformations did not reach 0.1% of the part dimension. Similarly, the element with the lowest safety coefficient (2.87) was the same bearing nut with the highest von Mises stress, although the next element with the second lowest safety coefficient had a value of 8.69, which showed that the set was clearly oversized. These results demonstrate the convenience of redesigning the set in order to resize some of its elements, and that they could have lower safety coefficients of between 2 and 4. After an initial analysis, the resizable elements would fundamentally be those related to the movement transmission system and the frame structure. View Full-Text
Keywords: olive oil; olive mill; conical stone; computer-aided engineering; finite-element analysis; industrial heritage; industrial archaeology olive oil; olive mill; conical stone; computer-aided engineering; finite-element analysis; industrial heritage; industrial archaeology
►▼ Show Figures 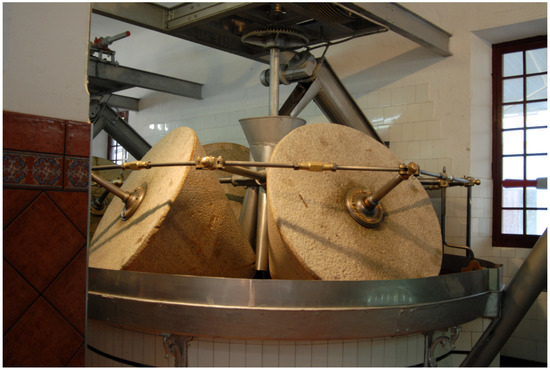