Four nitrogen rates (0, 90, 180, and 270 kg ha−1) were applied to the waterlogging-tolerant variety ZS 9 and the sensitive variety GH01. Seedlings with five leaves were waterlogged for 0 (control) or 10 days to investigate the effects of nitrogen on the quality of waterlogged rapeseed. Compared with controls, the seed oil content of waterlogged rapeseed increased slightly in GH01 and significantly in ZS 9 with nitrogen application, which can be explained by the following. (1) after waterlogging, the biomass distribution in roots and leaves of ZS 9 decreased, which alleviated physiological water shortage. Conversely, biomass distribution in roots of GH01 increased, which was not synchronized with the leaf biomass change. (2) After waterlogging at 90–270 kg N ha−1, the leaf number at bolting and flowering was increased in ZS 9 but decreased in GH01 compared with the control. The decrease in leaf area and SPAD value were greater for GH01 after waterlogging, which limited photosynthesis. (3) The leaf soluble protein at bolting was highest in ZS 9 and lowest in GH01. The sensitive variety showed poor growth. The inhibition of seed protein synthesis resulted in an increase in the oil content of waterlogged rapeseed with nitrogen. The seed oil of the waterlogging-tolerant variety was most significantly negatively correlated with leaf soluble protein content at the flowering stage, while the protein content showed the opposite correlation. The seed oil of the waterlogging-sensitive variety was most significantly negatively correlated with the number of leaves at the bolting and flowering stage, while the seed protein content had opposite correlations. View Full-Text
Keywords: rapeseed; waterlogging; nitrogen; quality; leaf characteristics rapeseed; waterlogging; nitrogen; quality; leaf characteristics
►▼ Show Figures 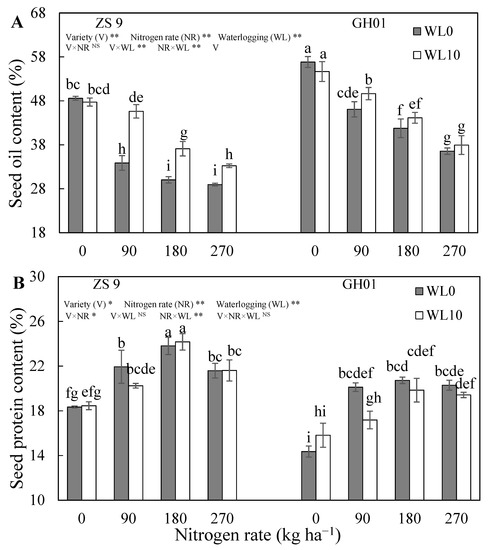