Sodium Hypochlorite Treatment: The Impact on Bacteria and Endotoxin Concentrations in Drinking Water Pipes of A Pig Nursery
Previous Article in Special Issue

Has Rural Migration Weakened Agricultural Cultivation? Evidence from the Mountains of Southwest China

Lettuce and cucumber are two important vegetables cultivated in greenhouses. Intercropping can increase the yield without increasing the demands for inputs. A more efficient use of resources in production systems can reduce costs and environmental impacts. We evaluated the land equivalent ratio (LER) of intercropping cucumber and lettuce as a function of the cucumber population. An experiment was conducted in a greenhouse to evaluate the cucumber population density (100, 85, 70, and 55% of 2.35 plants m−2) and two lettuce cultivars, ‘Lucy Brown’ and ‘Vanda’. The cucumber population density affected the amount of photosynthetically active radiation that reached the lettuce. The higher the density, the lower the total fresh mass and yield of the two lettuce cultivars. Fruit yield per plant and per area decreased and increased, respectively, as the density increased. LER was highest when cucumber was intercropped with ‘Vanda’ lettuce. LER increased with the density of ‘Vanda’ but decreased for ‘Lucy Brown’. ‘Lucy Brown’ produced commercial traits (head formation) only at the lowest density (55%). The presence of lettuce did not affect the cucumber yield per plant or per area. The intercropped system used land more efficiently than monocultured crops of lettuce and cucumber, with better results for ‘Vanda’ than ‘Lucy Brown’. View Full-Text
Keywords: Lactuca sativa L.; Cucumis sativus L.; photosynthetically active radiation; production system Lactuca sativa L.; Cucumis sativus L.; photosynthetically active radiation; production system
►▼ Show Figures 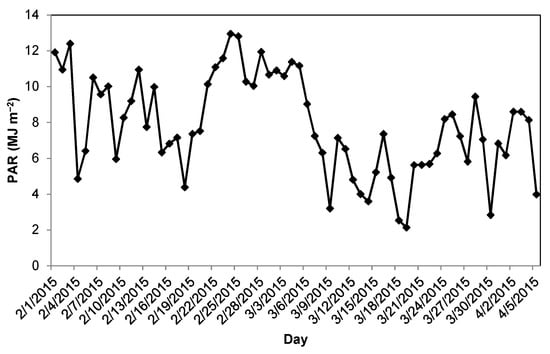