The Influence of Seed Viability on the Germination and In Vitro Multiple Shoot Regeneration of Soybean (Glycine max L.)

Soybean has been consumed in Asia traditionally as a staple food. Soybean can be a source of essential fatty acids—linoleic (18:2, ω-6) and α-linolenic acid (18:3, ω-3)—for humans. Intake of fatty acids with high ω-3 concentration or low ω-6/ω-3 ratios is more desirable for human health. However, in soybean, the unsaturated fatty acids are less stable than the saturated fatty acids in different environments. The objective of the present study is to expand the understanding of the environmental stability of elevated α-linolenic acid of soybean genotypes with alleles from wild soybean grown in three Asian countries. The results highlighted an environmental effect on the accumulation of 18:3, following the growth of soybean genotypes with elevated α-linolenic acid in eight environments. Particularly, temperature influenced the accumulation of 18:3 concentration. The soybean genotype, UT-385-4-4, produced the highest 18:3 concentration and is more stable than all the other soybean genotypes, excluding PT-100-3. UT-385-4-4 is a potential genetic resource to develop novel cultivars with high 18:3 concentration, which could be dietary sources of plant-derived ω-3 fatty acids. View Full-Text
Keywords: wild soybean; α-Linolenic acid; Omega-3; subtropical region wild soybean; α-Linolenic acid; Omega-3; subtropical region
►▼ Show Figures 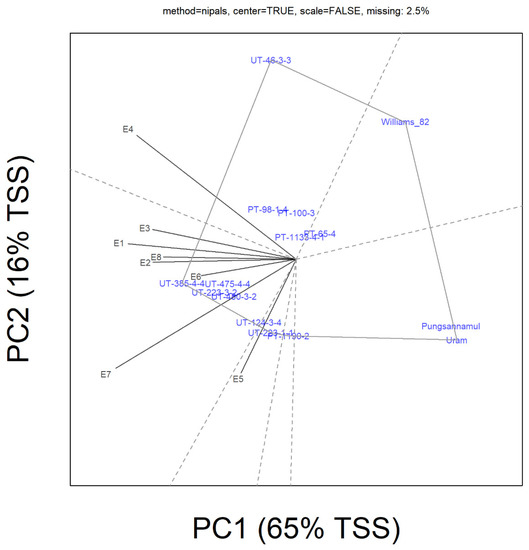