Role of Extracellular Vesicles in the Pathophysiology, Diagnosis and Tracking of Non-Alcoholic Fatty Liver Disease
Next Article in Special Issue

With rising numbers of bilateral mastectomies for the treatment of ductal carcinoma in situ (DCIS), and with better understanding of genetic predisposition to breast cancer, as well as significant advancements and aesthetic improvements in postmastectomy reconstruction, the need for bilateral autologous tissue breast reconstruction has increased further in the last decade [1,2,3].
In many cases of unilateral breast cancer or DCIS, particularly in patients with BRCA-1, and BRCA-2 mutations or strong positive cancer family history, a prophylactic bilateral mastectomy is recommended. Other scenarios include bilateral implant failure due to capsular fibrosis or cases of mastectomy due to local tumor relapse after a previous quadrantectomy plus radiotherapy. Microsurgical autologous breast reconstruction became a reliable workhorse in these scenarios and offers substantial and aesthetically natural results [4], as well as high patient satisfaction compared to reconstructions with silicone implants [5,6].
Various free flaps for autologous breast reconstructions are available and now represent routine procedures for breast reconstruction after skin-sparing or conventional mastectomy and breast conserving treatment. The deep inferior epigastric perforator (DIEP) flap became a gold standard [4] for breast reconstruction in patients with sufficient amounts of abdominal donor tissue [7]. In patients who do not offer enough abdominal donor tissue for reconstruction because of low body mass index or where the deep inferior epigastric vessels might have been damaged by prior abdominal surgeries, a vast number of alternative free flaps are available. With its low donor site morbidity and concealed scar, the transverse myocutaneous gracilis (TMG) flap is one of the many favored options for the reconstruction of small to medium sized breasts [8,9].
The opportunity to immediately restore like with like, and therefore, preventing the temporary distress of a mastectomy as well as the possibility to reduce the reconstructive process to as few surgeries as possible, increases the request for immediate reconstructions. For these accountable reasons, patients’ preferences are mainly towards immediate, ideally bilateral, breast reconstruction [5,10,11].
Although bilateral simultaneous breast reconstruction is well adapted, with double DIEP as well as with double TMG flaps [6], long operating time, increased blood loss, and doubled donor sites pose certain drawbacks.
The complexity and the risk profile of bilateral simultaneous microsurgical breast reconstructions with autologous tissue is high. To the authors knowledge, a large sized comparative study of both procedures has not been conducted so far. The authors aim was to directly compare and analyze the two immediate reconstructive methods (double DIEP vs. double TMG) in their patient population in respect to complications, and operative time, and the need for future refinement surgery such as autologous fat grafting.

A total of 119 patients, receiving 238 free flaps during the period of March 2010 and March 2019, were evaluated in the form of a double-center retrospective cohort study. Patients requiring bilateral breast reconstruction were recruited and treated either at the Department for Hand-, Micro- and Reconstructive Surgery at Marienhospital Stuttgart, Germany or at the Department for Plastic, Reconstructive and Aesthetic Surgery at the Hospital of the Brothers of St. John of God Salzburg, Austria. In total, 76 patients received a simultaneous bilateral breast reconstruction with double DIEP flaps, and 43 patients with double TMG flaps.
Patient characteristics, including age, BMI, comorbidities, form of breast disease, medication, gene mutation, smoking history, radiation therapy, were obtained from medical records. Complications were specifically assessed separately in detail and classified according to the following categories: vascular insufficiency, partial flap necrosis, total flap loss, late fat necrosis, donor site complication and erythrocyte concentrate substitution. Additionally, patients were screened for postoperative need of lipofilling for later breast symmetrization.
All subjects gave their informed consent for inclusion before they participated in the study and the study was conducted in accordance with the Declaration of Helsinki.

According to the most suitable donor site for each individual patient, either double DIEP flaps or double TMG flaps were chosen as the reconstructive method (Figure 1). All surgeries were conducted in a standardized two team approach, offering bilateral flap harvest together with simultaneous dissection of the recipient vessels and removal of breast tissue if indicated. The microvascular anastomosis of flap pedicle and recipient vessels was always performed under the microscope using the GEM Synovis Microvascular Anastomotic coupler device® for the venous and single interrupted sutures with 8.0 or 9.0 monofil non-resorbable nylon sutures for the arterial anastomosis. Postoperative protocols were also standardized as the same in each cohort and center. Both senior authors (Gottfried Wechselberger and Thomas Schoeller) have implemented identical pre-, intra- and postoperative protocols in each respective unit, thus, offering a large group of patients without compromising the dataset. Surgical steps for double DIEP reconstructions are shown in Figure 2A–C, and for double TMG reconstructions, in Figure 3A–C.

Data were checked for consistency in terms of typing errors, and ranges were inspected for validity. Crosstabulation tables were analyzed using Pearson’s Chi-squared statistical analysis and Fisher’s exact t-test. Independent Student’s t-tests were used to test means and corresponding 95% CI for difference of means were computed. Levene’s test was used to check for homogeneity of the groups. Relative risks for complication events were calculated. All statistical analyses in this report were performed by use of Social Science Statistics (www.socscistatistics.com).

None of the authors has a financial interest in any of the products, devices, or drugs mentioned in this manuscript. 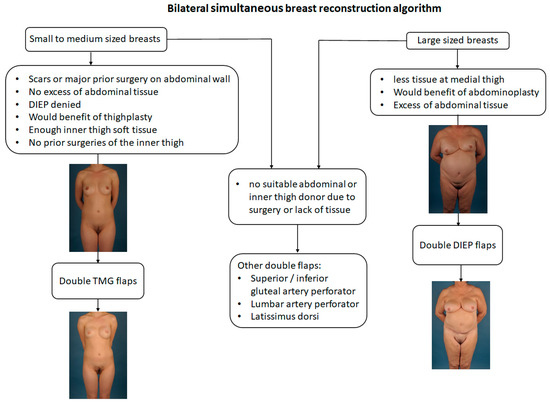 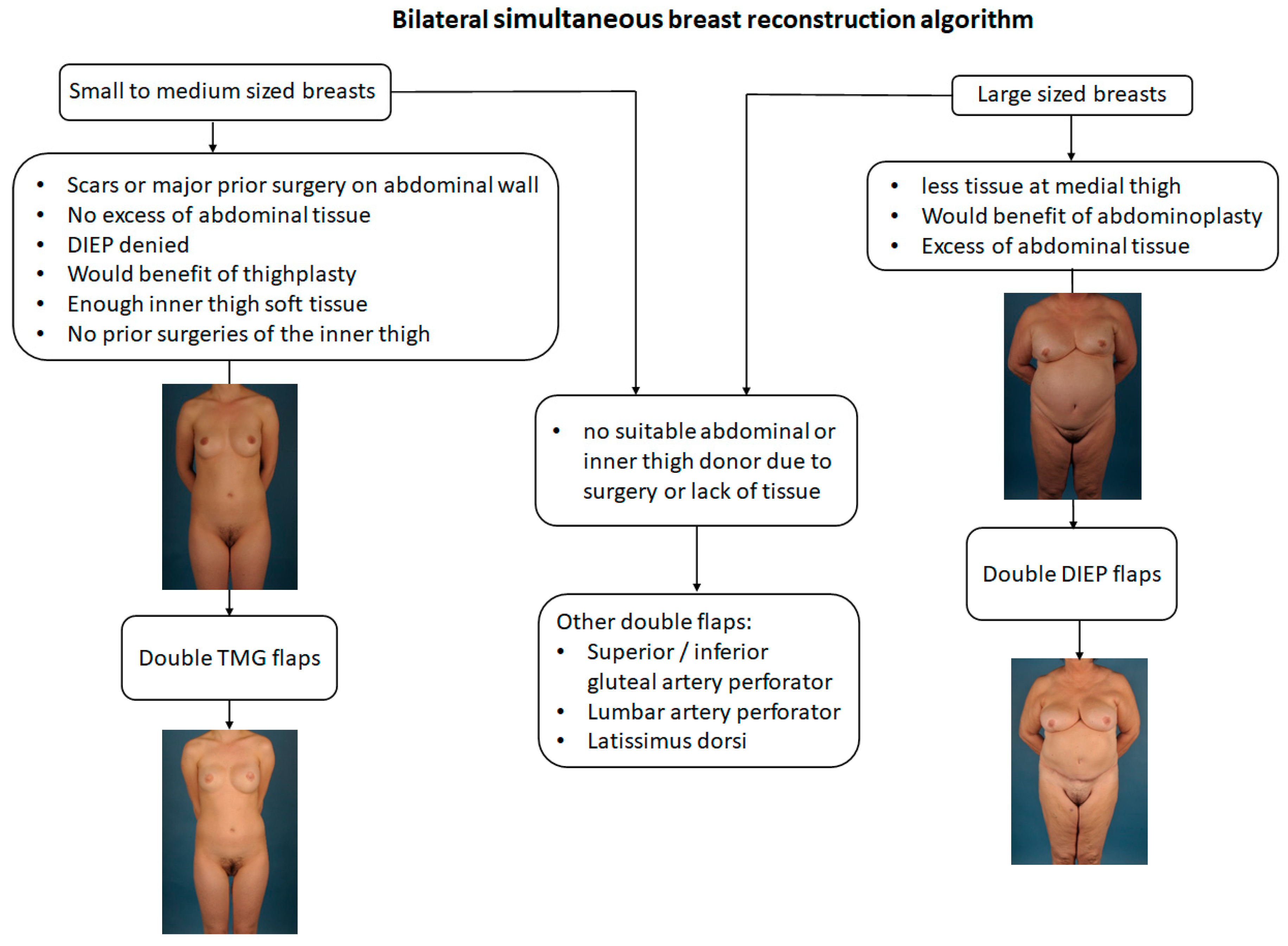 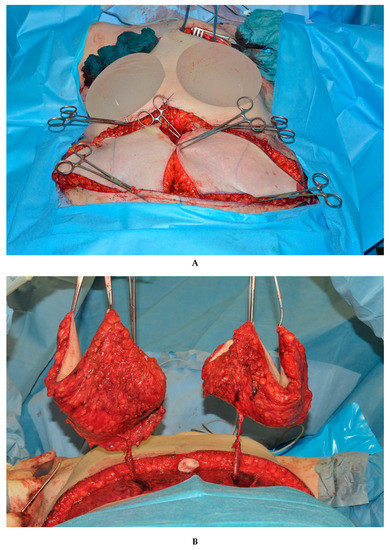 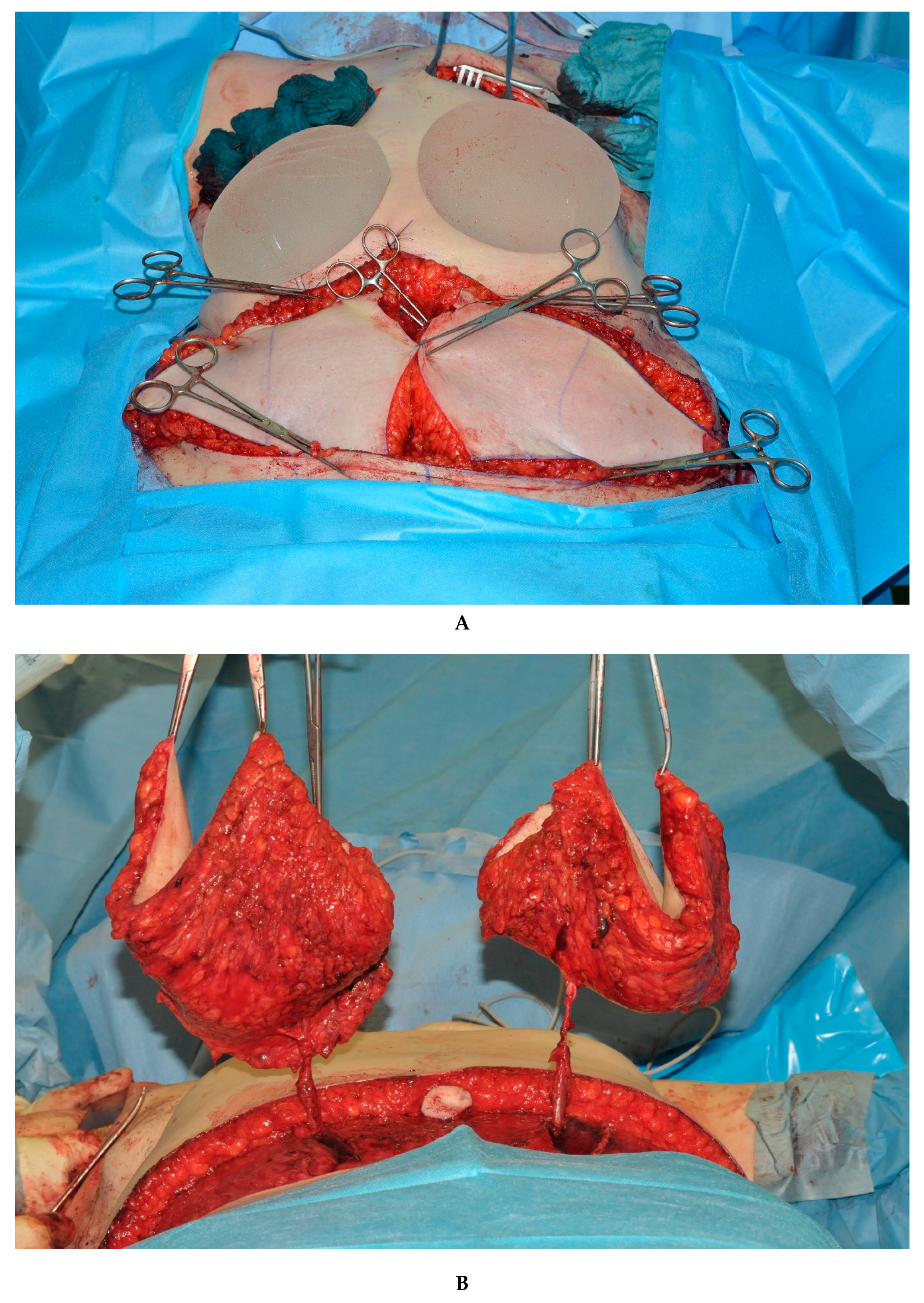 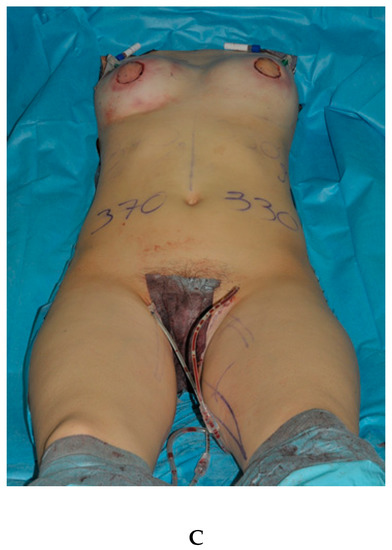 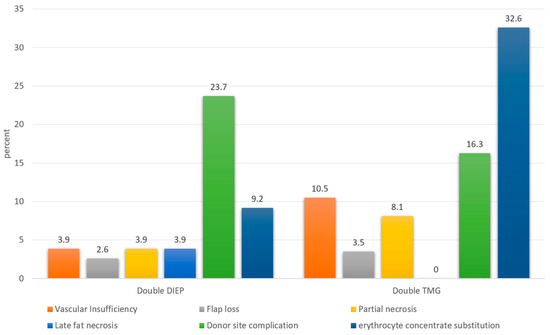 Table 4. Donor site morbidity in detail.
Table 4. Donor site morbidity in detail.
© 2020 by the authors. Licensee MDPI, Basel, Switzerland. This article is an open access article distributed under the terms and conditions of the Creative Commons Attribution (CC BY) license (http://creativecommons.org/licenses/by/4.0/).
We use cookies on our website to ensure you get the best experience. Read more about our cookies here.
Accept
We have just recently launched a new version of our website. Help us to further improve by taking part in this short 5 minute survey here. here.
Never show this again