The Cerebral Localization of Pain: Anatomical and Functional Considerations for Targeted Electrical Therapies
Next Article in Special Issue

Is There a Bidirectional Association between Polycystic Ovarian Syndrome and Periodontitis? A Systematic Review and Meta-analysis
Previous Article in Journal

A Randomized Trial of Deep Brain Stimulation to the Subcallosal Cingulate and Nucleus Accumbens in Patients with Treatment-Refractory, Chronic, and Severe Anorexia Nervosa: Initial Results at 6 Months of Follow Up
Previous Article in Special Issue

Both polycystic ovary syndrome (PCOS) and psoriasis are associated with insulin resistance and metabolic syndrome. Nonetheless, the incidence of psoriasis in patients with PCOS is unclear. We used the Longitudinal Health Insurance Research Database (LHID) in Taiwan from 2000 to 2012 to perform a retrospective population-based cohort study to elucidate the occurrence of psoriasis in PCOS patients. Patients with PCOS without psoriasis in the index year (the year of PCOS diagnosis) were recruited as the PCOS group. Those without PCOS nor psoriasis (control group) were selected using propensity score matching at a ratio of 4:1. Hazard ratios (HRs) were obtained using the Cox proportional hazards regression model. In total, 4707 and 18,828 patients were included in the PCOS and control groups, respectively. The incidence rates of psoriasis in the control and PCOS groups were 0.34 and 0.70 per 1000 person-years, respectively. The risk of psoriasis was higher in the PCOS group by an HR of 2.07 (95% confidence interval [CI] = 1.25–3.43) compared with the control group. In conclusion, the incidence of psoriasis in the PCOS group was higher than that in the control group. Further studies should be conducted to investigate the mechanism underlying the association, and to benefit the long-term management of patients with PCOS.
Keywords: polycystic ovary syndrome; psoriasis; metabolic syndrome; National Health Insurance Research Database polycystic ovary syndrome; psoriasis; metabolic syndrome; National Health Insurance Research Database

The National Health Insurance (NHI) program contains the medical records of almost the entire population of Taiwan. It was established in 1995 when the Taiwanese government launched the NHI program. In this study, we used the Longitudinal Health Insurance Database (LHID), which is a subset of the medical records in the NHI program; the LHID includes the data of 1,000,000 randomly selected insurants. The database has been validated in many studies [12,13,14]. The LHID also contains outpatient visit and hospitalization records as well as data on medication usage and treatment. Complying with ethical guidelines, all identifying data were encrypted. This study was approved by the International Review Board (IRB) of China Medical University and Hospital (IRB permit number: CMUH-104-REC2–115). The diseases in the LHID were coded according to the International Classification of Diseases, Ninth Revision, Clinical Modification (ICD-9-CM). The present analysis is presented according to the guideline of STROBE statement for reporting a cohort study (Supplementary Material S1: STROBE cohort checklist).

We selected patients to be the case and control groups from the LHID containing 1,000,000 Taiwanese medical records in NIH program by the following strategy. Patients diagnosed as having PCOS (ICD-9-CM code 256.4) between 2000 and 2012 were recruited as the case group in this cohort study. The disease was identified by the presence of at least three related outpatient diagnoses or at least one related inpatient diagnosis to ensure the validity of disease diagnosis. Women with a history of psoriasis (ICD-9-CM codes 696.0 and 696.1) prior to the diagnosis of PCOS were excluded. The control group included women free of PCOS and psoriasis matched to the participants of the PCOS group by age and index year through propensity score matching at the ratio of 1:4. The index date for patients with PCOS was defined as the date of PCOS diagnosis. We excluded participants younger than 14 years and those with psoriasis diagnosed prior to the index year.

The chi-square test was conducted to examine the differences in categorical variables between the control and PCOS groups. The statistical methods for PCOS and other diseases in NHID have been validated in previous reports [12,13,14]. The mean ages were compared using Student’s t-test. We obtained the cumulative incidence curve using the Kaplan–Meier method and assessed the difference between the groups using the log-rank test. Hazard ratios (HRs) were obtained using the Cox proportional hazards regression model. We also performed stratification analysis to elucidate the interaction between PCOS and comorbidities to investigate if it influences the incidence of psoriasis in the case and control groups. All statistical analyses were performed by using SAS version 9.4 (Version 9.4, SAS Institute Inc., Cary, NC, USA). The significance level for statistical analysis was set at p < 0.05.

We appreciate the donations in kind from Tseng-Lien Lin Foundation, Taichung, Taiwan. This manuscript was edited by Wallace Academic Editing. 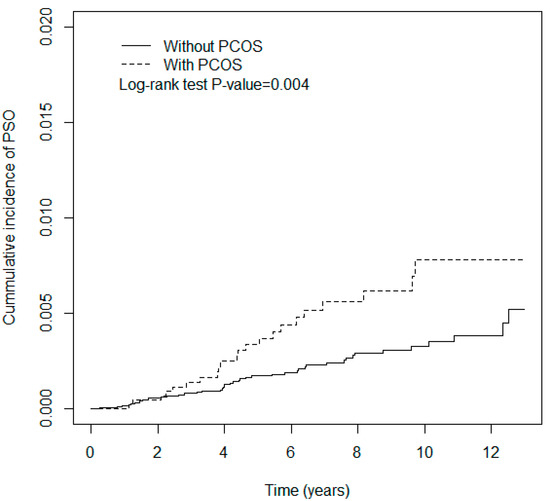 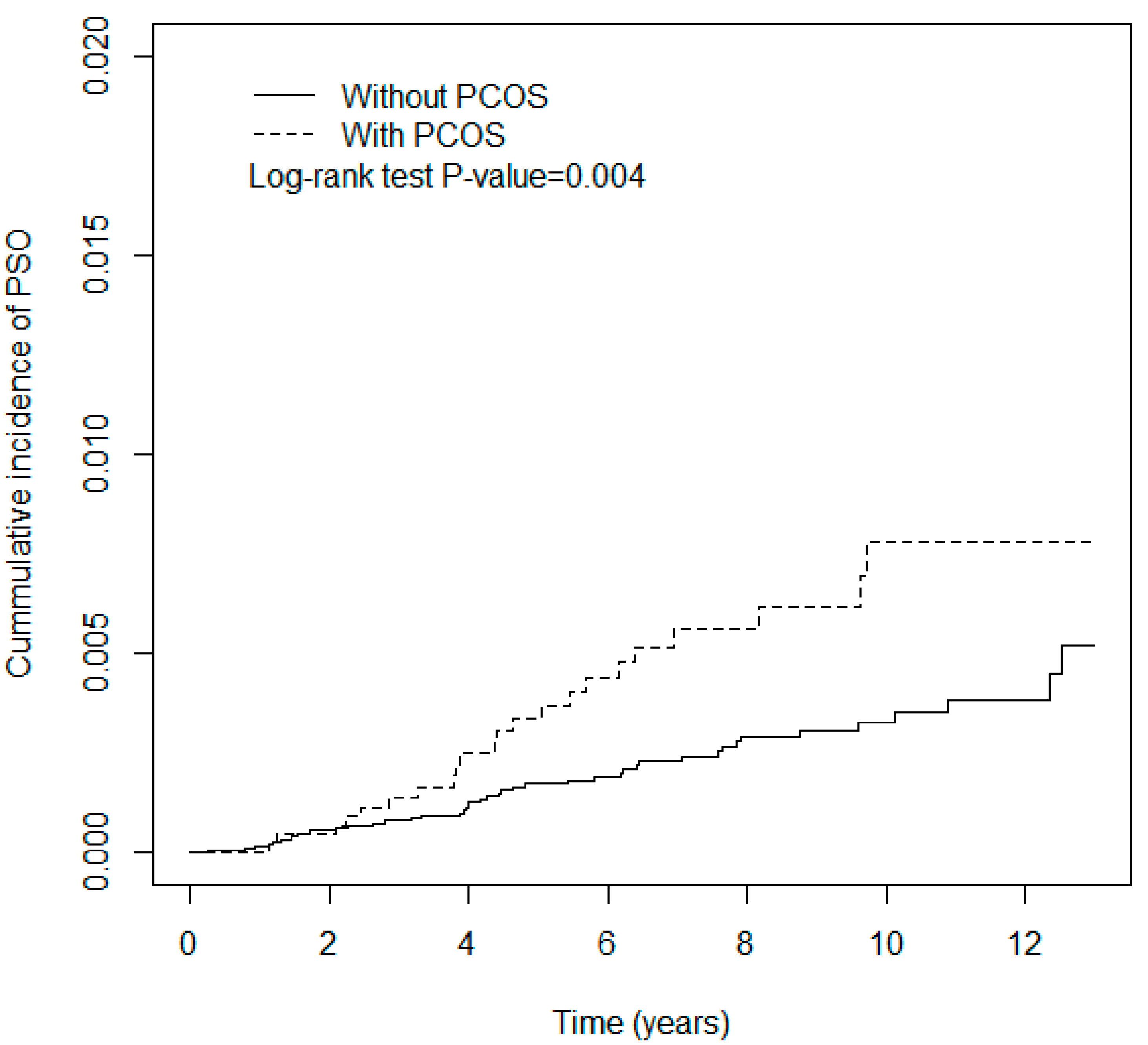