Accurate outcome prediction following transcatheter aortic valve implantation (TAVI) has gained further importance along with expanding its indication to patients with a lower surgical risk. Although previous studies have evaluated the prognostic impacts of gender and atrial fibrillation (AF) in TAVI patients, these two factors have rarely been addressed simultaneously. This retrospective observational study based on a multicenter TAVI registry involved 1088 patients who underwent TAVI between May, 2010 and February, 2020 at 3 hospitals in Japan. Participants were divided into 4 groups by gender and pre-existing AF, such as Female AF (−) (n = 559), Male AF (−) (n = 266), Female AF (+) (n = 187) and Male AF (+) (n = 76). Primary and secondary endpoints were death due to any and cardiovascular cause, and the composite of all-cause death and heart failure hospitalization, respectively. The median follow-up period was 538 days. Cumulative incidences of primary and secondary endpoints were lower in the Female AF (−) group compared to the other 3 groups. Adjusted multivariate Cox proportional hazard analyses showed an independent association of either or both of male gender and AF with adverse outcomes, when compared to the group with none of these (hazard ratios and 95% confidence intervals vs. Female AF (−) (reference) for all-cause death of Male AF (−): 2.7, 1.6–4.6, p < 0.001, Female AF (+): 3.5, 2.1–6.0, p < 0.001, and Male AF (+): 3.9, 1.9–7.8, p < 0.001), while there was no evidence of their synergistic prognostic impact. Male gender and being complicated by AF independently, but not synergistically, predicted poor long-term outcomes in patients undergoing TAVI. View Full-Text
Keywords: TAVI; long-term outcome; AF; gender difference TAVI; long-term outcome; AF; gender difference
►▼ Show Figures 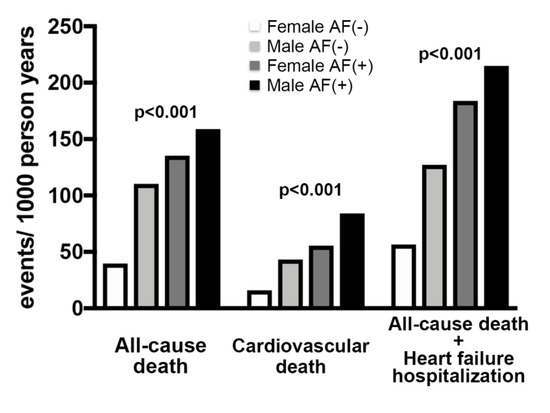