The Usefulness of Microencapsulated Sodium Butyrate Add-On Therapy in Maintaining Remission in Patients with Ulcerative Colitis: A Prospective Observational Study
Next Article in Special Issue

The Biomarker Potential of miRNAs in Myotonic Dystrophy Type I

:
MicroRNAs (miRNAs) are mostly known for their gene regulation properties, but they also play an important role in intercellular signaling. This means that they can be found in bodily fluids, giving them excellent biomarker potential. Myotonic Dystrophy type I (DM1) is the most frequent autosomal dominant muscle dystrophy in adults, with an estimated prevalence of 1:8000. DM1 symptoms include muscle weakness, myotonia, respiratory failure, cardiac conduction defects, cataracts, and endocrine disturbances. Patients display heterogeneity in both age of onset and disease manifestation. No treatment or cure currently exists for DM1, which shows the necessity for a biomarker that can predict disease progression, providing the opportunity to implement preventative measures before symptoms arise. In the past two decades, extensive research has been conducted in the miRNA expression profiles of DM1 patients and their biomarker potential. Here we review the current state of the field with a tissue-specific focus, given the multi-systemic nature of DM1 and the intracellular signaling role of miRNAs.
Keywords:
myotonic dystrophies; miRNAs; biomarkers; therapeutics

3. miRNAs in the Heart

Information on miRNA patterns in the heart of DM1 patients is scarce, most likely due to the difficulty of sample collection. To date, two papers have looked into the involvement of miRNAs in cardiac pathology in DM1 (Figure 1, Table 2). First of all, Rau et al. [55] showed in 2010 that miR-1 is downregulated in DM1 patients compared to controls, and that downstream targets of miR-1, the Voltage-dependent L-type calcium channel subunit alpha-1C (CACNA1C) and connexin 43 (GJA1), which are responsible for intracardiomyocyte conductance, are upregulated in heart samples of DM1 patients. The loss of miR-1 was due to MBNL1, which binds to the pre-miR-1, blocking the binding site for LIN-28 and subsequently disrupting the processing of pre-miR-1. The second study, performed by Kalsotra et al. [56], screened a DM1 mouse model for over 500 miRNAs and identified 54 differentially expressed miRNAs. To translate these findings to humans, 22 miRNAs were tested in heart tissue of eight DM1 samples and four controls. Twenty were significantly downregulated in human DM1 heart tissue, including two myo-miRs (miR-1 and miR-133a). Pathway analysis of the misregulated miRNAs revealed the loss of function of the myocyte enhancer factor-2 (Mef2) transcriptional network. In addition, several of the affected miRNAs found in the study have been previously described to produce arrhythmias or fibrotic changes. For example, miR-1, which was identified in both studies, is known to regulate gap junction proteins and cardiac channels, and a reduction in its expression greater than 50% may contribute to the conduction defects found in DM1 [55]. Two other downregulated miRNAs worth mentioning are miR-23a/b, of which postnatal upregulation has been shown to result in CELF1 downregulation [57]. Additionally, upon introduction of expanded CUG repeat RNA into a heart-specific and inducible DM1 mouse model, postnatal upregulation of miR-23a/b is reversed, and CELF1 is subsequently upregulated, proposing an additional mechanism for CELF1 upregulation in DM1.

4. miRNAs in Blood and Serum

The dysregulation patterns of miRNAs found in DM1 and their links to the clinical phenotype also show their potential as therapeutics. The search for a therapeutic, targeting miRNAs in DM1, has focused mainly on miRNAs associated with the two splice factors involved in DM1 pathology, namely MBNL1 and CELF1 (Figure 2).
Four different miRNAs (miR-1, miR-30-5p, miR-23b, and miR-218) associated with the splice factor MBNL1 have been studied as therapeutic targets. As previously mentioned, pre-miR-1 processing is regulated by MBNL1. Sequestration of MBNL1 by toxic RNA results in downregulation of miR-1 and subsequent upregulation of downstream targets of miR-1. This, in turn, is linked to several DM1 symptoms, for example, one of the miR-1 targets is CACNA1C, which encodes for calcium channels in the heart. Misregulation may contribute to arrhythmias observed in DM1 patients [55]. However, no steps toward upregulating miR-1 to assess its therapeutic potential have been taken. miR-30-5p is another miRNA associated with the MBNL1 family, since it is a direct repressor of MBNL1-3 translation. A study showed that introducing a miR-30-5p mimic into C2C12 muscle cells downregulated the expression of MBNL and deregulated downstream targets of MBNL, including Trim55 (involved in sarcomere assembly) and Insulin Receptor (binding of insulin to the receptor initiates a downstream pathway that regulates muscle development) [69]. This shows an interesting possibility of using anti-miRs to repress miR-30-5p expression, increase MBNL protein levels, and alleviate associated DM1 symptoms. The last two miRNAs linked to MBNL1 were found by Cerro-Herreros et al. in 2018 [70]. miR-23b and miR-218 were identified as repressors of MBNL1 translation. Anti-miR treatment of each miRNA independently in DM1 myoblasts and DM1 mice increased MBNL1 levels, and in the latter this was linked to improvements in spliceopathy profile, histopathological signs, and functional myotonia without toxicity [70]. More recently, the same group has conducted a more in-depth study on the therapeutic potential of an anti-miR against miR-23b. They showed that the therapeutic effect is dose-dependent and has long-lasting effects. Subcutaneous administration of anti-miR 23b in human skeletal actin long repeat mice upregulated the expression of MBNL1 and rescued splicing alterations, grip strength, and myotonia [71].
For the splice factor CELF1, the focus has been primarily on miR-206, which may modulate CELF1 overexpression. The introduction of miR-206 mimics into cells overexpressing CEFL1 inhibited CELF1 expression and improved the myoblast fusion index and myotube area [72]. Another pair of miRNAs of note are miR-23a/b; they have shown to be downregulated by introducing expanded repeats, which leads to the upregulation of CELF1. This is another potential therapeutic ability worth exploring [56].
A recent study has discovered a new potential therapeutic target, namely miR-7. miR-7 was previously described to be downregulated in a DM1 Drosophila model and in muscle biopsies from patients [52]. In the current study, overexpression of miR-7 resulted in the rescue of DM1 myoblast fusion defects and myotube growth by repressing autophagy and the ubiquitin-proteasome system [73]. This improvement was independent of MBNL1. These results provide evidence for a new therapeutic candidate for muscle dysfunction in DM1.

miRNAs have great potential to become diagnostic tools in several diseases, including cancer, neurodegenerative diseases, and neuromuscular diseases. However, to date, insufficient knowledge and a lack of conclusive results to clarify the role of miRNA in disease diagnosis have held back the implementation of miRNA biomarkers in clinical settings [4]. In the past two decades, extensive research has been conducted in the miRNA expression profiles of DM1 patients and their biomarker potential. Several expression profiles have been found to be able to distinguish between DM1 patients and healthy subjects, and even a link has been made between progressive and non-progressive muscle wasting in DM1 patients. However, discrepancy between studies still exists. One of the main causes of the discrepancies seems to be the normalization process necessary for qPCR, for which no gold standard exists. A way around this might be the use of a fairly novel technique, the digital droplet PCR, which produces an absolute quantity, eliminating the need for normalization [74]. This will help in the comparability of results between groups. Further research, especially longitudinal studies, are needed to unravel the true biomarker potential of miRNAs in DM1 to see whether they can help in the prediction of disease progression and/or in the prediction of treatment efficacy. 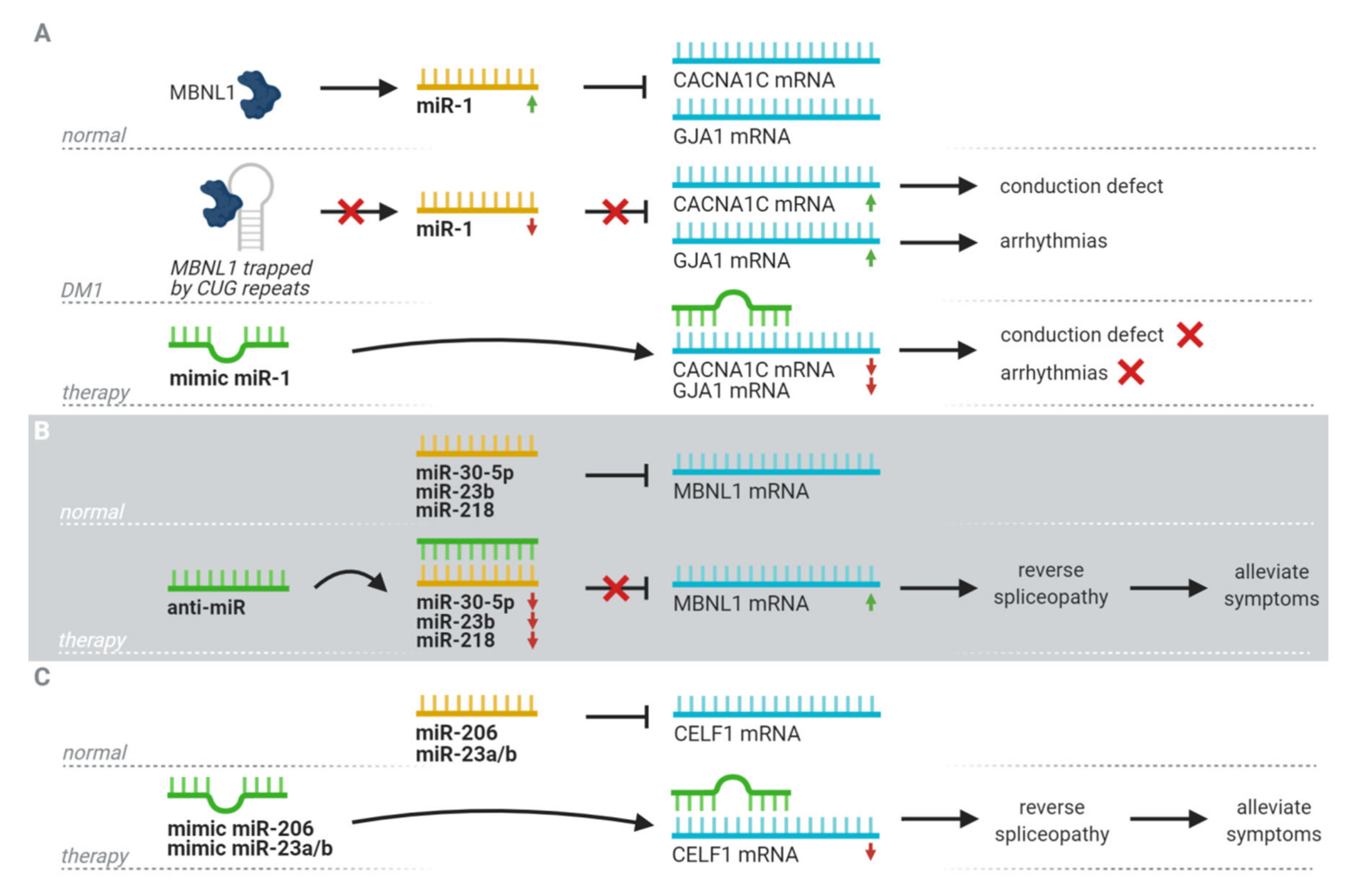