Design, Characterization, and Evaluation of scFvCD133/rGelonin: A CD133-Targeting Recombinant Immunotoxin for Use in Combination with Photochemical Internalization

Purpose: To evaluate the efficacy of short-term low-dose quetiapine for delirium prevention in critically ill patients. Methods: In this prospective, a single-center, randomized, double-blind, placebo-controlled trial, adult patients who were admitted from July 2015 to July 2017 to a medical intensive care unit (ICU) of a tertiary teaching hospital affiliated to Seoul National University were included. Quetiapine (12.5 mg or 25 mg oral at night; N = 16) or placebo (N = 21) was administered according to randomization until ICU discharge or the 10th ICU day. The primary endpoint was the incidence of delirium within the first 10 ICU days. Secondary endpoints included the rate of positive Confusion Assessment Method for the ICU (CAM-ICU) (the number of positive CAM-ICU counts/the number of total CAM-ICU counts), delirium duration, successful extubation, and overall mortality. Result: The incidence of delirium during the 10 days after ICU admission was 46.7% (7/15) in the quetiapine group and 55.0% (11/20) in the placebo group (p = 0.442). In the quetiapine group, the rate of positive CAM-ICU was significantly lower than in the placebo group (14.4% vs. 37.4%, p = 0.048), delirium duration during the study period was significantly shorter (0.28 day vs. 1.83 days, p = 0.018), and more patients in the quetiapine than in the placebo group were weaned from mechanical ventilation successfully (84.6% vs. 47.1%, p = 0.040). Conclusions: Our study suggests that prophylactic use of low-dose quetiapine could be helpful for preventing delirium in critically ill patients. A further large-scale prospective study is needed.
Keywords: delirium; prevention; quetiapine; medical intensive care unit; extubation delirium; prevention; quetiapine; medical intensive care unit; extubation

Delirium is defined as a serious disturbance of cognition and consciousness by medical illnesses or neurologic causes by DSM-V criteria [1,2,3] and occurs in up to 30–80% of patients in the intensive care unit (ICU) [4,5,6,7]. The clinical presentation of delirium is often characterized by acute onset, an altered level of consciousness, a fluctuating course, and a global impairment of cognitive functioning. The development of delirium leads to a longer duration of an ICU or hospital stay and to increased mortality [4,8,9]. In terms of survival after hospital discharge, delirium is also known as a major risk factor for long-term sequelae, such as cognitive impairment and physical disability [10,11,12].
Clinical practice guidelines for pain, agitation, and delirium were published in 2018, and emphasize that the use of delirium assessment tools to monitor ICU patients can improve treatment effects due to a more rapid delirium detection and treatment [13]. According to 2018 guidelines [13], pharmacologic delirium prophylaxis was not recommended in adult ICU patients due to the lack of supporting clinical data regarding reduced delirium incidence or prevalence. However, since the guidelines have been published, studies on the pharmacologic prevention of delirium in ICU patients have been reported. In these reports, haloperidol [14,15,16,17,18] has been studied most frequently, and RCTs using rivastigmine [19], risperidone [20], and dexmedetomidine [21,22] have also been published.
Quetiapine is an atypical antipsychotic that is generally used to manage neuropsychiatric diseases such as depression or schizophrenia [23]. One prospective study showed the treatment efficacy of quetiapine for ICU delirium; quetiapine reduced the time to the first resolution of delirium (1.0-day vs. 4.5 days, p = 0.001) and the duration of delirium (1.5 days vs. 5 days, p = 0.006) in the study versus control group [24]. However, no study has yet been conducted to determine whether prophylactic use of quetiapine can prevent delirium in ICU patients. Therefore, we aimed to evaluate the efficacy of low-dose quetiapine for preventing delirium in critically ill patients.

A prospective, randomized, double-blind, placebo-controlled study was conducted in a medical intensive care unit (MICU) of Seoul National University Bundang Hospital (SNUBH) from July 2015 to July 2017. This study was conducted in accordance with the amended Declaration of Helsinki. The Institutional Review Board (IRB) of SNUBH approved the study protocol, and all enrolled patients or their caregivers gave written informed consent before the randomization (IRB no.: B-1404-247-009). In response to our investigational drug application for this investigator-initiated trial, the Korea Food and Drug Administration approved the trial. Trial Registration: The trial was registered online before recruitment started (NCT02297763). Registered 1 July 2015, https://clinicaltrials.gov/ct2/show/NCT02297763?term=NCT02297763&rank=1.

During the study period, adult patients admitted to the MICU were screened for eligibility. They were eligible for the study when three or more of the following inclusion criteria were met and none of the exclusion criteria were applicable. The inclusion criteria were as follows: age over 64 years, acute physiology and chronic health evaluation II (APACHE-II) score over 14 points, suspicion of infection, intubation and mechanical ventilation, receiving continuous renal replacement therapy, ongoing metabolic acidosis, use of morphine or sedatives, unexpected ICU admission, and non-sustained coma (drug-related and others).
We excluded patients from enrolment for the following reasons: age less than 18 years old, current pregnancy, delirious at the time of ICU admission (initial CAM-ICU (the Confusion Assessment Method-ICU) positive), could not communicate within 3 months of ICU admission due to previously diagnosed irreversible neurologic disease (stroke, cerebral hemorrhage, traumatic brain injury, recent brain surgery, severe dementia, etc.), acute neurologic disease or injury at ICU admission, hepatic encephalopathy or liver cirrhosis with a Child-Pugh score B or C, ongoing outpatient or inpatient anti-psychotic drug use, high risk for ventricular arrhythmias (ongoing treatment with drugs known to prolong the QT interval (e.g., erythromycin, class Ia, Ic, III anti-arrhythmic drugs), high risk for drug interaction with quetiapine (phenytoin, carbamazepine, barbiturates, proteinase inhibitors, nefazodone), use of central nervous system inhibitory drugs barbiturates), epinephrine, severe bradycardia, hematologic malignancy, suspected death within 72 h of ICU admission, and refusal of informed consent.

After informed consent, patients were randomized to either placebo or quetiapine group within 72 h of ICU admission. Randomization was performed by the hospital pharmacist using the randomization table made by a biostatistician in the Medical Research Collaborating Center of the hospital. Without the pharmacist, neither study personnel nor patients were aware of the treatment group assignment.

After randomization, patients received one of the two study drugs: 12.5 mg or 25 mg quetiapine (as a solution of 10 mL), or placebo (same amount of starch powder as a solution of 10 mL) (Figure 1). Quetiapine administration (by mouth; par os) was started at 12.5 mg and could be increased up to 25 mg at 24-h intervals if there were no adverse reactions. We used 25 mg quetiapine tablets as the study drug. To apply 12.5 mg, a quetiapine 25 mg tablet was crushed, and the powder was dissolved in sterilized distilled water to make a 20 mL solution. Half of this volume was then used as a 12.5 mg quetiapine/10 mL solution. To administer 25 mg, the powder of a 25 mg quetiapine tablet was dissolved in sterilized distilled water to prepare a 10 mL solution (25 mg quetiapine/10 mL solution). For placebo, the same amount of starch powder was dissolved in sterilized distilled water to produce 10 mL of the placebo solution. Both quetiapine and placebo were provided in identical vials and wrapped in a white label to conceal the contents. Thus, the entire study team, enrolled patients, and clinicians were blinded during the study procedure. The study drug was delivered by the study nurse from the hospital pharmacy to the ICU, and it was administered by mouth or via a nasogastric tube at night, once every 24 h. During the study period, enrolled patients were examined three times per day for signs of delirium using the CAM-ICU. According to the ICU guidelines of SNUBH, other sedatives (dexmedetomidine, midazolam), pain killers (fentanyl, remifentanil), or delirium treating drugs (haloperidol, lorazepam, other atypical anti-psychotics that were not quetiapine) were administered when indicated. During the course of the study, the study nurse examined the patients for possible adverse events (QT prolongation, hypotension, bradycardia, elevated liver enzymes, extrapyramidal symptoms, etc.) related to the drug administration.

The primary predefined outcome was delirium incidence diagnosed with the CAM-ICU within the study period. If the CAM-ICU was positive at least once during the study period, it was recorded that a delirium occurred. Secondary outcomes were the rate of positive CAM-ICU (the number of positive CAM-ICU counts/the number of total CAM-ICU counts), the duration of delirium within the 10th ICU day or ICU discharge day (in cases when ICU discharge occurred before the 10th ICU day), the length of stay in the ICU, the length of stay in the hospital, the duration of intubation, a successful extubation, the ICU mortality, the overall mortality, and the use of rescue medication.

To determine the effectiveness of quetiapine for ICU delirium prevention, we used the chi-square test, a two-tailed test with delirium incidence and baseline characteristics with an 80% power and a 5% significance level between two groups. Based on a preliminary test in 2012 at SNUBH, the delirium incidence at the MICU was about 75%. Additionally, other trials of delirium prevention have shown a 7–20% delirium decrease with haloperidol or risperidone prophylaxis [13,14,19]. We aimed for a 20% difference between the study and placebo groups and took a 10% drop-out rate into consideration; we, therefore, calculated that at least 97 patients would be required in each group.
Data were analyzed using SPSS software for Windows, version 22.0 (IBM Corp., Armonk, NY, USA). The participants’ clinical variables were analyzed using descriptive statistics. The results are expressed as mean and standard deviation. Variables were compared between the study and control groups. Categorical variables were compared by chi-square analysis and continuous variables were compared using Student’s t-test or the Mann–Whitney test. ICU delirium incidence, successful extubation, ICU mortality, and in-hospital mortality were shown as a forest plot. For all analyses, p values < 0.05 were considered significant.

During the intervention period (from July 2015 to July 2017), 205 patients were screened and 37 fulfilled the inclusion criteria (Online supplement, Figure 2). After the inclusion of 37 patients, the recruitment period was ended early because the study drug was close to the expiration date. Of the 37 patients, 16 patients were assigned to the quetiapine group and 21 received placebos. After one patient dropped out from both groups, 15 patients were included in the study group and 20 in the control group. Between the placebo group and the study group, there were no significant differences in baseline characteristics (Table 1).

Our study suggests that prophylactic use of low-dose quetiapine could be helpful for the prevention of delirium in critically ill patients. Although the incidence of ICU delirium did not decrease, patients treated with quetiapine in this study experienced less fluctuation of symptoms, shorter durations of delirium, and a higher success rate of being weaned from mechanical ventilation. To support these beneficial effects of quetiapine through additional evidence, a large-scale prospective study is needed.

This work was supported by grant no 06-2015-003 from the SNUBH Research Fund. Il-dong Pharmaceutical Company provided test drugs (quetiapine), did not participate in the research process or in analysis or presentation of the study results in any way.

We thank the patients and family members for participating, the clinical staff for excellent protocol compliance, and the research assistants for data entry. 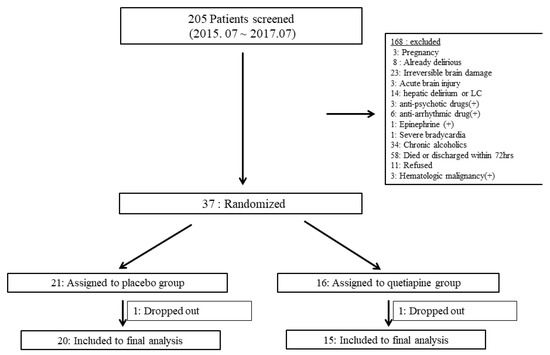 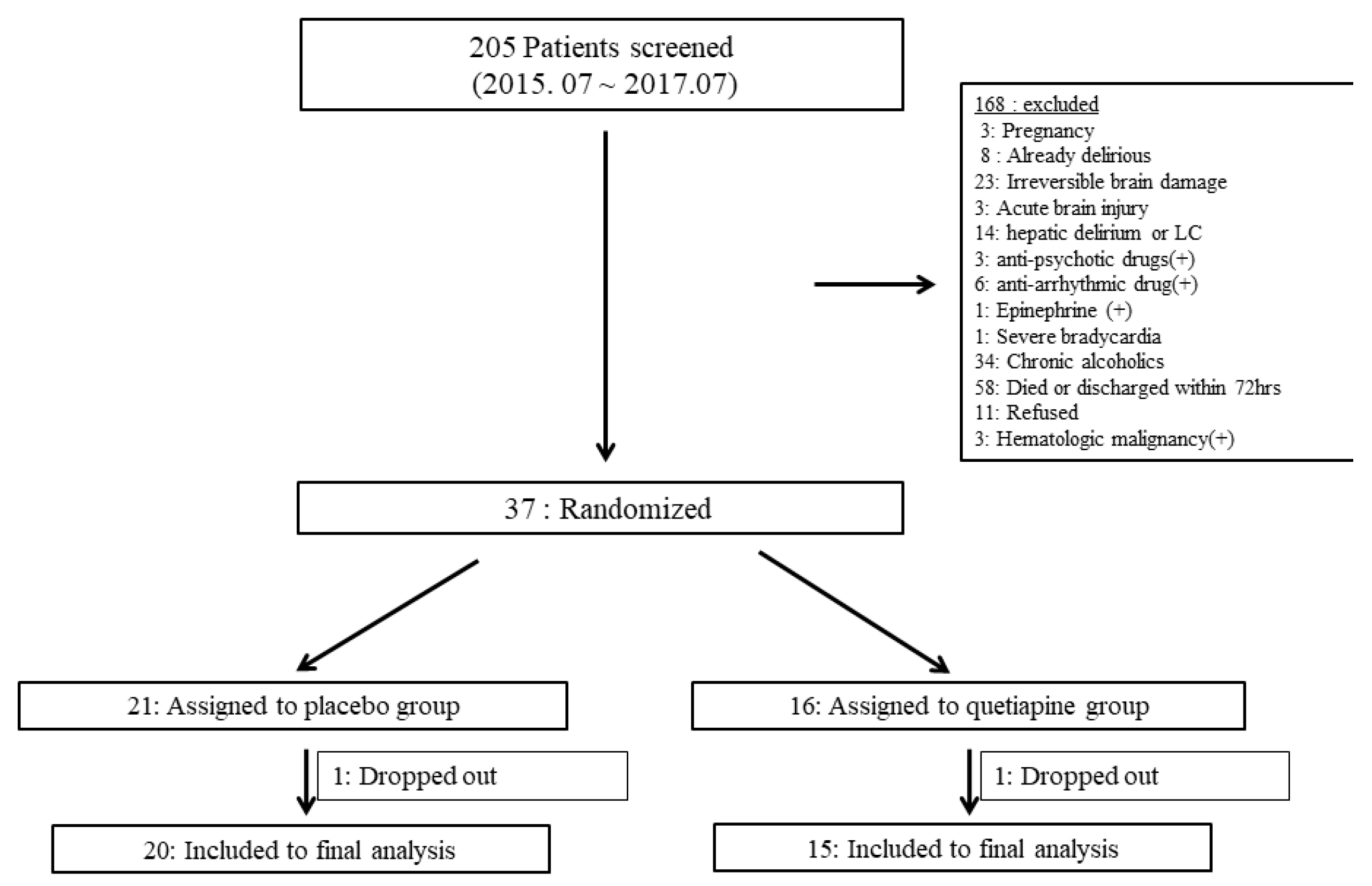 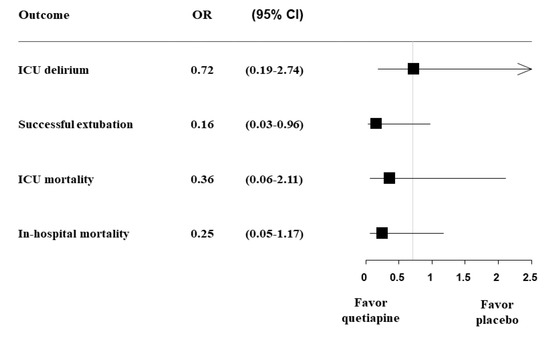 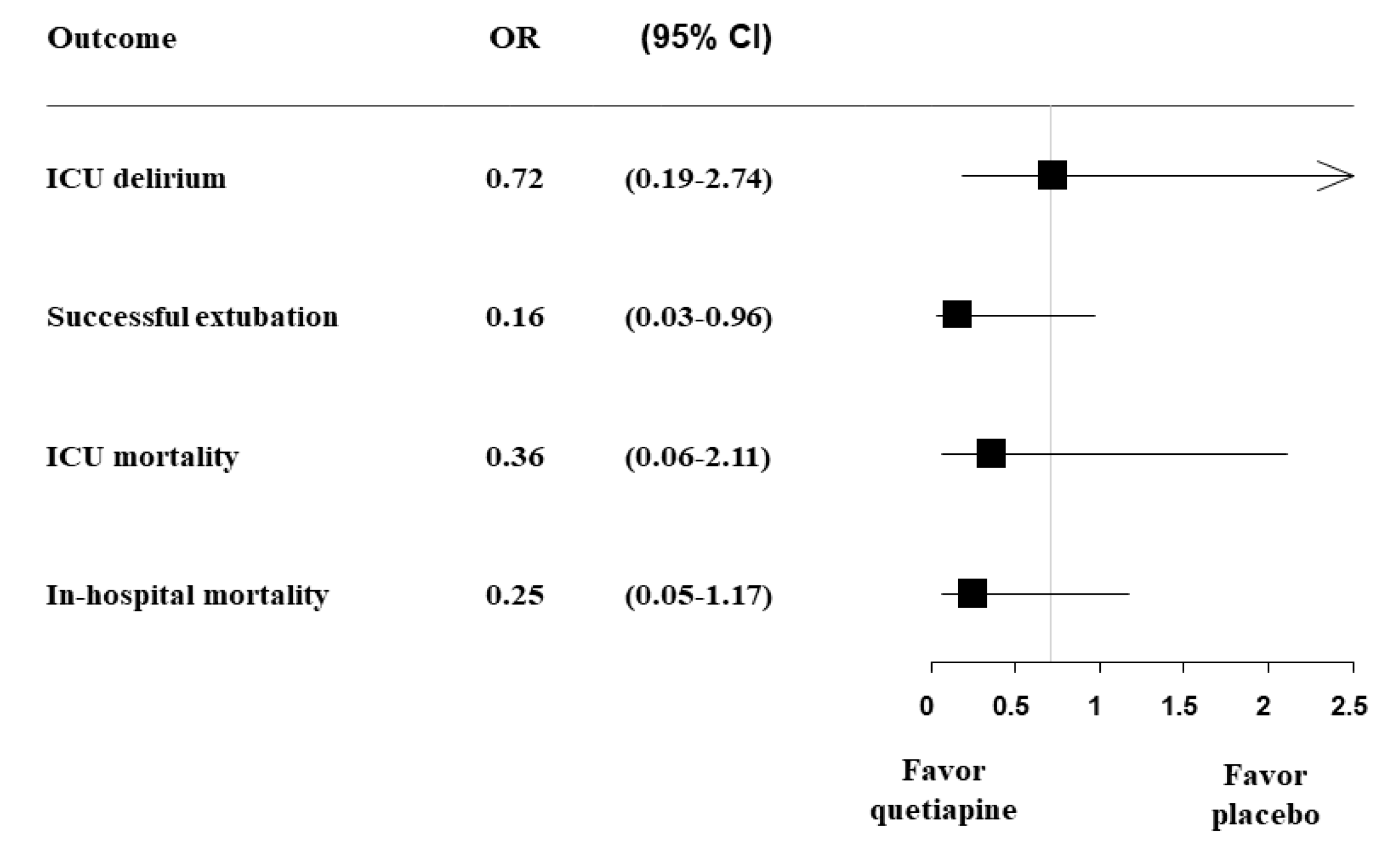