Correlation between Choriocapillaris Density and Retinal Sensitivity in Stargardt Disease

Characterization of Bacteria and Inducible Phages in an Intensive Care Unit

Intensive care units (ICUs) are critical locations for the transmission of pathogenic and opportunistic microorganisms. Bacteria may develop a synergistic relationship with bacteriophages and more effectively resist various stresses, enabling them to persist despite disinfection and antimicrobial treatment. We collected 77 environmental samples from the surroundings of 12 patients with infection/colonizations by Escherichia coli, Staphylococcus aureus or Klebsiella spp. in an ICU in Austria. Surface swabs were tested for lytic phages and bacterial isolates for mitomycin C-inducible prophages. No lytic bacteriophages were detected, but S. aureus was isolated from the surroundings of all patients. About 85% of the colonies isolated from surface samples were resistant to antimicrobials, with 94% of them multidrug resistant. Two inducible temperate bacteriophages—myovirus vB_EcoM_P5 and siphovirus vB_SauS_P9—were recovered from two clinical isolates. Staphylococci phage vB_SauS_P9 lysed S. aureus isolates from the surface swabs collected from the surroundings of three patients. No transductants were obtained on propagation in phage-sensitive antimicrobial-resistant isolates. The two phages were sensitive to 0.25% (v/v) of the disinfectant TPH Protect, which eliminated viable phages after 15 min. Coliphage vB_EcoM_P5 was inactivated at 70 °C and staphylococci phage vB_SauS_P9 at 60 °C after 60 min. View Full-Text
Keywords: bacteriophages; Staphylococcus aureus; Escherichia coli; intensive care unit; prophage induction bacteriophages; Staphylococcus aureus; Escherichia coli; intensive care unit; prophage induction
►▼ Show Figures 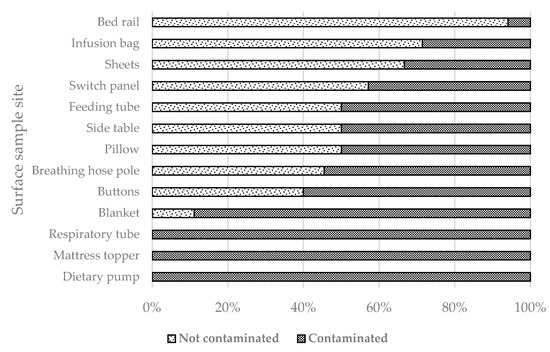