Exosomal miRNAs in Lung Diseases: From Biologic Function to Therapeutic Targets
Next Article in Special Issue

Background and objectives: Sleep bruxism is a common phenomenon that can affect approximately 13% of adult population. It is estimated that bruxism can be caused by three types of factors: biological, psychological, and exogenous. There are many scientific reports about the coexistence of bruxism, stress, and psychoemotional disorders. The aim of this study is to evaluate the possible correlation between occurrence of sleep bruxism and perceived stress and depressive symptoms. Material and methods: The material of this study consisted of 77 patients of Clinic of Prosthetic Dentistry operating at the Department of Prosthetic Dentistry, Wroclaw Medical University, Poland in which after using guidelines of the American Academy of Sleep Medicine probable sleep bruxism was fund. Patients then underwent video-polysomnography. Exposure to perceived stress was evaluated with Perceived Stress Scale-10 (PSS-10). Occurrence of depressive symptoms was evaluated with Beck’s Depression Inventory (BDI). Results: The analysis showed lack of statistically significant correlation between Bruxism Episodes Index (BEI) and Perceived Stress Scale–10 and Beck’s Depression Inventory scores (p = 0.64, p = 0.65; respectively), also when comparing study group (bruxers) and control group (non-bruxers) (p = 0.88, p = 0.77; respectively). Conclusion: Intensity of sleep bruxism was not statistically significantly correlated with self-reported perceived stress and depression. This issue requires further research.
Keywords: bruxism; sleep bruxism; masticatory muscle activity; stress; depression; polysomnography bruxism; sleep bruxism; masticatory muscle activity; stress; depression; polysomnography

Bruxism is a phenomenon commonly associated with clenching and grinding the teeth. It is estimated that it occurs in 8–31% of the population without significant differences in relation to gender. It can be divided into awake bruxism (AB) and sleep bruxism (SB) [1,2,3]. Lobbezoo et al. in 2018 international consensus proposed two separated definitions of bruxism [1]. Awake bruxism is the activity of the masticatory muscles occurring during the waking period, which is characterized by sustained or repetitive contact between the teeth or/and stiffening or thrusting of the mandible and is not a movement disorder in otherwise healthy individuals [1]. Sleep bruxism is defined as the activity of masticatory muscles during sleep, which may be rhythmic (phasic) or non-rhythmic (tonic) and is not a movement disorder or a sleep disorder in otherwise healthy individuals [1]. The phrase “masticatory muscle activity” in both definitions indicates the potential clinical consequences of both types of bruxism. It is estimated that bruxism can be provoked by three groups of factors. Biological factors including neurotransmitters, genetic factors, and cortical arousals are the first group. Psychological factors such as stress sensitivity, individual character traits, and anxiety belong to second group. Patients with bruxism, both adults and children seem to present higher results on scales assessing the intensity of mental disorders, anxiety and stress when compared to the non-bruxers [3]. The third and getting more popular group of factors associated with bruxism are exogenous origin factors such as caffeine, nicotine, drugs, medicines and alcohol [3].
Sleep bruxism can affect approximately 13% of adult population [1,2,3]. The occurrence of sleep bruxism is the highest in childhood—14–20% and decreases with age [3,4,5]. Among teens, the occurrence of sleep bruxism is estimated at 12%, among adolescents at the level of 8%, and at the level of 3% in the elderly people [6,7,8]. The occurrence of this phenomenon is independent of gender and often family. It is estimated that approximately 20 to 50% of sleep bruxers have at least one member of the closest family presenting the same phenomenon. In addition, around 2/3 of the cases of sleep bruxism occurring in childhood also occurs in a form that persists in adult life [8]. The origin of bruxism is multifactorial [1,2,3]. There are also scientific reports indicating the comorbidity of bruxism with systemic disorders, such as: thyroid diseases, digestive system disorders, sleep disorders, or cardiovascular diseases [1,2,3,7,9,10]. Particularly important factors predisposing to the appearance of sleep bruxism include: personality type, genetic predisposition, taking certain medications, and the presence of stressful situations, using caffeine and nicotine (especially with regard to the influence of these substances on the sleep architecture).
There are many scientific reports indicating connection between sleep bruxism and stress. Winocur et al. in the study on self-reported bruxism associations with perceived stress reported that participants reporting sleep and awake bruxism showed higher scores of PSS-10 [11]. Also in the study performed by Abekura et al. in which stress was assessed first by measuring the participants’ salivary chromogranin A (CgA) levels and second, using a visual analog scale (VAS), findings suggest that there is a relationship between psychological stress sensitivity and sleep bruxism [12].
There are also scientific reports indicating a connection between the occurrence of bruxism and symptoms of depression. Gungormus et al. in the study assessing the relationship between anxiety, depression, and bruxism reported that the anxiety and depression results were statistically significantly higher for bruxers than non-bruxers [13]. However, the study was carried out on patients presenting symptoms of temporomandibular disorders, which may be of great importance in this case. Fernandes et al. tried to assess the relationship between sleep bruxism, painful temporomandibular disorders and psychoemotional status [14]. They reported that sleep bruxism seemed to be a risk factor for painful temporomandibular disorders, and this in turn was a risk factor for the occurrence of higher depression and non-specific physical symptoms levels. Exact cause-effect relationship could not be established.
Currently preferred, regarding bruxism as two separate phenomena described by two definitions created the need to study the contribution of etiological factors to both types of bruxism separately in order to determine their exact participation and possible differences. Because of the apparent complexity of the problem the aim of this study is to evaluate the possible correlation between occurrence of sleep bruxism, perceived stress, and depression symptoms.

Participants group consisted of patients of the Prosthetic Dentistry Clinic functioning at the Department of Prosthetic Dentistry at the Wroclaw Medical University, Poland with probable sleep bruxism. Probable sleep bruxism was diagnosed based on the guidelines of the American Academy of Sleep Medicine, International Classification of Diseases–Ten–Clinical Modification (ICD-10-CM) [7,8].
The authors obtained the approved of the local Ethical Committee of the Wroclaw Medical University (ID KB-195/2017). Each study participant gave informed written consent. The Clinical Trial Registration information is: www.ClinicalTrials.gov (identifier NCT03083405).

Video-polysomnography was performed in selected patients. The selection was based on medical interview and physical examination. Researchers paid particular attention on sleep teeth grinding, preferred when confirmed by patients’ partner. Physical extra- and intraoral examination for a thorough reporting of the teeth and oral mucosa condition was performed for each patient. Attention was paid to the damage to the dental hard tissues (e.g., cracked teeth), mechanical wear of the teeth (i.e., attrition), indentations on the tongue and/or lip, linea alba on the inner cheek, masticatory muscle hypertrophy, repetitive failures of restorative work and prosthodontic constructions. The diagnosis of probable bruxism was based on the guidelines of ICD-10-CM and international consensus on the assessment of bruxism taking into account the present symptoms [1].

Participants were excluded from video-polysomnographic examination when they met the following criteria: lack of diagnosis of probable bruxism based on the ICD-10-CM criteria, severe systemic diseases (including severe mental diseases and disabilities), disorder that can cause sleep bruxism, intake of substances that significantly affect the function of the nervous and muscular system, inability to participate in polysomnography, lack of consent to take part in the study, age below 18 years.

Bruxism assessment based on the ICD-10-CM guidelines. The electromyographic recording from the masseter muscles region and audio and video recordings have become the basis for qualifying the bruxism episodes. As the episodes of sleep bruxism we have qualified rhythmic activity of masseter muscles that occurred after a minimum of 3 s break from the last muscle activity. Episodes were often accompanied by specific movements in the orofacial region and grinding sounds. Bruxism Episodes Index (BEI) signifying the number of bruxism episodes per hour of sleep was used to assess bruxism intensity. Electromyographic pathways were qualified as phasic episodes lasting 0.25–2 s, tonic episodes lasting more than 2 s and mixed episodes.
The ICD-10-CM guidelines states that BEI value less than 2 indicates a lack of sleep bruxism, a value of 2–4 indicates mild and moderate sleep bruxism, while a value above 4 indicates severe sleep bruxism [7,8]. In accordance to the presented data the patients were then divided into study group—bruxers (BEI ≥ 2) and non-bruxers—control group (BEI < 2).

Each patient was screened with and Perceived Stress Scale–10 (PSS-10) [15,16,17]. The PSS-10 questionnaire contains 10 questions about subjective feelings related to everyday problems, personal events, and behaviors induced by them and ways of coping over it in the last month. The scale is a simple and reliable test that can be useful both clinically and scientifically. The overall result is the sum of 10 individual questions. The maximum number of points to be obtained in the questionnaire is 40. The results from 0 to 13 points indicate a low exposure to stress, while results above 20–22 points indicate a high exposure to stress.

Each of the patients was screened for symptoms of depression using Beck’s Depression Inventory (BDI) [18,19,20,21,22]. This is a questionnaire consisting of 21 questions about the symptoms of depression. Each question can be answered with one of four responses scored from 0 to 3 points. The maximum number of points that can be obtained is 63. Scores in the range of 1–10 points indicate a result that does not deviate from the norm. Scoring in the range of 11–16 points indicates mild mood disorders. The range of 17–20 points is located on the borderline of clinical depression, 21–30 points indicate moderate depression, 31–40 severe, and 41–63 for extreme depressive disorder. The scale is a simple and understandable screening tool.

Data obtained from polysomnography and questionnaires served to create the database in Excel (Microsoft Corporation, Redmond, WA, USA). The selected elements of the database have been subjected to statistical analysis.

During the statistical analysis, first, the use of parametric methods was preferred. Data were further transformed only if they did not fulfill the assumptions of the parametric methods. It could be for example caused by the distribution shapes. If the data after the transformation met the assumptions of the parametric methods, this type of analysis was performed. If the data after the transformation still did not meet the assumptions of the parametric methods, non-parametric methods were used for the analyzes, and the analyzes were performed on the original (untransformed) data.
In additional analyzes the division into a study and control group was used in accordance to the following scheme: BEI up to 2 (“<2”) and BEI 2 and above (“2+”), respectively. The preferred analytical approach to the study of differences between groups was the Student’s t-test for unrelated samples.
The data distributions shapes and deviations from the shape of the normal distribution were analyzed with the Shapiro–Wilk test.
The Statistica 13.1 (Statsoft, Cracow, Poland) program was used to analyze the obtained data. Statistically analyzed results were considered as significant when they appeared with a probability of p < 0.05.

Intensity of sleep bruxism was not statistically significantly correlated with perceived stress based on PSS-10 and severity of depression based on BDI. The subject of the influence of the psychoemotional state on the severity of sleep bruxism should be further explored. There is a need for a comparative study of stress and depression in patients with sleep and awake bruxism also taking into account the occurrence of temporomandibular disorders. Given the results of the available literature, future analysis should be also carried out by comparing different age groups.

This study was co-financed by financial resources for Young Researchers of the Wroclaw Medical University (STM.B022.17.011). 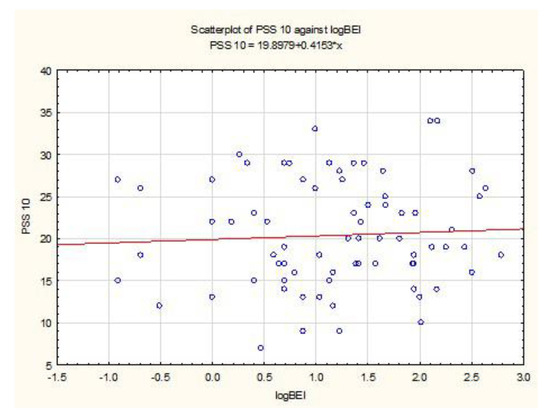 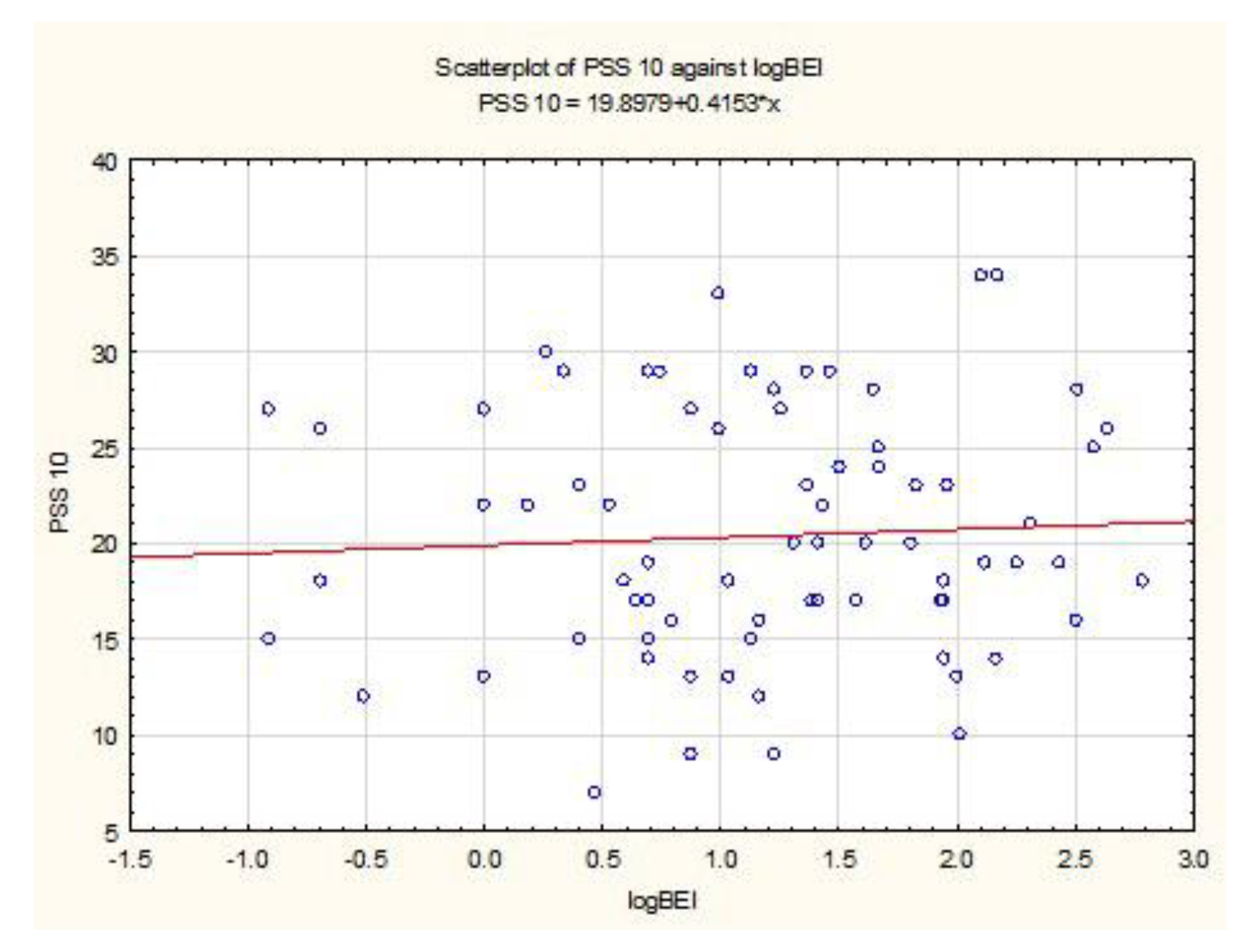 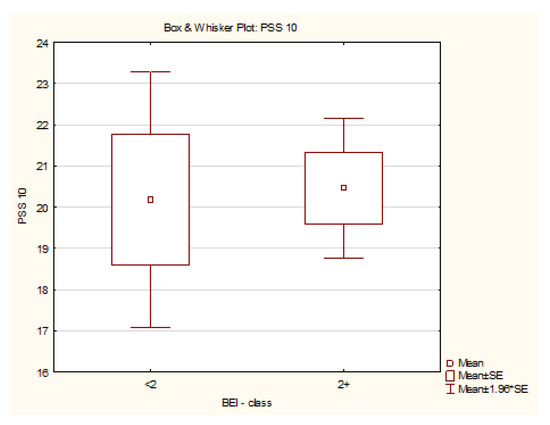 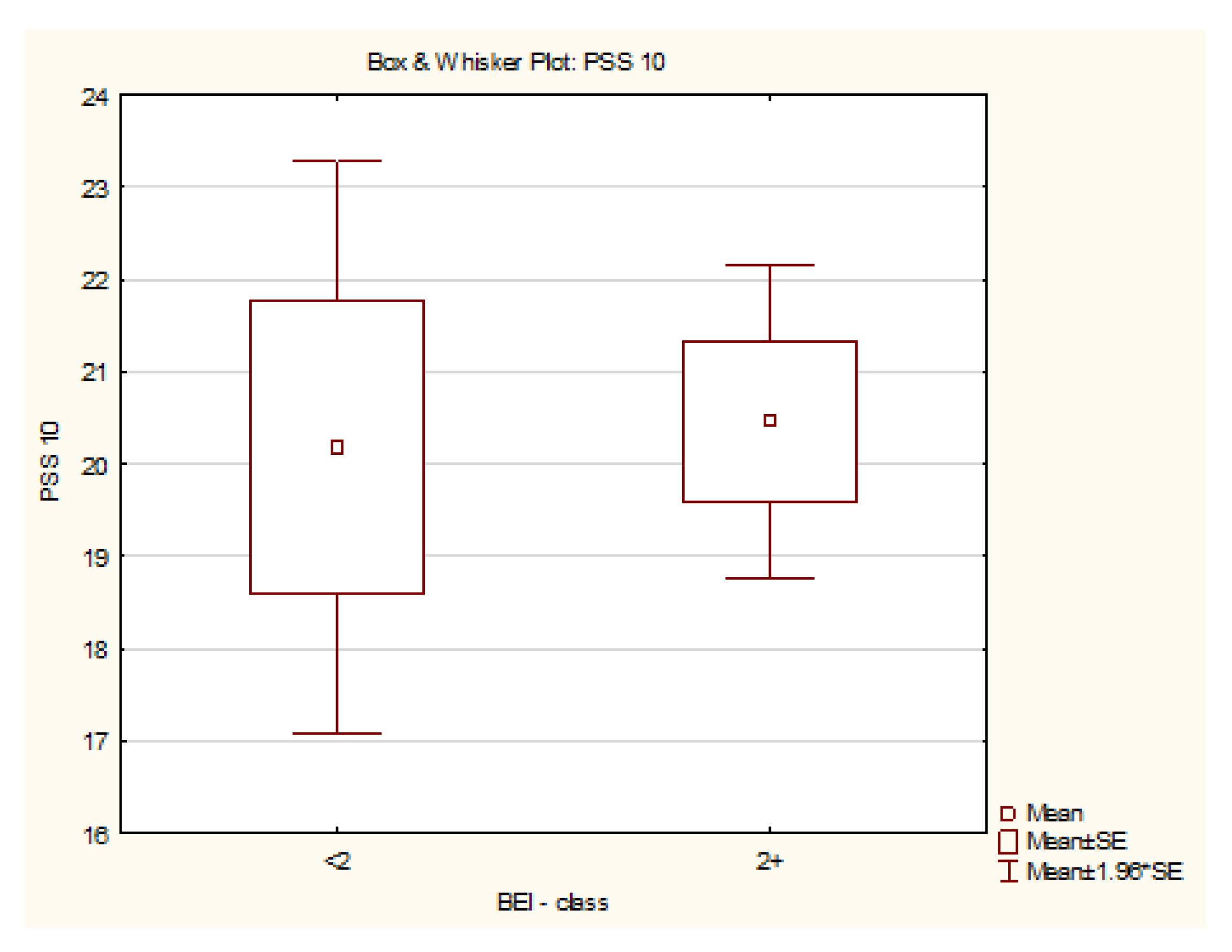 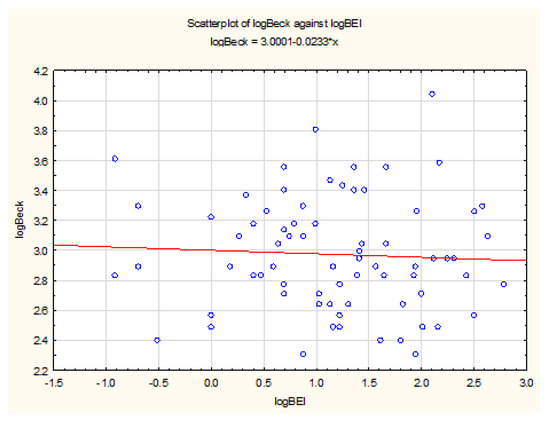 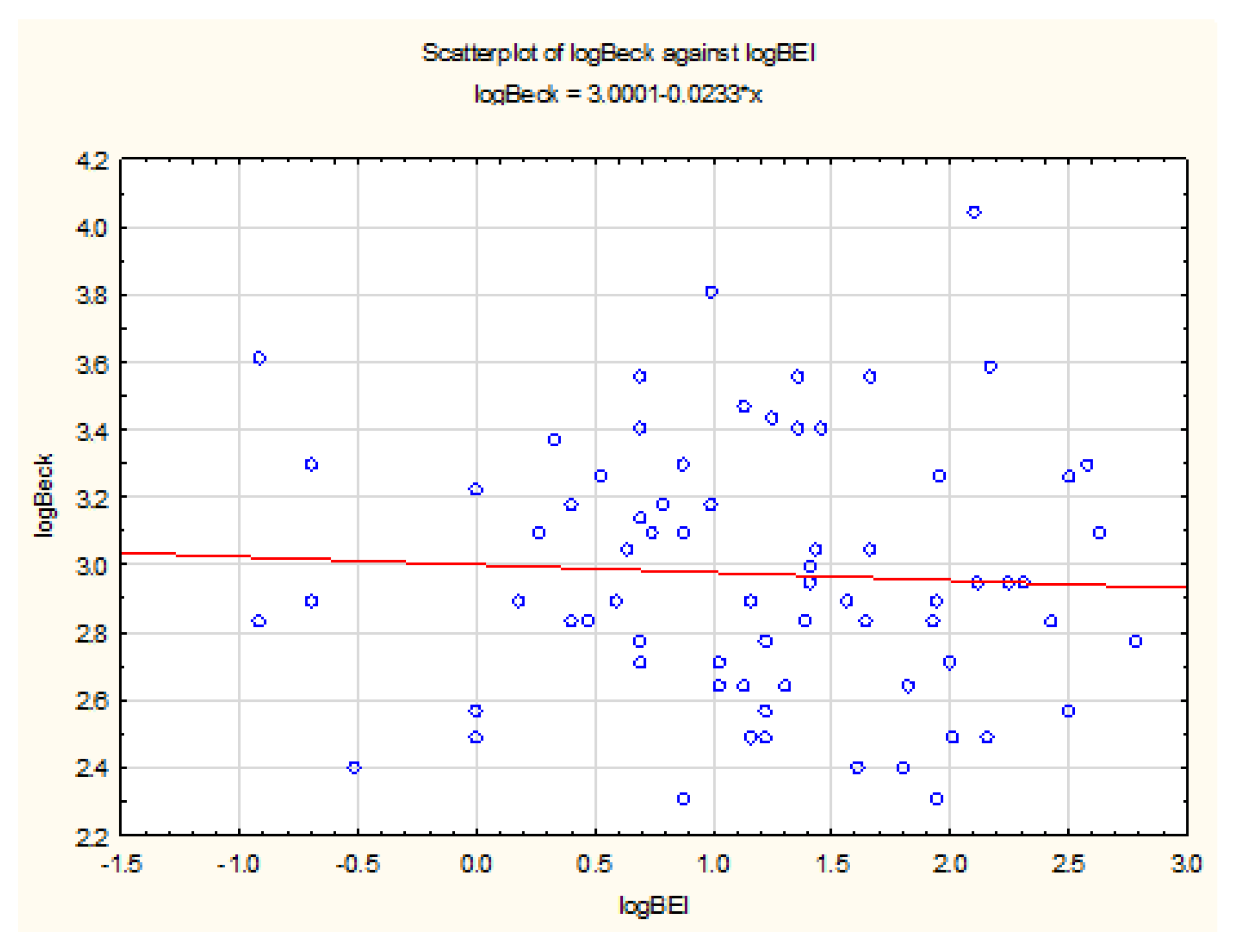 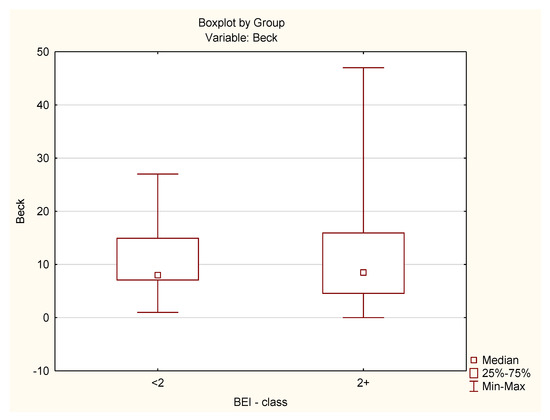 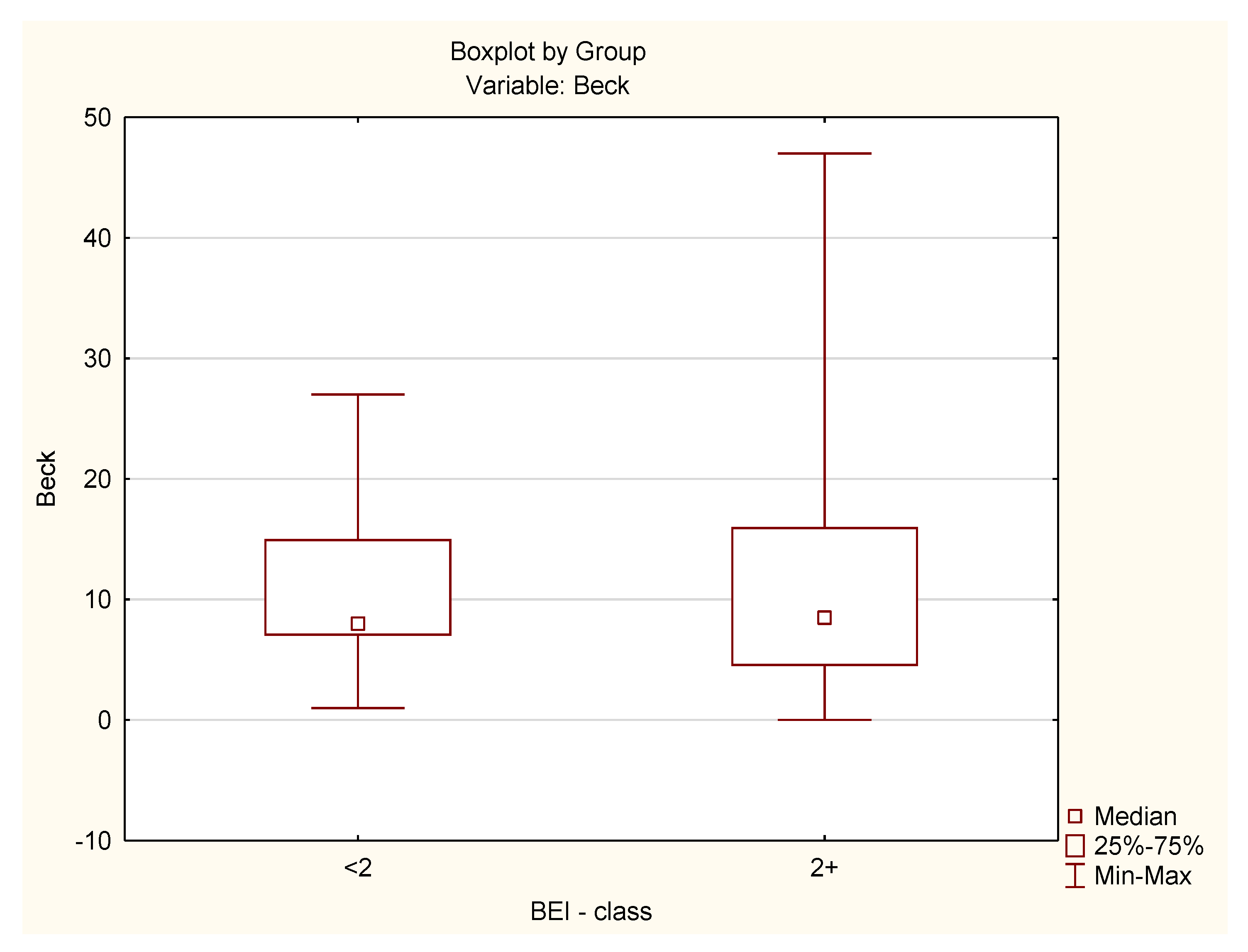