Neural Processing of Disorder-Related Stimuli in Patients with Anorexia Nervosa: A Narrative Review of Brain Imaging Studies
Next Article in Special Issue

Role of Executive Function in Response to a Problem Solving Based Psychoeducational Intervention in Adolescents with Psychosis: The PIENSA Trial Revisited
Previous Article in Journal

(1) Background: bipolar disorder (BD) is a chronic disease that often leads to functional impairment. The objective of this study is to elucidate which variables are associated with better functional outcomes in a sample of euthymic patients with BD. (2) Methods: patients were recruited at the Hospital Clinic of Barcelona and they underwent a clinical interview, a functional assessment, and a comprehensive neuropsychological evaluation. After that, patients were divided into two groups according to the Functioning Assessment Short Test total score: functionally remitted vs. functionally impaired. Following this, a multivariate logistic regression was run in order to identify clinical, demographic and cognitive factors associated with functional remission. (3) Results: a total of 420 euthymic patients with BD were assessed for this study, distributed as follows: functionally remitted (n = 221) and functionally impaired (n = 199). Finally, the multivariate logistic regression revealed that only five variables significantly contributed to the model, including: lifetime history of psychotic symptoms (the variable that contributed the most to the model), followed by the Hamilton Depression total score, and cognitive performance (executive functions and verbal memory). (4) Conclusions: treatments to ensure a good functional outcome in BD should specially prevent psychosis, target subthreshold depressive symptoms and enhance cognition, more specifically executive functions and verbal memory. View Full-Text
Keywords: bipolar disorder; psychosocial functioning; psychotic symptoms; depressive symptoms bipolar disorder; psychosocial functioning; psychotic symptoms; depressive symptoms
►▼ Show Figures 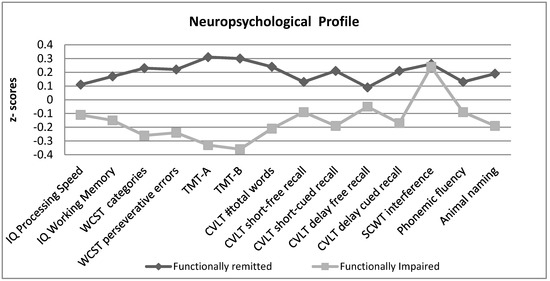