Non-steroidal anti-inflammatory drugs (NSAIDs) are commonly used to alleviate symptoms during community-acquired pneumonia (CAP), while neither clinical data nor guidelines encourage this use. Experimental data suggest that NSAIDs impair neutrophil intrinsic functions, their recruitment to the inflammatory site, and the resolution of inflammatory processes after acute pulmonary bacterial challenge. During CAP, numerous observational data collected in hospitalized children, hospitalized adults, and adults admitted to intensive care units (ICUs) support a strong association between pre-hospital NSAID exposure and a delayed hospital referral, a delayed administration of antibiotic therapy, and the occurrence of pleuropulmonary complications, even in the only study that has accounted for a protopathic bias. Other endpoints have been described including a longer duration of antibiotic therapy and a greater hospital length of stay. In all adult series, patients exposed to NSAIDs were younger and had fewer comorbidities. The mechanisms by which NSAID use would entail a complicated course in pneumonia still remain uncertain. The temporal hypothesis and the immunological hypothesis are the two main emerging hypotheses. Current data strongly support an association between NSAID intake during the outpatient treatment of CAP and a complicated course. This should encourage experts and scientific societies to strongly advise against the use of NSAIDs in the management of lower respiratory tract infections. View Full-Text
Keywords: community-acquired pneumonia; non-steroidal anti-inflammatory drugs; pleural effusion community-acquired pneumonia; non-steroidal anti-inflammatory drugs; pleural effusion
►▼ Show Figures 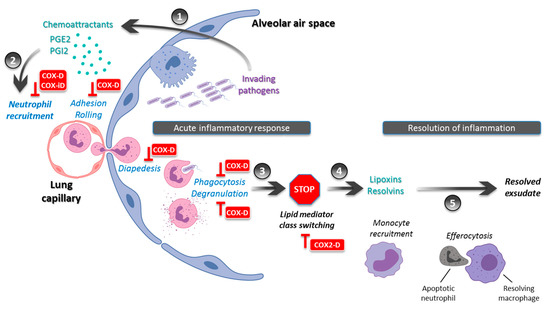