The Prognostic Significance of Puncture Timing to Survival of Arteriovenous Fistulas in Hemodialysis Patients: A Multicenter Retrospective Cohort Study
Previous Article in Journal

Clinical Features, Survival and Prognostic Factors of Glycogen-Rich Clear Cell Carcinoma (GRCC) of the Breast in the U.S. Population

The World Health Organization (WHO) defines glycogen-rich clear cell carcinoma (GRCC) of the breast as a carcinoma with glycogen accumulation in more than 90% of its tumor cells. Due to the rarity of this disease, its reported survival and clinical associations have been inconsistent due to reliance on case reports and limited case series. As a result, the prognostic implication of this cancer subtype remains unclear. Using the U.S. Surveillance, Epidemiology, and End Results (SEER) program database, we compared the incidence, demographics and prognostic factors of 155 cases of GRCC of the breast to 1,251,584 cases of other (non-GRCC) breast carcinomas. We demonstrate that GRCC is more likely to be identified as high grade, advanced stage, and more likely to have triple negative receptor status. GRCC cases display a poorer prognosis than non-GRCC carcinomas of the breast irrespective of age, AJCC staging, tumor grade, joint hormone receptor/human epidermal growth factor receptor 2 (HER2) status, and treatment. Similar to non-GRCC carcinomas, older age and higher American Joint Committee on Cancer (AJCC)/TNM staging were associated with poorer prognosis for GRCC, while treatment with surgery and radiation were associated with improved survival. Radiation, specifically in the setting of breast-conserving surgery, further improved survival compared to surgery alone. Our study highlights the poorer prognosis associated with glycogen accumulation in breast cancers and hence stresses the importance of identifying this more aggressive tumor type. View Full-Text
Keywords: glycogen; breast cancer; SEER program database; clear cell carcinoma; prognosis; survival glycogen; breast cancer; SEER program database; clear cell carcinoma; prognosis; survival
►▼ Show Figures 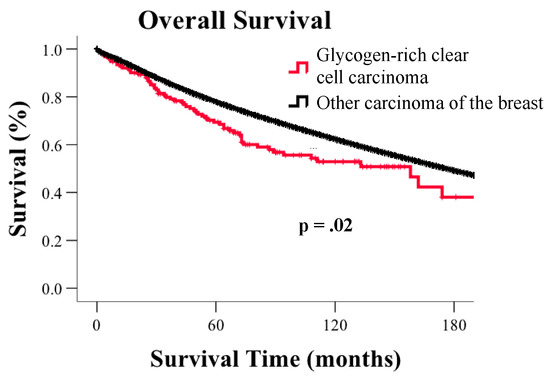