Coupling between Osseointegration and Mechanotransduction to Maintain Foreign Body Equilibrium in the Long-Term: A Comprehensive Overview

Comparison of Simple Stylet versus Lighted Stylet for Intubating the Trachea with a Direct Laryngoscope: A Randomized Clinical Trial

After acquiring approval from the Institutional Review Board of the Seoul National University Bundang Hospital (B-1501-284-004; approval date: 2015/02/05) and registering the study with the Clinical Research Information Service (CriS; http://cris.nih.go.kr; registration number: KCT0001759), written informed consent to participate in this randomized observational study was obtained from each patient. This study was conducted from March 2015 to March 2016. The study enrolled 284 patients over 18 years old, all with an American Society of Anesthesiologists (ASA) physical class I–II who were scheduled for elective surgery under general anesthesia (neuro-intervention, n = 124; hand, n = 57; breast, n = 33; abdominal, n = 27; plastic, n = 26; thyroid, n = 7; cardio-intervention, n = 4; foot, n = 2; knee, n = 2; and eye, n = 2). Patients with an ASA class of III or above, dentures, a history of cervical spine surgery, cervical herniation of the intervertebral disc, psychological disease with or without psychoactive drug use, or craniofacial anomalies; who were at risk of difficult mask ventilation or pulmonary aspiration; and/or who needed fiberoptic intubation or a double lumen endotracheal tube, were excluded from this study. After enrollment, airway parameters were checked in all patients, including the Mallampati classification, mouth opening, and thyromental distance.

Patients were pre-medicated with intravenous 0.03 mg/kg midazolam. Standard monitoring procedures were carried out, including electrocardiograms and non-invasive blood pressure, pulse oximetry, and relaxometry. To induce general anesthesia, 1.2–1.5 mg/kg propofol was infused intravenously; remifentanil was administered intravenously using a target-controlled infusion by an Orchestra® infusion pump system (Fresenius vial, Brezins, France) with target concentrations of 2–4 ng/mL. Muscle paralysis was induced by injecting a muscle relaxant (0.6 mg/kg rocuronium). Positive-pressure mask ventilation was performed with the supplemental inhalation of 6–8% sevoflurane and continuous infusion of remifentanil. Direct laryngoscopy was performed using a Macintosh direct blade No. 3 (Welch Allyn, NY, USA) after the loss of all four twitches on the train-of-four stimuli. After intubation, anesthesia was maintained with a 2–3% sevoflurane and remifentanil infusion.

The lights in the operating room were not dimmed. Intubation was performed with patients in the supine position and the head placed on a 7 cm-high hard pillow to achieve the conventional sniffing position. An endotracheal tube (TaperGuard™ cuff; Covidien, Mansfield, MA, USA) with an internal diameter of 7 mm was used for females and 7.5 mm tubes were used for males. Three anesthesiologists, who had each performed >1000 direct laryngoscopies, performed the direct laryngoscopy in this study. In both groups, the stylet-assisted tracheal intubation was performed with a direct laryngoscope without cricoid pressure, and the endotracheal tubes were bent 90° at the proximal part of the cuff balloon using a stylet [3]. A simple stylet was used in Group S. During the intubation, the endotracheal tube was inserted through the vocal cords with a stylet and the stylet was removed when the tip of the endotracheal tube was thought to pass the larynx. A lighted stylet was used in Group L and was removed after confirming transillumination of the soft tissue above the suprasternal notch (Figure 1). Successful intubation was defined as the correct placement of the endotracheal tube in the trachea, as confirmed by end-tidal CO2 capnometry, bilateral lung auscultation, and misting of the endotracheal tube. If the third attempt failed, that patient was considered a “fail” and an alternative technique was used for intubation by the duty anesthesiologist, such as video laryngoscopy or fiberoptic intubation.
The duration of each attempt was recorded as the time at which the laryngoscope was inserted to the time at which success or failure was confirmed. The total intubation time was defined as the sum of the duration of the total attempts (as many as three). Failed cases were not included in the determination of the total intubation time for either technique. The laryngoscopic view was documented using the Cormack-Lehane grade [4]: grade I (full view of the vocal cord), grade II (partial view of the vocal cord), grade III (only epiglottis visible), and grade IV (epiglottis not visible). Grade III–IV was defined as a difficult laryngoscopy. The success rate at the first attempt was compared between the two groups in a subgroup analysis.
After extubation, any blood in the oral cavity or on the endotracheal cuff was examined for evidence of mucosal bleeding by the attending anesthesiologist. The patients were then transferred to the post-anesthesia care unit. A postoperative sore throat was evaluated 1 and 24 h after surgery by a nurse blinded to the group assignments. The degree of postoperative sore throat was assessed using a numeric rating scale (0, no pain; 100, intractable pain). Other airway complications, such as dysphagia or dental injury, were queried and recorded.

The primary outcome was the success rate with the first intubation attempt. Secondary outcome measures were the total intubation time, the incidence of tinged blood at the tube tip after extubation, and the degree of sore throat at 1 hour and 1 day postoperative. A previous investigation reported that the success rate of laryngoscopic intubation with a simple stylet at the first attempt was 87% [5]. The increase in success rate at the first attempt to 98% by a lighted stylet was considered clinically significant. A sample size of 142 participants per group was calculated with a significance level of 0.05 (α = 0.05) and a power of 80% (β = 0.20) considering a 10% drop-out rate.

In conclusion, the lighted stylet increased the initial success rate of tracheal intubation by direct laryngoscopy via transillumination of the trachea. This indicates that a lighted stylet can be an effective substitution for a simple stylet during laryngoscopic intubation. 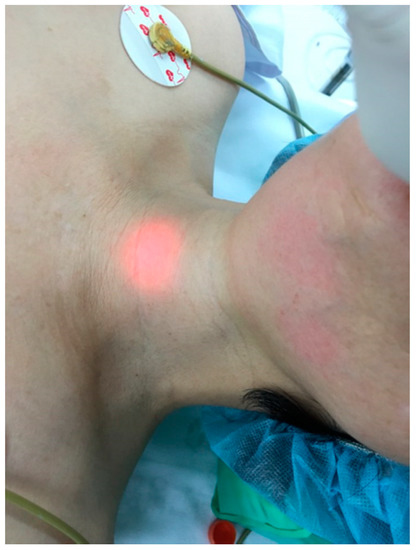 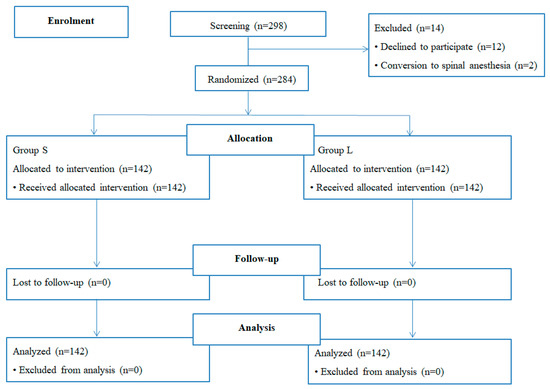 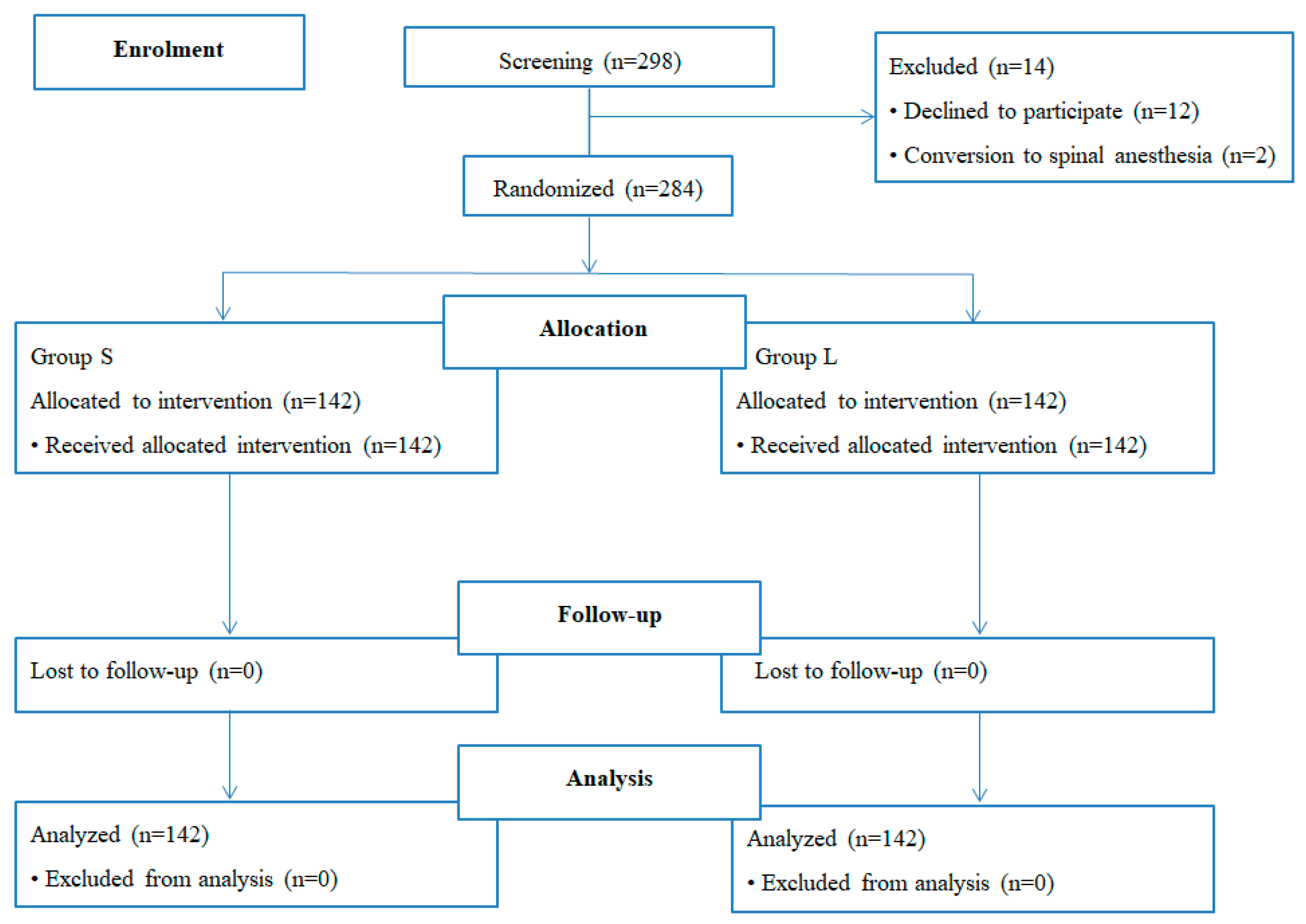 Table 2. Intubation parameters and perioperative complications.
Table 2. Intubation parameters and perioperative complications.
Data are expressed as median (interquartile range) or numbers (%). VAS: visual analogue scale. PACU: postanesthesia care unit. POD#1: postoperative 1 day.
© 2019 by the authors. Licensee MDPI, Basel, Switzerland. This article is an open access article distributed under the terms and conditions of the Creative Commons Attribution (CC BY) license (http://creativecommons.org/licenses/by/4.0/).
We use cookies on our website to ensure you get the best experience. Read more about our cookies here.
Accept
We have just recently launched a new version of our website. Help us to further improve by taking part in this short 5 minute survey here. here.
Never show this again