Article
Seizures Do Not Affect Disability and Mortality Outcomes of Stroke: A Population-Based Study
by

:
Although seizures are frequently seen after cerebrovascular accidents, their effects on long-term outcome in stroke patients are still unknown. Therefore, the aim of this study was to investigate the relationship between post-stroke seizures and the risk of long-term disability and mortality in stroke patients. This study is part of a larger population-based study. All patients were prospectively followed up by a face-to-face interview or a structured telephone interview. We enrolled 635 patients with first-ever stroke and without a history of seizures. Prevalence of ischemic stroke (IS) was 85.2%, while the remaining 14.8% of patients were affected by intracerebral hemorrhage (ICH). During the study period, 51 subjects (8%) developed post-stroke seizures. Patients with post-stroke seizures were younger, had a higher prevalence of ICH, had a more severe stroke at admission, were more likely to have an IS involving the total anterior circulation, and were more likely to have a lobar ICH than patients without seizures. Moreover, subjects with seizures had more frequently hemorrhagic transformation after IS and cortical strokes. At 24 months, the risk of disability in patients with seizures was almost twice than in those without seizures. However, the negative effect of seizures disappeared in multivariate analysis. Kaplan-Meier survival curves at 12 years were not significantly different between patients with and without post-stroke seizures. Using the Cox multivariate analysis, age, NIHSS at admission, and pre-stroke mRS were independently associated with all-cause long-term mortality. In our sample, seizures did not impair long-term outcome in patients affected by cerebrovascular accidents. The not significant, slight difference in favor of a better survival for patients with seizures may be attributed to the slight age difference between the two groups.
Keywords:
acute stroke; post-stroke seizures; long-term outcome; disability; mortality

Seizures are frequently seen after cerebrovascular accidents. Acute symptomatic or early seizures (ES) affect between 3% and 6% of all stroke patients [1,2,3,4,5,6], whereas unprovoked or late seizures (LS) have been reported in 10 to 12% of stroke patients [7,8].
Although determinants and correlates of ES and LS after stroke have been largely investigated [1,6,9,10,11,12,13,14,15,16,17], the effect of seizures on long-term outcome in stroke patients is still unknown. In fact, previous studies focused their interest on short-term mortality [2,12,18,19,20,21,22], and only a few of them reported results on disability that was assessed only at discharge [13,18,19,21,22].
Recently, Claessens et al. conducted a retrospective study to explore a possible association between post-stroke seizures and long-term mortality. After correction for possible confounding variables, the authors concluded that seizures were not significantly related to mortality risk [23]. Conversely, in the prospective Future study, Arntz et al. showed that post-stroke seizures negatively affect long-term disability and mortality [24,25]. Differences in the population study might explain these conflicting findings. In particular, Claessens et al. included only patients with intracerebral hemorrhage (ICH), whereas Arntz et al. included only young patients, aged 18 to 50 years, after transient ischemic attack (TIA), ischemic stroke (IS) or ICH [23,24,25]. Bearing in mind that ICH accounts for almost 15% of all strokes and that cerebrovascular accidents are largely more common in subjects older than 50 years, these results cannot be directly generalizable to all stroke patients.
Therefore, the aim of this study was to investigate the relationship between post-stroke seizures and the risk of long-term disability and mortality in patients affected by cerebrovascular accidents.

This survey is part of a larger population-based study on the incidence and outcome of cerebrovascular disease in the district of Udine, Friuli-Venezia-Giulia region, Italy [26,27]. In short, this study comprises all cases of incident or recurrent TIA and strokes occurring in the Udine district between 1 April 2007 and 31 March 2009. Previous results on cumulative incidence and short-term mortality (at one month and 24 months) of post-stroke seizures have been published [6]. For the present study we included patients with first-ever stroke and without a history of seizures. According to the World Health Organization definition, stroke was defined as acute symptoms and/or signs of focal disturbance of cerebral function lasting >24 h or leading to death with no apparent cause other than that of vascular origin [28]. Exclusion criteria were TIA, traumatic hemorrhagic stroke, hemorrhage in known cerebral metastasis or primary brain tumor, cerebral venous sinus thrombosis, any subarachnoid hemorrhage or ICH due to known ruptured aneurysm, and retinal infarction.
The study was approved by our local Ethics Committee. Informed consent was obtained from the patients or their representatives.

Seizures were defined according to International League Against Epilepsy (ILAE) criteria as paroxysmal disorders of the central nervous system, followed or not by loss of consciousness and/or with or without motor involvement [29]. The seizure type was described following the most recent classification of the ILAE [30]. Based on post-stroke seizures occurrence, patients were divided into SZR + (patients with post-stroke seizures) and SZR − (patients without post-stroke seizures) groups. The SZR + group comprised subjects with both ES and LS. Information on the use of antiepileptic drugs (AEDs) was recorded.

Baseline characteristics such as demographic data, vascular risk factor, and laboratory findings were collected. A CT or MRI brain scan was performed to distinguish IS from ICH and to identify stroke subtypes. IS subtypes were classified according to the TOAST (Trial of ORG 10172 in Acute Stroke Treatment) criteria (large artery atherosclerosis, cardioembolism, small-vessel occlusion, other determined etiology, and undetermined etiology) [31] and to the Oxfordshire Community Stroke Project (OCSP) criteria—total anterior circulation infarction (TACI), partial anterior circulation infarction (PACI), posterior circulation infarct (POCI), or lacunar infarct (LACI) [32]. Based on ICH location we distinguished lobar and deep ICH. Data on reperfusion therapy in patients with IS, hemorrhagic transformation after IS, and cortical location of cerebrovascular lesion were collected. However, the number of reperfused patients is very limited due to the fact that our center, at that time, was still at the beginning with this expertise. Stroke severity was determined with the National Institute of Health Stroke Scale (NIHSS) score at admission [33]. Functional outcome was assessed by means of the modified Rankin Scale (mRS) at admission based on pre-stroke disability, one month, six months, and 24 months after stroke [34]. The mRS score was dichotomized into favorable outcome (0–2) and poor outcome (3–6).
High blood pressure was defined as systolic pressure ≥140 mm Hg and/or diastolic pressure ≥90 mm Hg, and/or use of antihypertensive medication, and/or being told at least twice by a physician or other health professional that high blood pressure was the diagnosis. Atrial fibrillation was diagnosed if patient had atrial fibrillation in ECG recording before stroke and/or during hospitalization. Diabetes mellitus was defined as history of diabetes that was confirmed in medical records, and/or use of insulin/oral hypoglycemic agents, and/or random non-fasting blood glucose concentration ≥11.1 mmol/L. Hypercholesterolemia was defined as fasting total cholesterol serum level ≥5.18 mmol/L (200 mg/dL), and/or fasting low-density lipoprotein cholesterol serum level of ≥4.14 mmol/L (160 mg/dL), and/or use of lipid-lowering medications. Patients were defined as smokers if they were current smokers or they had stopped smoking <3 months before the index stroke.
The following abnormalities in laboratory parameters were collected: hypo- and hypernatremia, defined as sodium values <135 mmol/L and >145 mmol/L, respectively; hypo- and hyperkalemia, defined as potassium values <3.5 mmol/L and >5.1 mmol/L, respectively; and hypo- and hyperglycemia, defined as glucose values <3.9 mmol/L and >11.1 mmol/L, respectively.

The primary endpoints were

(1)
Poor outcome at 24 months, as assessed by the mRS;
(2)
All-cause long-term mortality. Information on the permanence in life was systematically recorded thanks to the use of death certificates.

The two patient groups (SZR + versus SZR −) were compared regarding baseline characteristics, and rate of poor outcome at 24 months. Differences between the two groups were assessed by means of the chi-square test (Fisher’s exact test) for categorical variables and Student t test for independent samples when continuous variables had a normal distribution. The Mann–Whitney U test was used when continuous variables had an abnormal distribution and for ordinal variables. The association between post-stroke seizures and poor outcome was examined by binary logistic regression modeling, after adjusting for the other variables with a probability value <0.1 in univariate analysis. Long-term mortality was estimated with the Kaplan-Meier analysis for patients with and without post-stroke seizures. Independent predictors of mortality were detected by means of a Cox multivariate model that included age, sex, presence of post-stroke seizures, presence of IS or ICH, NIHSS at admission, and pre-stroke mRS, as covariates. Finally, we compared by means of the chi-square test the long-term disability and mortality between each group of patients, identified according to the specific type of post-stroke seizure, and the subjects without seizures. Data are displayed in tables as means and standard deviations (SD), if not otherwise specified. All probability values are two-tailed. A p value <0.05 was considered statistically significant. Statistical analysis was carried out using the IBMSPSS Statistics, Version 22.0 (IBM, Chicago, IL, USA).

Six hundred and thirty-five patients with first ever stroke entered the study (Figure 1). Prevalence of IS was 85.2% (n = 541), while the remaining 14.8% (n = 94) of patients was affected by ICH. Median NIHSS score at admission was 5 (IQR 2-15). One hundred and forty-one patients (22.2%) had a pre-stroke mRS >2. During the study period, 51 subjects (8%) developed post-stroke seizures, i.e., focal aware in 15 (29.4%), generalized tonic-clonic in 15 (29.4%), focal to bilateral tonic-clonic in 11 (21.6%), and focal impaired awareness in 10 (19.6%). AEDs were started in 21 patients (41.2%).
According to baseline characteristics, patients with post-stroke seizures differed significantly from those without seizures (see Table 1). They were younger, had a higher prevalence of ICH, had a more severe stroke at admission, were more likely to have an IS involving the total anterior circulation based on OCSP classification, and to have a lobar ICH. Moreover, subjects with seizures had more frequently hemorrhagic transformation after IS (SZR +: 31.4% versus SZR −: 13.7%, p = 0.005) and cortical strokes (SZR +: 52.9% versus SZR −: 32.5%, p = 0.003) than those without seizures. Although very limited in its numerosity, prevalence of rt-PA use for IS did not differ between patients with and without seizures (SZR +: 0% versus SZR −: 2.4%, p = 0.4). No patient was treated, at that time, with mechanical thrombectomy for IS.

At 24 months, 419 patients (66%) had a poor outcome, 40 (9.5%) of whom had seizures. There were 216 patients (44%) without disability, and 11 (5.1%) of them had seizures. As reported in Table 2, several variables were associated with long-term disability in univariate analysis. In particular, the risk of poor functional outcome in patients with seizures was almost twice than in those without seizures. The negative effect of seizures disappeared in multivariate analysis that identified age, ICH, and NIHSS at admission as independent predictors of 24 months disability.

Kaplan-Meier curves showed a no significantly higher survival rate for patients with post-stroke seizures compared to those without seizures (36.7% versus 26.2%; p = 0.2; Figure 2). Age, NIHSS at admission, and pre-stroke mRS were independently associated with all-cause long-term mortality at the Cox multivariate analysis (see Table 3).

In Table 4, we compared prevalence of long-term disability and mortality between patients affected by each specific type of seizure and subjects without post-stroke seizures.

This research receive no external funding. 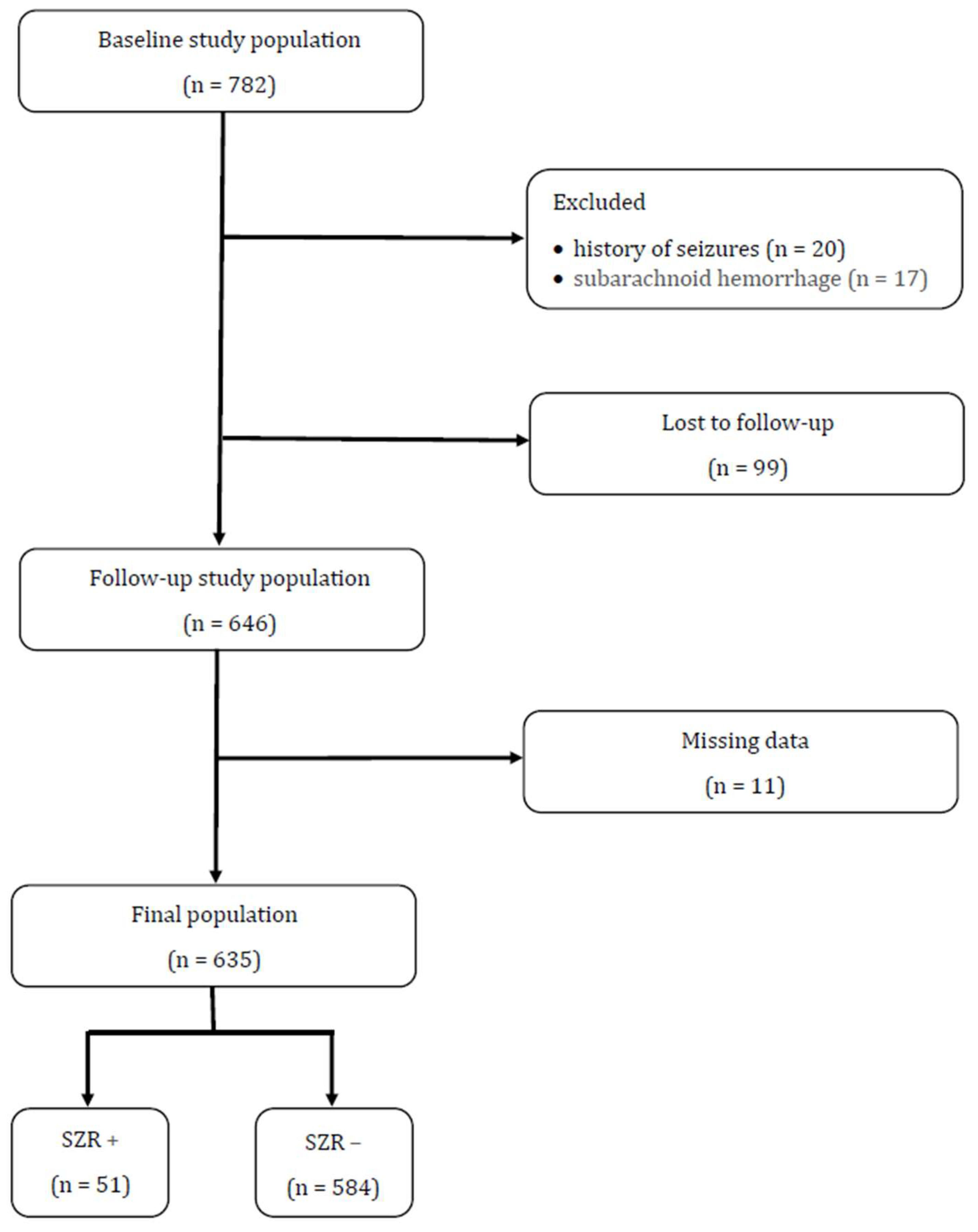