Are We Sure that Adjuvant Chemotherapy is the Best Approach for Resectable Pancreatic Cancer? Are We in the Era of Neoadjuvant Treatment? A Review of Current Literature
Previous Article in Journal

Impact of a Prescription Support Tool to Improve Adherence to the Guidelines for the Prescription of Oral Antithrombotics: The Combi-AT Randomized Controlled Trial Using Clinical Vignettes

on behalf of the CENTER-TBI Participants and Investigators
†

Patients were included in the Collaborative European NeuroTrauma Effectiveness Research (CENTER-TBI) research project, which is a multicentre, prospective observational longitudinal cohort study, conducted in Europe and Israel [1,23]. The core study enrolled patients with all severities of TBI who presented to centres between 19 December 2014 and 17 December 2017. Inclusion criteria were a clinical diagnosis of TBI, an indication for CT scanning, presenting to a centre within 24 h of injury, and obtained informed consent adhering local and national requirements: prior to inclusion, either personally, or through a legally designated representative [23]. Participants were free to withdraw at any point in time during the study without stating a reason [23]. Patients were excluded when there was a severe pre-existing neurological disorder, i.e., cerebrovascular accident, transient ischemic attacks, and epilepsy, which could potentially invalidate outcome assessments. Three strata were used to prospectively differentiate patients by care path: ER (patients evaluated in the ER and discharged afterwards), admission (patients admitted to hospital ward) and intensive care unit (ICU) (patients who were primarily admitted to the ICU) [23]. The main descriptive findings of CENTER-TBI have been published [24].

Post-concussion symptoms were assessed by the RPQ [25], which evaluates the frequency and severity of 16 post-concussion symptoms. Symptoms evaluated included headaches, dizziness, nausea/vomiting, noise sensitivity, sleep disturbance, fatigue, being irritable, feeling depressed or tearful, feeling frustrated or impatient, forgetfulness, poor concentration, taking longer to think, blurred vision, light sensitivity, double vision, and restlessness. Patients rated the severity of the post-concussion symptoms on a five-point Likert scale, where 0 represents a rating corresponding to “not experienced at all”, 1 “no more of a problem than before the TBI”, 2 “a mild problem”, 3 “a moderate problem”, and 4 “a severe problem” [25]. To obtain the total score, the ratings of all 16 items are summated, excluding the ratings of 1 [25]. The RPQ was administered at three and six months following injury, and patients were asked to rate the severity of the symptoms over the last 24 h.
Various approaches to defining PCS exist [26]. For this study, we primarily focused on the mapped ICD-10 classification method, in which we defined patients as having PCS when they reported any three of the seven symptoms described in the ICD-10 criteria (e.g., headache, dizziness, sleep disturbance, fatigue, being irritable/easily angered, forgetfulness/poor memory, and poor concentration) [8]. As previous research is inconclusive concerning which severity rating should be applied as a cut-off [26], two different cut-offs were assessed: rating score 2 (≥2), corresponding to symptoms rated as mild or worse, and rating score 3 (≥3), corresponding to symptoms rated as moderate or worse.
The RPQ was collected by telephone and face-to-face interviews, or per postal or web-based questionnaires (Table S1). The questionnaire was translated into 18 languages and linguistically validated [23,27].

The CENTER-TBI study (EC grant 602150) has been conducted in accordance with all relevant laws of the EU if directly applicable or of direct effect, and all relevant laws of the country where the Recruiting sites were located, including, but not limited to, the relevant privacy and data protection laws and regulations (the “Privacy Law”), the relevant laws and regulations on the use of human materials, and all relevant guidance relating to clinical studies from time to time in force including, but not limited to, the ICH Harmonised Tripartite Guideline for Good Clinical Practice (CPMP/ICH/135/95) (“ICH GCP”) and the World Medical Association Declaration of Helsinki entitled “Ethical Principles for Medical Research Involving Human Subjects”. Ethical approval was obtained for each recruiting site. Informed Consent was obtained for all patients recruited in the Core Dataset of CENTER-TBI and documented in the e-CRF. The list of sites, Ethical Committees, approval numbers, and approval dates can be found on the official Center TBI website (www.center-tbi.eu/project/ethical-approval).

For all analyses, data was extracted from the INCF Neurobot tool (INCF, Sweden), a clinical study data management tool. Version 2.0 of the CENTER-TBI dataset (data frozen in January 2019) was used in this manuscript. The number and percentage of patients who were classified as having experienced mTBI (complicated and uncomplicated mTBI) were assessed by stratum and per GCS level. Descriptive analyses for demographic data (age, gender and education) injury mechanism, GCS at baseline, first CT scan, and RPQ total score were performed and examined for patients with mTBI, complicated and uncomplicated mTBI at 3 and 6 months post-injury. Chi-square tests for categorical variables and Student’s t tests for continuous variables were used to compare patients with mTBI who completed the RPQ (filled in all items) with those with incomplete RPQ data (not all items filled in). Additionally, these tests were also performed to compare patients with complicated versus uncomplicated mTBI. To assess whether there was a relation between having a completed RPQ at three and/or six months, a McNemar test was performed.
At each time point, we computed the prevalence and percentages of post-concussion symptoms and of patients who were classified as having PCS according to our mapped ICD-10 classification method, and we explored whether there were differences between the complicated and uncomplicated group. For all analyses, a p-value of p < 0.05 was considered significant.
For the analysis of the effect of complicated versus uncomplicated mTBI on PCS, data for the following predictor variables: age, GCS, stratum, education, gender, psychiatric medical history, and cause of injury were first multiply imputed. We assumed missing at random as the mechanism of missingness. For the component variables considering psychiatric medical history (anxiety, depression, sleep disorders, schizophrenia, substance abuse disorder, and other), missings were treated as absence of this diagnosis, since investigators could only enter components if the main category (e.g., psychiatric medical history) had been scored positive. All potential confounders, which were based on clinical relevance, the outcome (PCS), and exposure (complicated TBI) were included in the imputation model. Only the cases with observed outcomes were analysed in the main analysis. The Multivariate Imputation by Chained Equations (mice) package, which imputes incomplete multivariate data by chained equations [28], was used to create five datasets [29]. Results of each imputed data set were combined according to Rubin’s rules [30].
To analyse the association of complicated versus uncomplicated mTBI on the presence of PCS, logistic regression was performed. We adjusted for the following baseline covariates: age, gender, education, injury mechanism, GCS, complicated vs. uncomplicated, and stratum. The unadjusted and adjusted effects were displayed as odds ratios (OR) with 95% confidence intervals (95% CI).
All statistical analyses were performed using SPSS version 25 for Windows (IBM SPSS Statistics, SPSS Inc, Chicago, IL, USA) and R (version 3.2.2 or higher, the R Foundation for Statistical Computing, Vienna, Austria).

Within CENTER-TBI, most patients were classified as mTBI (N = 2955; 65.5%), and these patients constituted the vast majority of patients in the ER (97%) and admission (93%) strata, but were also present in the ICU (34%) stratum (Table 1). Complicated mTBI was identified in 12%, 45%, and 73% of mTBI in the ER, admission and ICU strata, respectively.
Figure 2 shows the total number of patients per stratum and provides additional differentiation by GCS score for complicated and uncomplicated mTBI. A larger number of patients with complicated mTBI were found in the admission and ICU strata compared to the ER stratum. Many patients had a significantly lower GCS score when looking at complicated versus uncomplicated mTBI (p < 0.01).
A total of 1302 patients with mTBI and a completed RPQ from the CENTER-TBI database were included in this study (Figure 1). Table 2 shows the characteristics of our study sample. The median age of patients after mTBI was 53 years (interquartile range (IQR); 35–66) and 64% were male. The median number of years of education was 14 (IQR; 11–17) and almost half (47%) of the patients were injured due to an incidental fall, followed by road traffic incidents (39%). Approximately 46% showed any intracranial injury on the first CT and was defined as complicated mTBI.
Patients after complicated mTBI were significantly older (p < 0.01) and had a higher total RPQ score (p < 0.01: 11.8 vs. 9.4) compared to patients after uncomplicated mTBI. Patients after mTBI who completed the RPQ were not significantly different from those with incomplete RPQ data, except that they had a slightly higher number of education years (p < 0.01: 13.9 vs. 12.6) and more patients reported to have had a psychiatric medical history (p < 0.01) (Table S2). Additionally, there was no statistically significant difference between patients who had a completed RPQ at three and/or six months (p = 0.17).

This study showed that patients after complicated mTBI reported more post-concussion symptoms and have higher PCS prevalence rates compared to patients with uncomplicated mTBI at three and six months, which presents complicated mTBI as an indicator for these problems. However, the differences between both patient groups are small, and after adjusting for baseline covariates, this association could be explained by differences in baseline characteristics. These findings highlight the need to take the long-term impact on outcome for patients diagnosed with mTBI into consideration, and both patient groups are in need of clinical follow-up.

We gratefully acknowledge interactions and support from the InTBIR funders and investigators. We are immensely grateful to our patients with TBI for helping us in our efforts to improve care and outcome for TBI. Additionally, we are very thankful for the collaboration with Neurotrauma Sciences, which led to the initiation of this study. 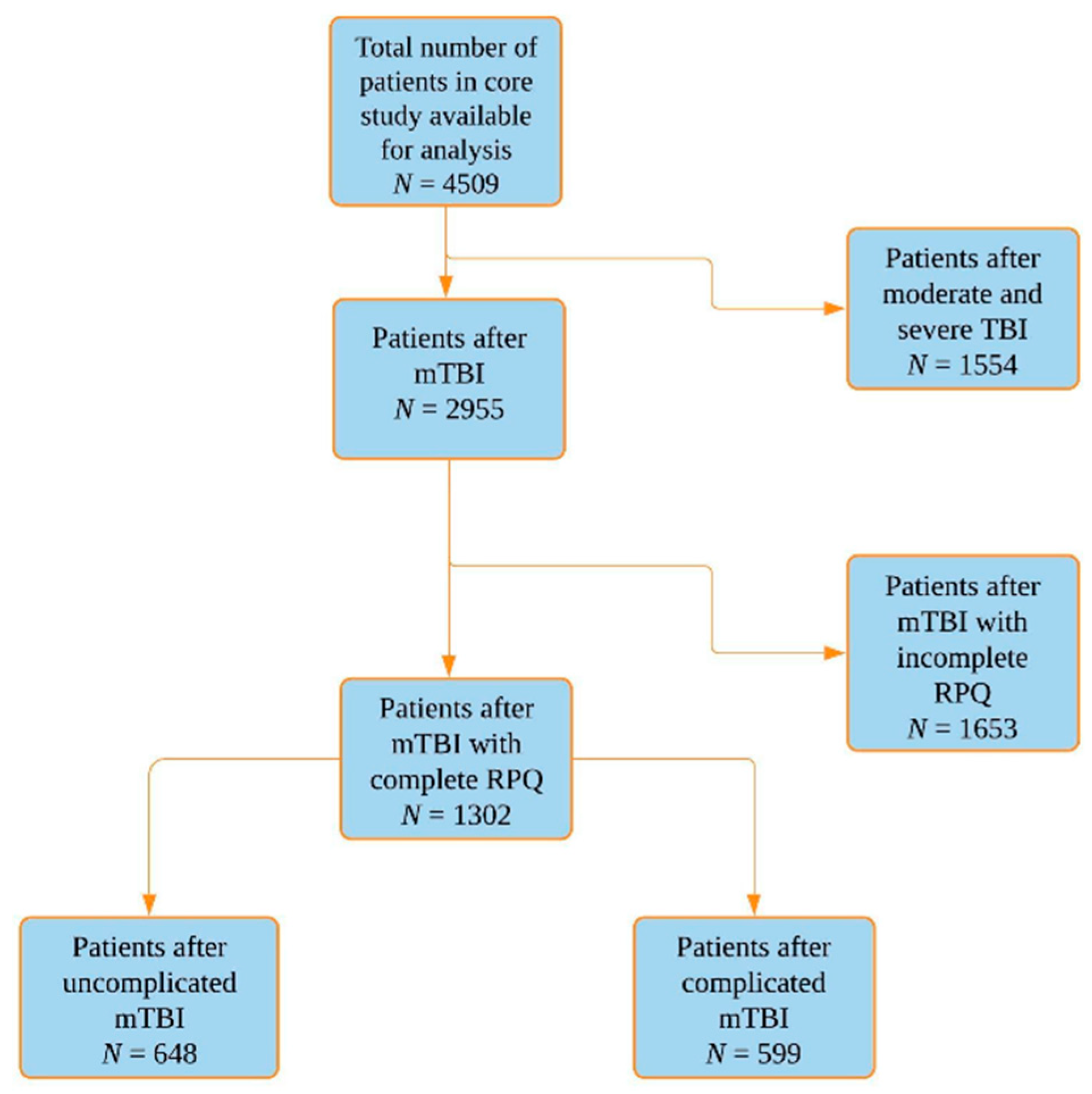 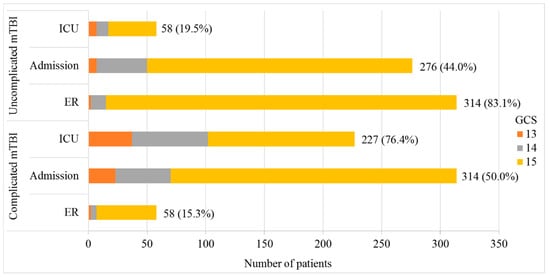 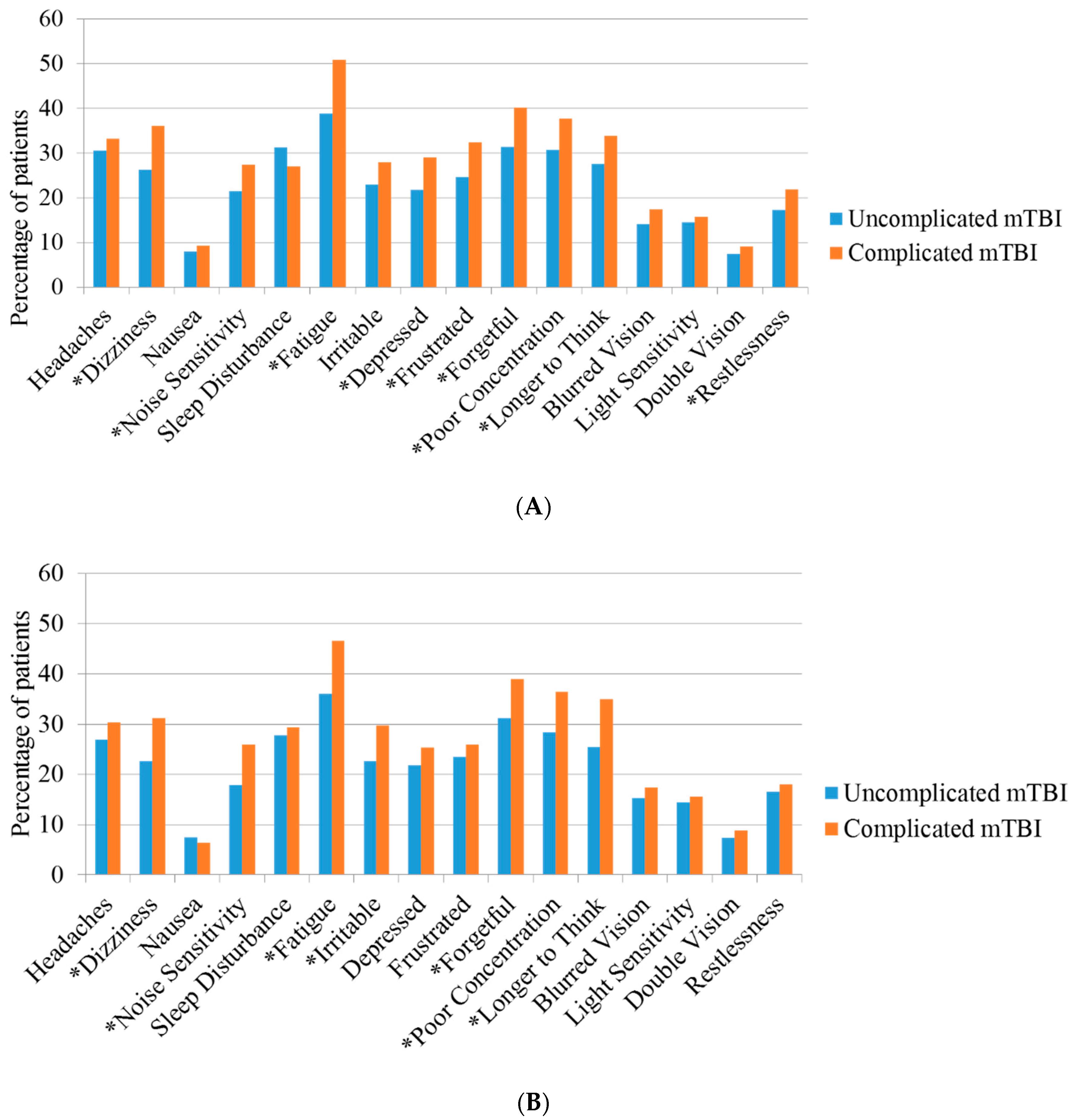 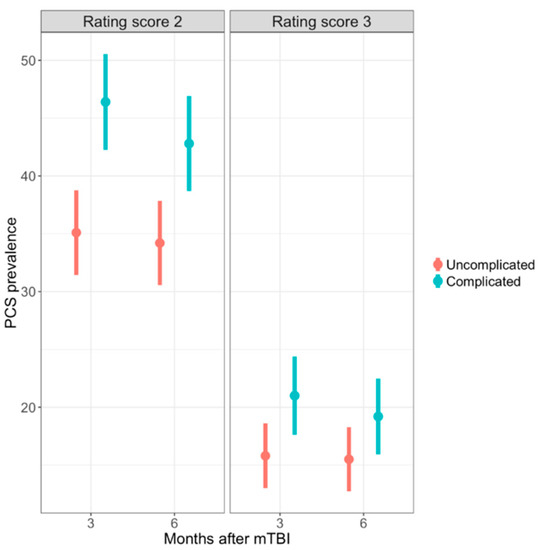 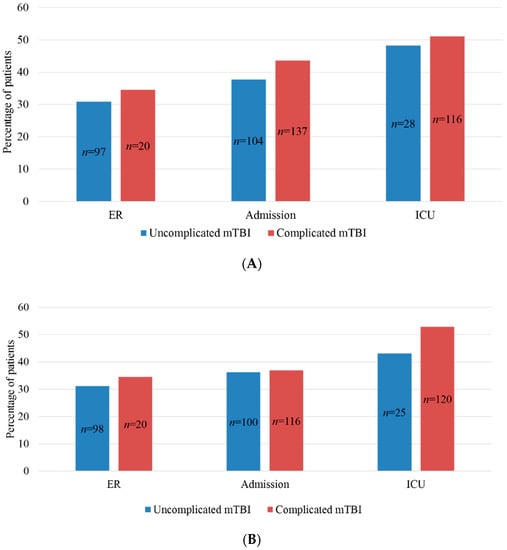 Table 2. Characteristics of the study population.
Table 2. Characteristics of the study population.
1 Data are displayed as median, with the first and third quartile given within brackets. mTBI, mild traumatic brain injury; RPQ, Rivermead Post-Concussion Symptoms Questionnaire; CT, Computed Tomography. Note: only completed RPQ (all items of the questionnaire filled out).