The heart of an athlete who does long-term training and has normal physiological and morphological changes is known as athlete’s heart syndrome, athletic heart syndrome or athletic heart. This adaptation is accepted as a normal physiological response of the heart to repetitive exercise [1]. It includes a decrease in the resting heart rate and an increase in the left ventricle mass and volume although the systolic and diastolic functions are normal. These are the features of athletic heart [2]. The level of the changes that occur in the heart varies according to the type of sport. Increases in the left ventricle mass and dilatation are seen in void diameters (eccentric hypertrophy) in sports that require high endurance (e.g., football). In sports that require high-level force (e.g., weight lifting), however, an increase is observed in the left ventricle mass, although the diameters of voids do not change (concentric hypertrophy). In athletes participating in sports that require high endurance and high force (e.g., rowing), eccentric and concentric hypertrophy occur together [3]. Although ischemia may develop and cause malignant arrhythmia in athletes for whom such sports cause abnormal ventricular hypertrophy, it is questionable whether the hypertrophy that occurs as a physiological response in healthy individuals may cause such a risk. Another hypothesis suggests that the action potential time in myocardia cells that occurs as a result of hypertrophy causes the elongation of the repolarization time, which might prepare the ground for ventricular arrhythmia [1,4].
Myocardia repolarization time is associated with being sensitive to ventricular tachyarrhythmia mainly with torsades de pointes. This may transform into ventricular fibrillation [5]. These measurements may be made by computing the Tp-e interval, which is accepted as the indicator of QT interval (QT), QT dispersion (QTd) and ventricle repolarization total dispersion (transmural, apicobasaland global) [6,7,8]. In a recent study conducted by Castro Hevia J et al. [9], it was reported that there is a close relation between life-threatening ventricular arrhythmia and the elongation of these parameters. This study used Tp-e dispersion (Tp-e) d values and elongated Tp-e interval in patients with Brugada Syndrome [9]. It has been shown in recent studies that the Tp-e/QT ratio provides accurate predictive values for ventricular arrhythmia and might be used as a novel ventricular arrhythmia index [10,11].
Sudden death seen in athletes has caused societal concern about this topic. The post workout death of professional footballer, Davide Astori, on 4 March 2018 renewed public interest in the deaths of athletes. He was the captain of Fiorentina FC. Do athletes with athletic heart have a greater risk for sudden death than healthy non athletes? Is the athlete’s heart proarrhythmic? Are there electrocardiographic (ECG) data that might reveal the tendency of athletic heart to have arrhythmia? It has not yet been shown whether the physiological changes observed in professional athletes lay the foundation for ventricle repolarization changes, and thus, for malignant ventricular arrhythmia. Many studies have been conducted on athletes to evaluate the ventricle repolarization QT time with parameters, such as QT dispersion [2,12,13,14]. The purpose of this study is to determine the potential increased ventricle repolarization heterogeneity of athletes and possible arrhythmia risks which may develop due to intense training in asymptomatic athletes. In this context, we sought to contribute to the ongoing discussions on the athletic heart–arrhythmia axis by using the computations of Tp-Te time, Tp-Te/QT ratio, Tp-Te/QTc ratio, and Tp-Te dispersion Tp-Te(d) through 12-derivation surface electrocardiogram (ECG) in athletes.

In this study, 226 well-trained athletes or well-trained students from Fırat University, Physical Education and Sports High School were admitted to the outpatient clinics of Elazıg Education and Research Hospital, Elazıg, Turkey between July 2016 and February 2018.They received routine annual follow-ups or licenses. A total of 339 healthy controls were also included in the study. The participants’ ages ranged from 17 to 42 years. The cardiovascular system and other system examinations of the participants were normal, and they did not have any known systemic diseases. No participants had any complaints that could be associated with dysrhythmia, such as palpitations or fainting. There were no histories of sudden death or cardiovascular disease that could cause sudden death. The average training duration was 14.15 ± 6.57 years in the athlete group. The weekly training durations of the athletes were 8.67 ± 1.97 hours. They trained once a day. The daily training programs were in the form of 30-min isometric exercise, and then 60-min to 120-min athletic exercises, boxing, kick-boxing, fitness, handball, football, and basketball.
The study was performed in accordance with Helsinki principles and approved by the local Ethics Committee (Presidency of T.C. Fırat University Ethics Committee).

The 12-lead ECG recordings were obtained while the participants were in the supine position. There was a paper speed of 50 mm/s and a voltage of 10 mm/mV with the standard ECG system (Cardiofax V model 9320, Nihon Kohden, Tokyo, Japan). All ECGs were scanned. The T wave peak-to-end interval (Tp-Te) and QT and RR intervals were measured using MATLAB® computer software (MathWorks, Natick, MA, USA) codes that were written by an engineer (Figure 1). These codes were based on image manipulation principles.
The image manipulation method can be divided into three subdivisions: image processing, image analysis, and image understanding. Image analysis is the technique used to gather measurement data from the ECG. Running the written code imports the image file first and then, by choice, allows the user to choose points necessary to obtain measurements or generate a matrix that consists of a dedicated numeric value of each pixel’s colour. Creating a matrix gives the user the flexibility of using functions which are predefined by the program.
The QT interval was defined from the beginning of the QRS to the end of the T wave as the intersection of the tangent to the downslope of the T wave and the isoelectric line [19]. Measurements of the QT interval were recorded from all precordial leads. The greatest values were accepted as the QTmax. The QTc (QT corrected) was obtained using Bazett’s formula [20] (Figure 1). The Tp-Te interval was defined as the interval from the peak of the T wave to the end of the T wave (Figure 1). With negative or biphasic T waves, the T peak was defined as the nadir of the Twave. In the presence of a notched T wave, the QT interval was determined using the tangent line drawn on top of the interception point of the start of QRS and the isoelectric line and the maximum slope of the second notch (Figure 1). T waves smaller than 1.5 mm in amplitude were not measured. Measurements of Tp-Te interval were recorded from all precordial leads. The greatest values were accepted as T wave peak-to-end intervals (Tp-Te). T wave peak-to-end interval dispersion Tp-Te(d) was calculated as the difference between the maximum and minimum Tp-Te interval in the precordial leads V1 to V6. The Tp-Te/QT ratio was calculated using Tp-Te and QTmax measurements. The Tp-Te/QTc ratio was obtained by dividing Tp-Te interval by the QTc.

2.3. Exclusion Criteria of the Study

Parameters, such as body mass index (BMI), body surface area (BSA), and blood pressure, were measured with the physical examination. BMI and BSA were calculated as indicated in the formulas below.
Body mass index: Weight (kg)/height (m) and Mosteller Formula: BSA (m2) = (height (cm) × weight (kg)/3600)1/2.
The blood pressure records of the participants were noted. The participants having a systolic blood pressure ≥140 mmHg and/or a diastolic blood pressure ≥90 mmHg and those taking antihypertensive drugs were accepted as hypertensive and excluded from the study.
Venous blood samples were collected from each participant in order to assess serum biochemical parameters. The participants having measurements of fasting blood glucose levels ≥126 mg/dL or using oral antidiabetic drugs or insulin were accepted as diabetic and excluded from the study.
The participants who had right or left bundle-branch block in 12-derivation surface ECG, had atrial or ventricular arrhythmia, used antiarrhythmic agents that might cause arrhythmia (such as probucol, terfenadine, amiodarone, erythromycin, clarithromycin, antidepressant agents, and antipsychoticagents), had electrolyte disorder, had BMIs >30, had structural heart disease, and were pregnant were not included in the study.

Statistical analyses were performed using SPSS software, version 16.0 (SPSS Inc., Chicago, IL, USA) for Windows. Continuous variables were expressed as mean standard deviations and categorical variables were expressed as counts and percentages. The student t-test and the Mann–Whitney U test were used to compare groups for continuous variables. The chi square test was used for categorical variables. Normality of the distribution of the continuous variables was evaluated using the Kolmogorov–Smirnov test. All other continuous values except QTc, weight, and body surface area (BSA) did not have normal distribution. The Mann–Whitney U test was used to compare these parameters. Correlation analyses were performed using Pearson’s correlation test. All p-values were two-tailed, and values <0.05 were indicated as statistically significant.

We thank Nevzat Gozel for helping to get ethical approval from Presidency of T.C. Fırat University Ethics Committee. 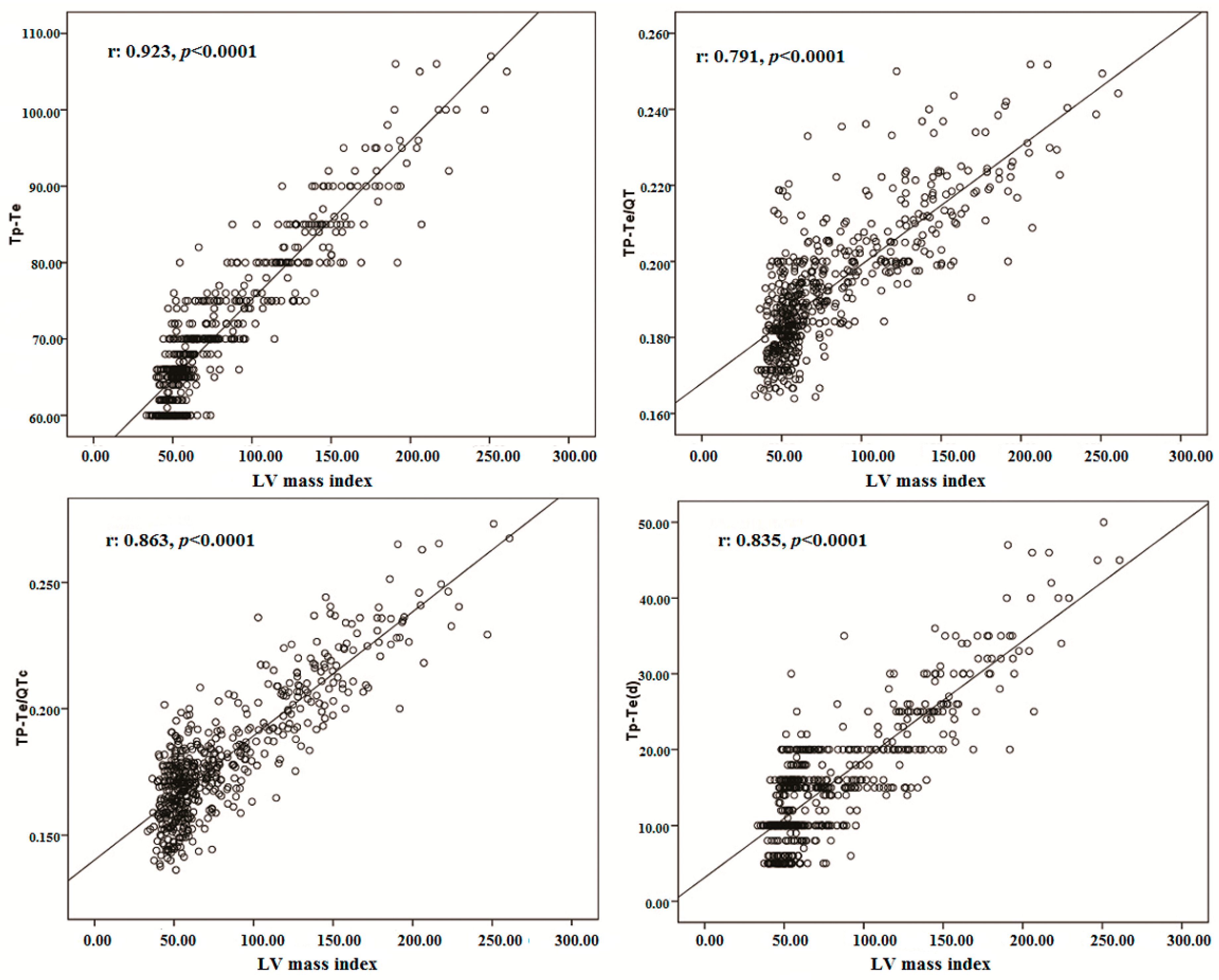