Neurological and Sleep Disturbances in Bronchiectasis

Bronchiectasis is a chronic lung disease characterised by repeated episodes of infection and chronic inflammation that can lead to significant morbidity and mortality [1,2]. Bronchiectasis unrelated to cystic fibrosis, hereafter referred to as bronchiectasis, once thought to be an orphan disease, is being recognised with increasing frequency globally especially with the increasing availability of high resolution computed tomography [3,4,5]. Bronchiectasis is associated with irreversible bronchial dilatation in patients who suffer from productive cough, purulent sputum and recurrent infective exacerbations [6,7]. Patients experience 1.5–6.5 episodes of exacerbations per year [8], leading to increased risk of admission and readmission to hospital and potentially high healthcare costs [9]. A further study demonstrated that the prevalence of bronchiectasis increased by 8.7% per year between 2000 and 2007 [10].
Compared to other respiratory conditions, bronchiectasis has attracted relatively less attention, possibly because of lack of specific therapy for management, and the perception that severe bronchiectasis is less common [8]. While there has been increasing research looking at effects of more common respiratory conditions such as chronic obstructive pulmonary disease (COPD) and its relationship with heart attacks, strokes, cognitive function and sleep disturbances, few data are available on the relationship between bronchiectasis and certain neurological diseases and cardiovascular risk factors such as hypertension, diabetes mellitus and atrial fibrillation. Furthermore, few have looked at how a patient’s sleep and quality of life are affected in bronchiectasis who could be suffering from increased sputum production and regular nocturnal coughing, potentially leading to more arousals and impairment in daytime function.
In this review, we aim to highlight existing literature on the relationship between bronchiectasis and neurological conditions, such as stroke, cognitive function and cerebral infection, as well as discussing effects on sleep disturbances in patients with bronchiectasis.

2. Stroke and Its Associated Risk Factors

There have been studies associating bronchiectasis with some neurological conditions such as type 1 Arnold-Chiari malformation, cerebral palsy and ataxia telangiectasia (AT) [65,66,67]. The presumed pathophysiology behind this association is recurrent aspirations from the neurological condition leading to repeated chest infections, eventually causing both post-inflammatory bronchiectasis and lung parenchymal damage [67,68].
Cerebral palsy is associated with many respiratory conditions, such as asthma, recurrent pneumonia, bronchiectasis and obstructive sleep apnea [69]; the pathophysiology is multi-factorial. In cerebral palsy, many patients suffer from kyphoscoliosis, which can affect normal respiratory muscle function and decrease chest wall compliance [67]. Patients who have cerebral palsy can have severe neurocognitive impairment and have no spontaneous cough or an insufficiently forceful cough [69]. The swallowing mechanism is also often abnormal owing to dystonia and poor coordination in cerebral palsy [70]. Gastroesophageal reflux is more prevalent in children with cerebral palsy [71], which, if taking into account impaired cough and swallowing mechanism, may lead to chronic micro-aspiration, recurrent lower respiratory tract infections, ongoing airway inflammation and secondary bronchiectasis.
Ataxia telangiectasia, an autosomal recessive disorder due to a gene defect in chromosome 11q22.3, is associated with progressive lung disease, which is a major cause of morbidity and mortality in patients with AT [65]. Many patients with AT have difficulty with coordination of swallowing and may aspirate foods, liquids, and oral secretions [72,73]. In addition, neuromuscular weakness can result in decreased tidal volumes and ineffective cough, rendering AT patients unable to clear respiratory secretions effectively [74]. Many AT patients also suffer from immunodeficiency, making them more prone to protracted infections [75].
In the case report by Campisi, a 54-year-old woman with type 1 Arnold-Chiari malformation presenting with recurrent aspiration-induced pneumonia was found to have cylindrical bronchiectasis [66]. The postulated mechanism for recurrent aspiration is stretch injury to the lower cranial nerves from caudal displacement of medulla or compression of the swallowing centres in the brainstem [76]. This study also performed polysomnography to investigate daytime fatigue, which revealed central sleep apnea, again considered to be due to abnormalities in respiratory control from Arnold-Chiari malformation.

Bronchiectasis may be related to diseases in multiple body systems, including the neurological system, and is associated with an increased risk of stroke and cerebral infection, impaired cognitive function and impact on sleep quality in patients with bronchiectasis. Further research is required in this area, and to evaluate whether early intervention can prevent or reduce some of these potential neurological sequelae. From a clinical perspective, a holistic approach that includes an assessment of neuropsychological and sleep disorders in patients with bronchiectasis is warranted.

All authors contributed equally to this manuscript. 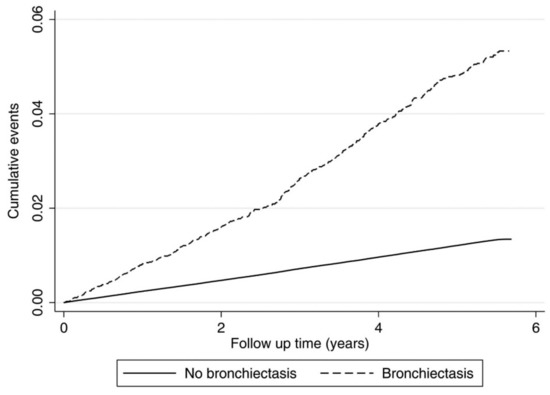