The Interventricular Septum: Structure, Function, Dysfunction, and Diseases
Next Article in Special Issue

Benchmark of Intraoperative Activity in Cardiac Surgery: A Comparison between Pre- and Post-Operative Prognostic Models
Previous Article in Special Issue

Open Treatment of Abdominal Aortic Aneurysm in the Endovascular Era

:
Background: Aneurysm shrinkage has been proposed as a marker of successful endovascular aneurysm repair (EVAR). We evaluated the impact of sac shrinkage on secondary interventions, on survival and its association with endoleaks, and on compliance with instructions for use (IFU). Methods: This observational retrospective study was conducted on all consecutive patients receiving EVAR for an infrarenal abdominal aortic aneurysm (AAA) using exclusively Endurant II/IIs endograft from 2014 to 2018. Sixty patients were entered in the study. Aneurysm sac shrinkage was defined as decrease ≥5 mm of the maximum aortic diameter. Univariate methods and Kaplan–Meier plots assessed the potential impact of shrinkage. Results: Twenty-six patients (43.3%) experienced shrinkage at one year, and thirty-four (56.7%) had no shrinkage. Shrinkage was not significantly associated with any demographics or morbidity, except hypertension (p = 0.01). No aneurysm characteristics were associated with shrinkage. Non-compliance with instructions for use (IFU) in 13 patients (21.6%) was not associated with shrinkage. Three years after EVAR, freedom from secondary intervention was 85 ± 2% for the entire series, 92.3 ± 5.0% for the shrinkage group and 83.3 ± 9% for the no-shrinkage group (Logrank: p = 0.49). Survival at 3 years was not significantly different between the two groups (85.9 ± 7.0% vs. 79.0 ± 9.0%, Logrank; p = 0.59). Strict compliance with IFU was associated with less reinterventions at 3 years (92.1 ± 5.9% vs. 73.8 ± 15%, Logrank: p = 0.03). Similarly, survival at 3 years did not significantly differ between strict compliance with IFU and non-compliance (81.8 ± 7.0% vs. 78.6 ± 13.0%, Logrank; p = 0.32). Conclusion: This study suggests that shrinkage ≥5 mm at 1-year is not significantly associated with a better survival rate or a lower risk of secondary intervention than no-shrinkage. In this series, the risk of secondary intervention regardless of shrinkage seems to be linked more to non-compliance with IFU. Considering the small number of patients, these results must be confirmed by extensive prospective studies.
Keywords:
abdominal aortic aneurysms; endovascular aneurysm repair (EVAR); Endurant; sac shrinkage; predictive factors

Since the introduction of endovascular aneurysm repair (EVAR) by Parodi, et al. in 1991 [1], EVAR has become the most-used method for abdominal aortic aneurysm (AAA) repair and, according to recent European guidelines, is now the preferred strategy whenever possible [2]. Although there is a clear early survival benefit to EVAR, when compared to open surgery [2], this early benefit weakens over time, due to rare secondary rupture, non-exceptional conversion to open repair and recurrent endovascular secondary procedures, as shown by randomized controlled trials and large cohort trials [3,4,5,6].
Sac shrinkage, defined as a reduction of ≥5 mm of the maximum sac diameter, is considered a reliable indicator of success [5,7], and is associated with better outcomes compared to stable or enlarging aneurysms [6,8,9]. However, predictors of sac behavior after EVAR, such as aneurysm neck length, angle and diameter, aneurysm sac diameter, thrombi and calcifications, as well as strict compliance with instructions for use (IFU), are still under discussion [10,11,12,13].
The aim of this study was to evaluate the association between sac shrinkage and secondary intervention, as well as survival following EVAR in a single center, taking into account compliance with IFU.

Data were retrieved from the vascular unit database, SecuTrial® (interActive Systems GmbH, Berlin, Germany) and the CHUV electronic patient database. All data were anonymized.
Data from CTAs were analyzed with Vue-PACS® (Carestream Health, Ontario, ON, Canada). Preoperative CTAs were compared to postoperative CTAs, both with 1 mm slices and centerline measurements using outer-to-outer diameters. If more than one postoperative CTA was done, the second of the two scans was considered the index CTA compared to the preoperative CTA.
Briefly, the following imaging data, taken from CTAs, were examined: neck diameter with four measurements starting from the level of the lowest renal artery with the calculation of the maximum diameter; neck length calculated as the distance between the lowest renal artery and the beginning of the aneurysm sac; degree of suprarenal neck angulation, calculated according to van Keulen, et al. [14] as the angle between the longitudinal axis of the suprarenal aorta and the longitudinal axis of the abdominal aortic aneurysm. In addition, thrombi and calcification at the aneurysm neck were measured according to wall extent. Thrombi or calcification present in one quadrant of the neck circumference was coded 25%, 50% in two quadrants, 75% in three quadrants and 100% in four quadrants.
The maximum aneurysm sac diameter was measured using the centerline. Aneurysm sac calcification was measured, as neck calcification, as a percentage of the circumference covered. We measured the maximum aortic diameter (MAD) of the sac, and the size of the flow lumen maximum diameter (FLMD), to calculate the thrombus index (TI) of the sac, using the formula TI = [(MAD − FLMD)/MAD]. Patency of the inferior mesenteric artery (IMA), and the number of patent lumbar arteries within the sac, were also evaluated by CTA, together with the maximum diameter of each common iliac artery (CIA). According to Rouby, et al. [15], any CIA of a maximum diameter ≥17 mm was classified as an aneurysm.
Finally, endoleaks were classified as Type I, Type II, or Type III. Compliance with the instructions for use (IFU) for Endurant® endoprosthesis (https://www.medtronic.com/us-en/healthcare-professionals/products/cardiovascular/aortic-stent-grafts/endurantii/indications-safety-warnings.html, accessed on 27 May 2022) was analyzed, including neck length ≥10 mm, neck angulation ≤60 degrees, neck diameter 19–32 mm, and iliac diameter 8–25 mm. IFU were coded as a single binary variable. Any EVAR procedure with a single unmet IFU instruction was classified as non-compliant. Patient demographics; clinical features; and preoperative cardiological [16], respiratory [17] and renal [18] assessments were evaluated with ASA scoring, and entered into the database.

The primary efficacy outcomes were (1) a 1-year shrinkage rate and (2) an aneurysm-related reintervention rate. According to the Society of Vascular Surgery’s guidelines [5], sac shrinkage was defined as a decrease of ≥5 mm of the preoperative maximum AAA sac diameter. For analysis purposes, the cohort was divided into two groups: (A) sac shrinkage with a maximum diameter reduction of ≥5 mm) and (B) no shrinkage, defined as stabilization (maximum diameter reduction of <5 mm) or expansion (maximum diameter increase of >5 mm). The primary safety outcome was patient survival.

Univariate analysis was performed using t-test or ANOVA for normally distributed continuous variables and Wilcoxon rank-sum test for non-normally distributed continuous variables. Fisher’s test (two-sided) was used for categorical variables. Patient survival, shrinkage during follow-up and freedom from reintervention were calculated by the Kaplan–Meier method. The Logrank test was used to compare groups of interest. A p-value <0.05 was used to assess statistical significance. All analyses were performed with SPSS V.28 (IBM Corp) and R version 4.1.1 (The R Foundation for Statistical Computing).

A one-way, between-groups analysis of variance was conducted to explore the impact of neck length, neck diameter and neck angle on sac shrinkage (Table 2). There was no statistically significant difference at p < 0.05 level in AAA shrinkage for these variables. Similarly, AAA maximum diameter, AAA thrombus index, iliac aneurysm, IMA patency and number of patent lumbar arteries within the aneurysm were not significantly associated with sac shrinkage. Finally, non-compliance with instructions for use (IFU) in 13 patients (21.6%) was not significantly associated with sac shrinkage (Table 2).

In this series, 13 patients (21.6%) received an Endurant II endograft outside the recommended IFU. Among those, eight patients had a neck angle >60°, two patients a neck length <10 mm, four patients a neck diameter >32 mm, and four patients an iliac aneurysm diameter >25 mm. Five patients had more than one instruction outside IFU. In this study, failure to comply with at least one IFU instruction had no significant impact on sac shrinkage at 1 year (Table 2).
However, as shown in Table 3, 4/12 patients (41.7%) outside IFU presented a type I/III endoleak, compared to 2/48 patients (4.2%) within IFU (p = 0.01). Similarly, 3/12 patients (25.0%) outside IFU had to undergo a secondary intervention compared to 3/48 (6.3%) patients within IFU (p = 0.05). A life table with Kaplan–Meier plots found, at 3 years, a freedom from the secondary intervention of 92.1 ± 5.9% in the compliant group vs. 73.8 ± 15% in the non-compliant group (Logrank: p = 0.03) (Figure 5). It should be noted that the higher risk of secondary intervention in the non-compliant group was not associated with a significant difference in sac shrinking (Table 2).

Limitations of the Study

This study has several limitations. Firstly, it is a retrospective study from a single center. The small number of patients included in this observational study, with short follow-up, probably underestimated the importance of the correlation between non-compliance with IFUs and the absence of AAA shrinkage. Nevertheless, despite these limitations, we demonstrated the importance of compliance with IFU specific to this endoprosthesis, but due to the observational nature of the study, we could not prove a causal relationship. Moreover, as this study pertains only to Endurant ® endografts, our results are only applicable to this brand of endografts.

This study suggests that shrinkage ≥5 mm at 1-year is frequent but not significantly associated with a better survival rate or a lower risk of secondary intervention compared with no shrinkage. In this series, the risk of secondary intervention regardless of shrinkage seems to be linked more to non-compliance with IFU. Considering the small number of patients, these results will need to be confirmed by large prospective studies.

The study was conducted in accordance with the Declaration of Helsinki, and approved by the Ethics Committee of the Canton de Vaud (protocol number 2018-01621, accepted 3 September 2019). 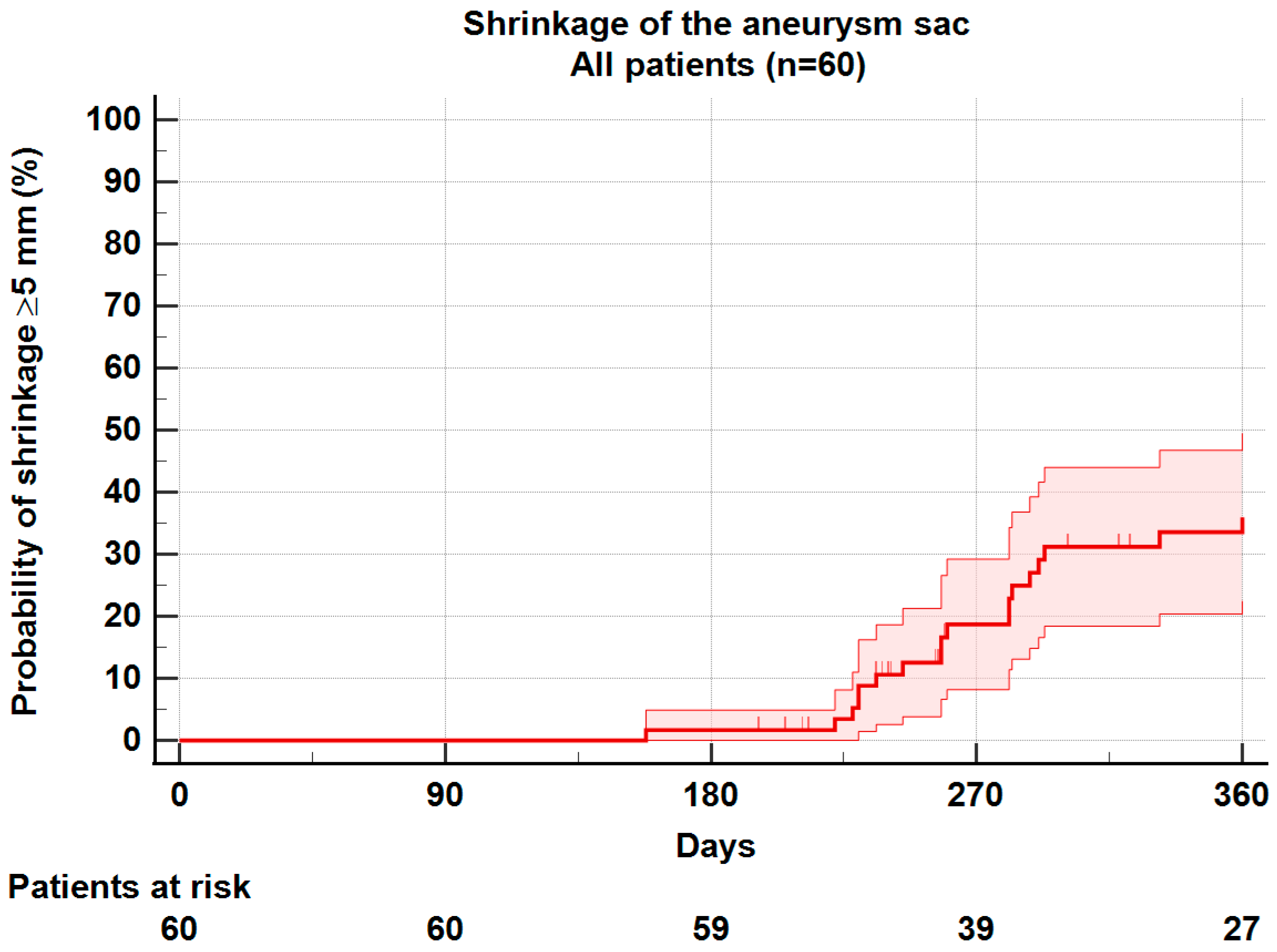 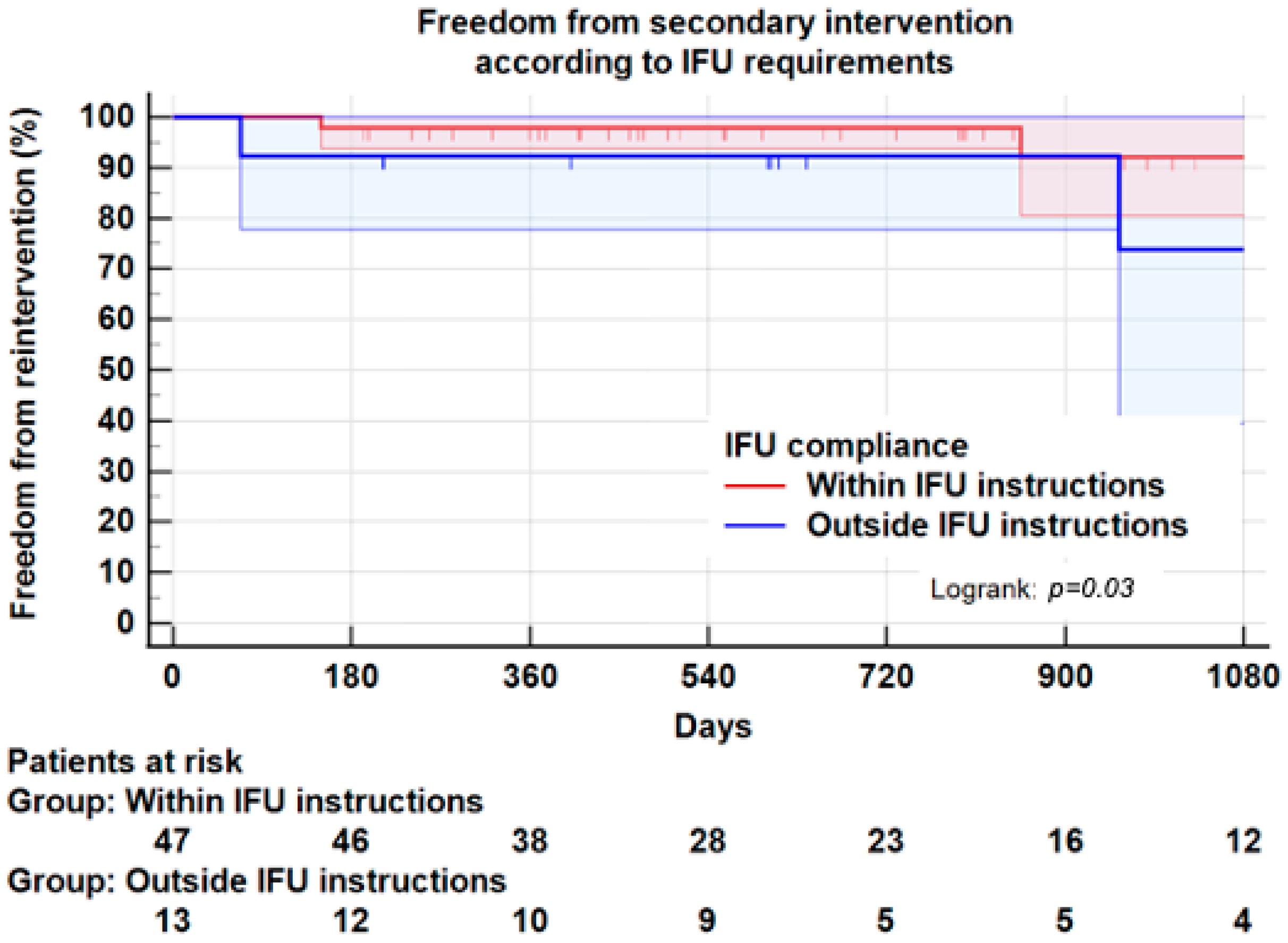