Background: As Cystic Fibrosis (CF) treatments drastically improved in recent years, tools to assess their efficiency need to be properly evaluated, especially cross-sectional imaging techniques. High-resolution computed tomography (HRCT) scan response to combined lumacaftor- ivacaftor therapy (Orkambi®) in patients with homozygous for F508del CFTR has not yet been assessed. Methods: We conducted a retrospective observational study in two French reference centers in CF in Marseille hospitals, including teenagers (>12 years old) and adults (>18 years) who had received lumacaftor–ivacaftor and for whom we had at disposal at least two CT scans, one at before therapy and one at least six months after therapy start. CT scoring was performed by using the modified version of the Brody score. Results: 34 patients have been included. The mean age was 26 years (12–56 years). There was a significant decrease in the total CT score (65.5 to 60.3, p = 0.049) and mucous plugging subscore (12.3 to 8.7, p = 0.009). Peribronchial wall thickening (PWT) was significantly improved only in the adult group (29.1 to 27.0, p = 0.04). Improvements in total score, peribronchial thickening, and mucous pluggings were significantly correlated with improvement in FEV1 (forced expiratory volume in 1 s). Conclusions: Treatment with lumacaftor–ivacaftor was associated with a significant improvement in the total CT score, which was mainly related to an improvement in mucous pluggings.
Keywords: computed tomography; cystic fibrosis; lumacaftor; ivacaftor; CFTR regulator computed tomography; cystic fibrosis; lumacaftor; ivacaftor; CFTR regulator

Cystic fibrosis is an autosomal recessive genetic disease caused by mutation in the gene that codes for the cystic fibrosis transmembrane conductance regulator (CFTR) protein, regulating the transport of sodium and chlorine ions through epithelial cells [1]. These abnormalities are responsible for an alteration in the function of many organs, dominated by the impairment of respiratory function.
In the past 50 years, and despite the lack of specific treatment available until recently, average life expectancy has increased considerably, from five years in the 1960s to about 40 years now [1]. F508del, the most common CFTR mutation that causes CF, is found in up to 80% to 90% of people with CF with more than 50 percent of these patients being homozygous for this mutation.
Lumacaftor–ivacaftor therapy is the first specific treatment for patients with homozygous F508del mutation. The efficacy and safety of this dual therapy has been demonstrated in phase 3 clinical trials. The drug acts as a corrector and potentiator for the CFTR protein (CFTR modulator). It combines lumacaftor (which is designed to fix the defective CFTR protein, and can move to the proper place on the cell surface) with ivacaftor (which helps improve the function of the protein as a chloride channel on the cell surface) [2,3].
The United States Food and Drug Administration and the European Medicines Agency approved the use of this combined therapy in patients homozygous for the F508del mutation in 2015. The French National Authority for Health did the same in 2016. However, the heterogeneity of the clinical response, leading some teams to define predictive factors to the efficacy, and the cost of treatment have hampered its use in some countries [4,5,6].
Recently, a study conducted by Burgel et al. in the 47 CF reference centers in France has evaluated the efficacy and safety of this lumacaftor–ivacaftor combined therapy in a real-life post-approval setting, on 845 CF patients (292 adolescent >12 years, 553 adults) from 1 January to 31 December 2016. This real-life study confirmed the efficacy of such treatment with improvement in lung disease (ppFEV1), nutritional status body mass index (BMI) and decrease in number of intravenous antibiotic courses in patients who tolerated combined therapy [7]. However, evolution computed tomographic (CT) changes, and assessment of bronchial and parenchymal lesions under therapy has not been specifically evaluated. With increasingly reduced irradiation doses, chest CT offers a sensitive and accurate alternative to spirometry in the therapeutic follow-up of these CF patients [8].
The aim of our study was to assess HRCT changes in cystic fibrosis patients treated with lumacaftor–ivacaftor. The secondary objectives were to look for a correlation between CT scan changes, ppFEV1, and sweat chloride test.

A retrospective observational, non-randomized, and non-blinded study has been conducted in two French cystic fibrosis centers from Marseille University Hospitals, (Hôpital de la Timone and Hôpital Nord, Assistance Publique-Hôpitaux de Marseille, France) carried out from January 2016 to June 2019. Adolescents (>12 years) and adults (>18 years) homozygous for F508del mutation who received combined therapy with lumacaftor and ivacaftor were included in this study. All subjects underwent a baseline CT scan prior to initiation of treatment and a follow-up CT scan after at least six months of treatment. The treatment consisted of two daily oral doses (200 mg lumacaftor/125 mg ivacaftor per tablet). Patients and their parents (for minors) were informed that the tablets had to be taken with a fatty food. Patients were included only if the treatment had been well conducted until the follow-up CT scan. All patients or parents approved the study and signed an informed consent.

We analyzed two CT scans, one performed prior to treatment initiation (baseline CT scan) and a follow-up CT scan performed after at least six months of well-conducted treatment. CT scans were performed during routine follow-up, in clinically stable patients. The adolescent population was evaluated on a Siemens Somatom Definition scanner (Timone Hospital, Siemens, Erlangen, Germany) and the adult population was evaluated at North Hospital, on a GE Optima 660 CT scanner (General Electrics, Milwaukee, Wisconsin). The acquisition parameters varied from 80 to 120 kilovolts (kV) with systematic use of an automatic dose modulation system. Two acquisitions were performed, without injection of contrast medium, one in inspiration and the other in expiration, with the use of a spatial reconstruction filter. The Dose-Length Product (DLP) was collected for each scanner. CF structural lung disease was evaluated by one radiologist using the Brody Scoring system who was trained by a thoracic radiologist. Each scanner was evaluated using the modified Brody scoring method. The choice was made not to multiply the readings because the intra- and inter-observer reproducibility of the Brody score had already been evaluated [9,10]. CT scans were not anonymized, and the radiologist could compare baseline CT scan and follow-up CT scan.

Each lung was divided into three lobes (culmen and lingula separated on the left), and for each lobe the presence, extension, and severity of the lesions classically induced by cystic fibrosis were evaluated: mucous plugging, peribronchial wall thickening, bronchiectasis, parenchymal opacities, and air trapping (Appendix A). Bronchiectasis was identified by a bronchoarterial ratio >1, non-tapering bronchus, a bronchus within 1 cm of the costal pleura, or a bronchus abutting the mediastinal pleura. Peribronchial wall thickening was defined as a bronchial wall thickness >2 mm in the hila, 1 mm in the central lung and 0.5 mm in the peripheral lung. Mucous plugging was defined as an opacity filling a defined bronchus or presence of either dilated mucous-filled bronchi or peripheral thin branching structures or centilobular nodules. Air trapping was defined as areas of lung on the expiratory images that remained similar in attenuation to the appearance on inspiratory. The parenchyma score depended on the existence of condensations, ground glass opacities, cysts, or bullaes. Extension defined the percentage of involvement in the central and peripheral lung (absence, less than one third, between one and two thirds, and more than two thirds of a lobe).
All the subscores obtained were added together and then normalized on a scale of 100 to obtain a total score.

Continuous variables are presented as mean ± (minimum–maximum) or mean ± standard deviation. Their pre- and post-evolutions were tested using paired-t tests or paired Wilcoxon tests (when n < 30). The Pearson correlation coefficient was used to study the relationship between the different evolutions. The threshold of significance for all bilateral tests was set at p < 0.05. Statistical analyses were performed using IBM SPSS Statistics 20.0 (IBM Inc., Armonk, NY, USA).

The study was conducted according to the guidelines of the Declaration of Helsinki, and approved by the Institutional Review Board of Assistance Publique des Hôpitaux de Marseille (protocol 2019_171, date of approval: 12 May 2019).

The authors would like to thank Pascale POOS, Geneviève MOUTON, Amandine MELIS for their helpful contribution. 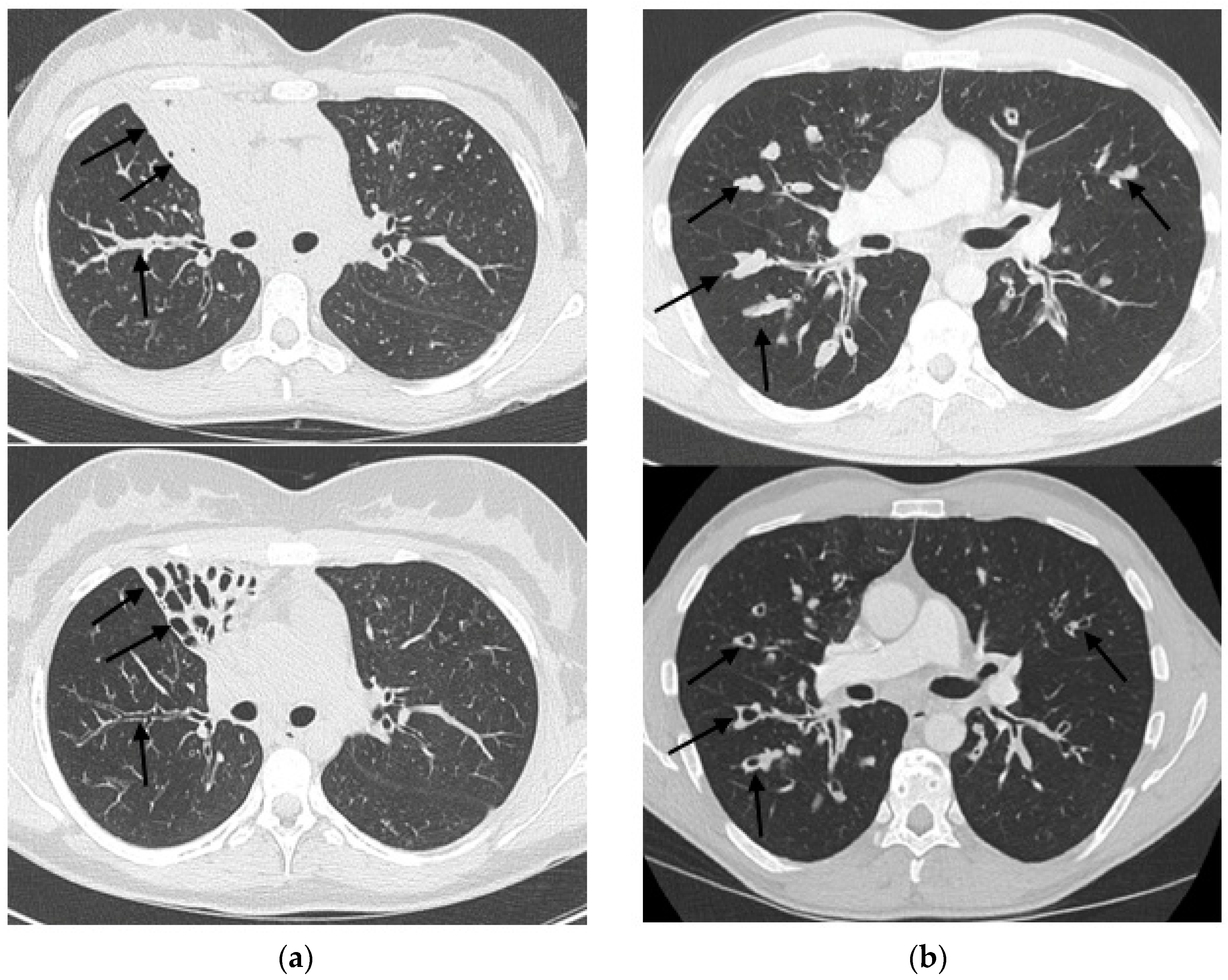