Background: As Cystic Fibrosis (CF) treatments drastically improved in recent years, tools to assess their efficiency need to be properly evaluated, especially cross-sectional imaging techniques. High-resolution computed tomography (HRCT) scan response to combined lumacaftor- ivacaftor therapy (Orkambi®) in patients with homozygous for F508del CFTR has not yet been assessed. Methods: We conducted a retrospective observational study in two French reference centers in CF in Marseille hospitals, including teenagers (>12 years old) and adults (>18 years) who had received lumacaftor–ivacaftor and for whom we had at disposal at least two CT scans, one at before therapy and one at least six months after therapy start. CT scoring was performed by using the modified version of the Brody score. Results: 34 patients have been included. The mean age was 26 years (12–56 years). There was a significant decrease in the total CT score (65.5 to 60.3, p = 0.049) and mucous plugging subscore (12.3 to 8.7, p = 0.009). Peribronchial wall thickening (PWT) was significantly improved only in the adult group (29.1 to 27.0, p = 0.04). Improvements in total score, peribronchial thickening, and mucous pluggings were significantly correlated with improvement in FEV1 (forced expiratory volume in 1 s). Conclusions: Treatment with lumacaftor–ivacaftor was associated with a significant improvement in the total CT score, which was mainly related to an improvement in mucous pluggings. View Full-Text
Keywords: computed tomography; cystic fibrosis; lumacaftor; ivacaftor; CFTR regulator computed tomography; cystic fibrosis; lumacaftor; ivacaftor; CFTR regulator
►▼ Show Figures 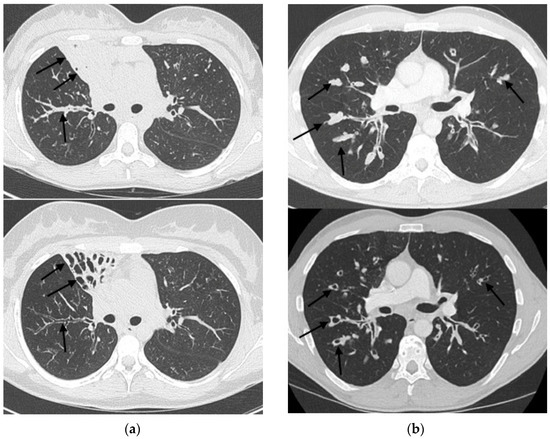