The incidence of intrahepatic cholangiocarcinoma (iCCA) has increased over recent decades [1,2,3]. This might be due to improvements in diagnostic tools or increases in metabolic disorders and obesity [4]. Advances in local therapies, targeted chemotherapies and adjuvant chemotherapy are promising [5,6,7,8]; however, liver resection remains the only potential curative therapy [9,10]. At presentation, about 50% of patients have unresectable disease and another 30% will be found unresectable during surgical exploration [11]. Therefore, the resectability rate of iCCA is described as 15–35% [11,12,13]. When the tumor is confined to the liver, complete tumor resection results in a 5-year survival rate of up to 40% [11,13,14,15]. The survival and recurrence rates are affected by nodal metastasis, tumor size, multifocal tumor growth and macrovascular invasion [12,16]. Central localization of iCCA is quite common and vascular invasion of the hepatic veins is often a limiting factor for R0-resection. Regarding these circumstances, non-conventional surgical techniques, such as ante situm procedures, offer a possibility for resection [17,18,19,20,21]. In addition, portal vein resection is often needed and complex constructions are described as safe for selected patients in high-volume centers [9,22,23].
A sufficient future liver remnant (FLR) is critical in decreasing postoperative morbidity and mortality [24,25]. Tumor size and location represent important factors for the resection strategy. Not seldom, complex liver resections such as meso-hepatectomy or trisectionectomy with reconstruction of the extrahepatic biliary duct are necessary [12,26].
In case of a non-sufficient FLR, portal vein embolization (PVE) or associating liver partition and portal vein ligation for staged hepatectomy (ALPPS) are strategies to enhance FLR [12]. Whereas PVE is considered as safe and standard technique for small FLR [9,27], the role of ALPPS is currently controversially discussed [28,29,30].
However, in liver resection for iCCA, the main focus is to accomplish R0-resection, even with the use of complex surgical techniques, such as ante situm or extended resections with or without vascular reconstructions, if necessary. The aim of this study is to analyze the role of complex liver resections for iCCA in terms of morbidity and long-term survival.

Consecutive patients that underwent surgery for iCCA between January 2010 and December 2020 at the Division of Hepatobiliary and Pancreatic Surgery in the Asklepios Hospital Barmbek were included in this retrospective study. Data were obtained from a prospectively collected database.
All included patients were divided into three groups:

Data are reported as median with interquartile range (IQR), and n with percentages (%), where appropriate. Continuous variables were compared with the Mann–Whitney U and Kruskal–Wallis tests, where appropriate. Differences among proportions from categorical data were compared using the Fisher’s exact or the Pearson v2 tests, where appropriate. Survival analysis was performed using Kaplan–Meier curves. Patients lost to follow-up or follow-up time ended were censored. Differences in survival were compared using the log-rank test. All p-values in the univariate analysis were 2-sided and considered statistically significant if p ≤ 0.05. Cox regression analysis was performed to identify independent predictors of overall survival. Statistical analysis was performed using SPSS, version 27 for Windows (IBM, Armonk, NY, USA).

No differences could be seen between the groups regarding age, gender, and comorbidities (Table 1). Union for International Cancer Control (UICC) stages were significant different between the groups. Stage IV was highest in the complex (51%) and exploration group (82%), but only 29% for conventional resections. With 64%, the early stages (Stage I and II) were most common for conventional resections, whereas it was low for complex (37%) and exploration (18%).

Operation time, incidence of hepaticojejunostomies, use of intraoperative transfusions and blood loss were significantly highest for the complex group (Table 2). The use of pringle maneuver was significant, but comparable between complex and conventional resections. R0-resection was achieved in 63% of patients undergoing complex resections and 86% for conventional resections.
Details of all four ante situm resections are shown in Table 3. All four patients underwent major hepatectomy and resection of the vena cava with reinsertion of the hepatic veins. Negative resection margins (R0) were detected in all four patients and only one had major postoperative complications. An example is shown in Figure 1.

The overall complication rate and CCI were highest in the group with complex liver resections (Table 4). This applies to bile leakage, postoperative bleeding, and infections, but not to PHLF. Perioperative mortality was significantly different, but comparable between the complex (10%) and exploration group (7%). The 90-day mortality rate was highest in the exploration group (25%), compared to the complex group (14%). Perioperative and 90-day mortality was low for conventional liver resections (0% and 1%).

Liver resection is the only curative treatment option for iCCA, and therefore, major efforts should be made to achieve tumor resection [9,10,12]. ICCAs are frequently centrally localized and often infiltrate portal and hepatic veins. Therefore, to achieve complete tumor removal, complex liver resections with vascular reconstructions including two-stage procedures are often necessary. In some circumstances, only ante situm resection represents the sole surgical option.
It is well-known that complex liver resections are generally associated with an increased morbidity and mortality [12,36,37]. This was clearly observed in the present study. The CCI with a median of 29.6 was significantly higher in the group after complex liver resections compared to the group after conventional liver resections with a CCI of 8.7. The documented mortality rate of 10% after complex liver resections with vascular reconstructions including ALPPS is high but lies within the published range and reflects the complexity of the procedure [22,23]. In a recent multicenter study of 270 patients with vascular resection in combination with liver resection for iCCA, Conci et al. reported a mortality rate of 6.7% for patients after portal vein resection and 12.5% after vena cava resection [23]. Reames et al. reported a 90-day mortality rate of 7% after 128 liver resections with major vascular resection for iCCA in a large multi-institutional analysis [22]. PHLF represents one main reason for postoperative morbidity and mortality. In the present study, the rate was 10% in the group after complex liver resections. Generally, a small FLR is mainly the cause for PHLF. Various hypertrophy concepts such as PVE or ALPPS are available to increase the FLR. However, the use of ALPPS for iCCA has been a matter of debate since its introduction [38]. Recently, Li et al. could show in a group of 102 patients with advanced iCCA from the ALPPS registry that the initially high rates of morbidity and mortality decreased steadily to a 29% severe complication rate and 7% 90-day mortality in the last 2 years [28]. Furthermore, Li et al. reported a high efficacy of 85% in achieving R0 resections. However, they only have seen an overall survival benefit for ALPPS in patients with a single lesion, not in patients with multiple lesions and, therefore, recommend ALPPS for this group [28].
A novel procedure to increase FLR is hepatic vein embolization in combination with PVE [39], which shows promising results for FLR hypertrophy compared to ALPPS [39,40,41]. Even for extended resection, the embolization of the right and middle hepatic vein is described [42]. The role of hepatic vein embolization for iCCA needs to be investigated, but seems to be a promising tool for future resection strategies [43].
It is noteworthy that we had a 0% mortality rate after our ante situm resections. The experience with ante situm resections for iCCA is limited; mostly case reports or case series are available [17,19,21,44,45]. Without doubt, the surgical procedure is challenging due to the use of an extracorporeal bypass, in situ cold perfusion and complex vascular reconstruction of the IVC and hepatic veins. However, ante situm resection offers a reasonable chance of good, long-term outcome. One may speculate that in some circumstances, ante situm or in situ resections after cold perfusion with the aim of parenchymal-sparing might be superior to complicated long-lasting two-stage procedures.
Patients with unresectable tumors have a poor prognosis [10]. During exploration, 30% of the patients that were preoperatively considered as resectable were found to be unresectable [11]. In our cohort, the survival of the exploration group was 50% at 12 months and 0% at 28 months. Surprisingly, a high 90-day mortality rate of 25% was observed in this group. This is most likely due to the fast tumor progression, which highlights the aggressiveness of iCCA. In addition, for large central iCCA, reconstruction of the bile duct is necessary, because of liver hilum involvement. In those patients, a differentiation between iCCA or perihilar cholangiocarcinoma is often challenging.
In the current study, we found no significant difference in overall survival between patients after complex and after conventional liver resections. Survival in our study depends more on resection margin status and UICC staging and not on the complexity of the resection. This is in accordance with the published data [9,10]. High UICC staging, large or multifocal tumors and vascular invasion are reported to be negative prognostic parameters in iCCA patients [12,16,46,47].
In conclusion, the effort of complex resections, such as ante situm, ALPPS, and extended resections with reconstructions of one or several hepatic vessels, is justified and results in favorable long-term outcome. Overall survival in iCCA seems to be affected by UICC stage and resections margins and not by the complexity of the surgical procedure.

No grants or financial support were received for this study.

The study was conducted according to the guidelines of the Declaration of Helsinki and approved by the Ethics Committee. 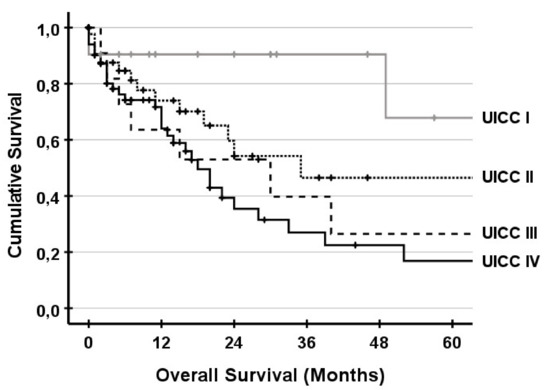 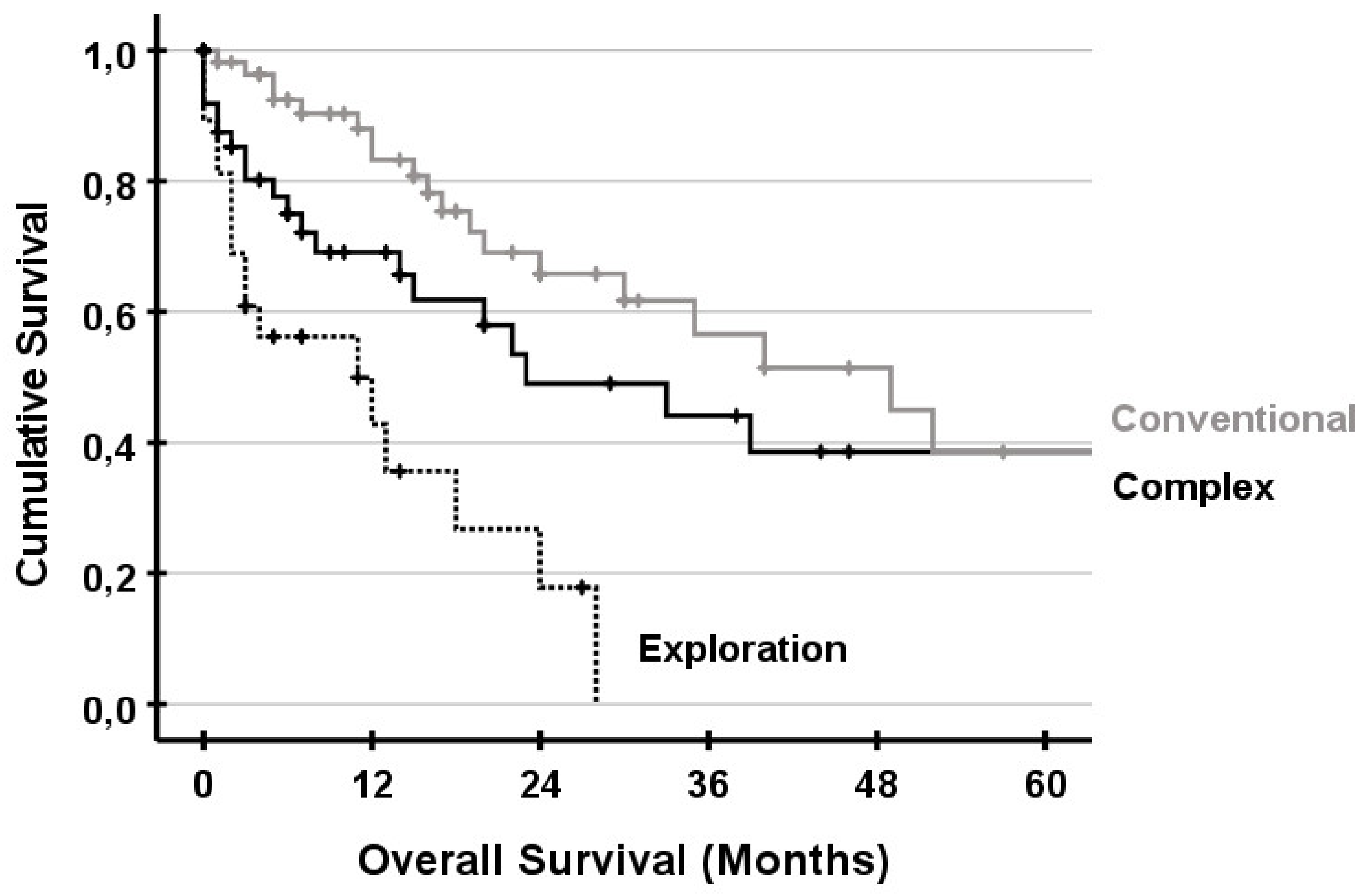 Table 5. Multivariate analysis for survival.
Table 5. Multivariate analysis for survival.
© 2021 by the authors. Licensee MDPI, Basel, Switzerland. This article is an open access article distributed under the terms and conditions of the Creative Commons Attribution (CC BY) license (https://creativecommons.org/licenses/by/4.0/).
We use cookies on our website to ensure you get the best experience. Read more about our cookies here.
Accept
We have just recently launched a new version of our website. Help us to further improve by taking part in this short 5 minute survey here. here.
Never show this again